Would Any Atrocity Turn Off Investors to Saudi Arabia?

Would Any Atrocity Turn Off Investors to Saudi Arabia? ...
nytimes.com 26/04/2019 Politics 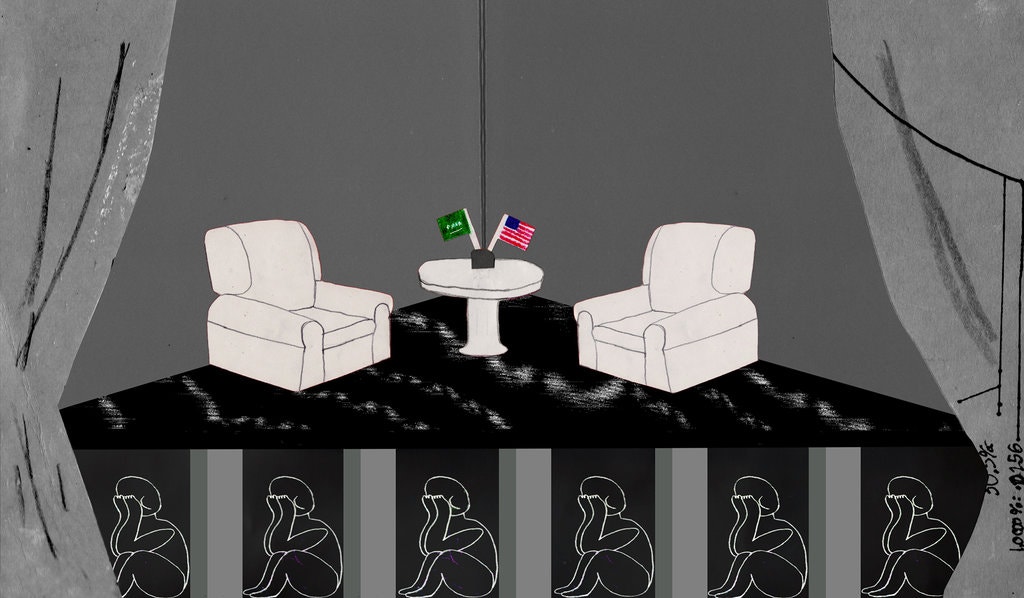 The kingdom this week executed 37 “terrorists” after torture and sham trials. Corporations and governments should demand an end to the kingdom’s egregious violations of human rights.
** CreditCreditLuyi Wang
This month, Saudi Arabia’s oil company, Aramco, revealed that it generated $111.1 billion in net income last year, making it the world’s most profitable company by far. So it is not particularly surprising that a scant six months after the murder and dismemberment of the journalist Jamal Khashoggi by government goons stunned the world, businesses and banks are once again courting the kingdom.
https://twitter.com/IlhanMN/status/1121576374639005696
"The United States needs to immediately stop arming Saudi Arabia and unequivocally condemn this brutal violence." Ilhan Omar on Twitter
https://www.reuters.com/article/us-saudi-execution-un/un-rights-boss-condemns-saudi-arabias-beheading-of-37-men-idUSKCN1S01CA
U.N. rights boss condemns Saudi Arabia's beheading of 37 men
GENEVA/DUBAI (Reuters) - The U.N. human rights chief on Wednesday condemned the beheadings of 37 Saudi nationals across the kingdom this week, saying most were minority Shi’ite Muslims who may not have had fair trials and at least three were minors when sentenced.
Saudi Arabia, which said on Tuesday it had carried out the executions over terrorism crimes, has come under increasing global scrutiny over its human rights record since the murder of journalist Jamal Khashoggi last year at the kingdom’s Istanbul consulate and the detention of women’s rights activists.
“It is particularly abhorrent that at least three of those killed were minors at the time of their sentencing,” U.N. High Commissioner for Human Rights Michelle Bachelet said in a statement issued in Geneva.
She said United Nations rapporteurs had expressed concern about a lack of due process and fair trial guarantees amid allegations that confessions were obtained through torture.
Amnesty International said late on Tuesday the majority of those executed in six cities belonged to the Shi’ite minority and were convicted after “sham trials”, included at least 14 people who had participated in anti-government protests in the kingdom’s oil-rich Eastern Province in 2011-2012.
It said in a statement that one of them, Abdulkareem al-Hawaj, was arrested when he was 16, making his execution a “flagrant violation of international law”.
London-based Amnesty said 11 of those executed had been convicted of spying for the kingdom’s arch-adversary, Shi’ite Muslim Iran, and sentenced to death in 2016.
The Shi’ite-majority Eastern Province became a focal point of unrest in early 2011 with demonstrations calling for an end to discrimination and for reforms in the Sunni Muslim monarchy. Saudi Arabia denies any discrimination against Shi’ites.
Iranian Foreign Minister Mohammad Javad Zarif said in a tweet: “After a wink at the dismembering of a journalist (Khashoggi), not a whisper from the Trump administration when Saudi Arabia beheads 37 men in one day...”
Iran and Saudi Arabia carried out the second- and third- highest number of executions respectively worldwide in 2018, after China, according to Amnesty figures.
TERRORISM CHARGES
The Saudi government’s press office did not immediately respond to Reuters’ request for comment on Bachelet’s remarks or the Amnesty report. Authorities have said the men were executed for “extremist terrorist ideologies”, forming “terrorist cells to corrupt and disrupt security” and inciting sectarian strife.
Bachelet called on Riyadh to review counter-terrorism laws and halt pending executions, including of three men on death row - Ali al-Nimr, Dawood al-Marhoon and Abdulla al-Zaher - whose cases she said had been taken up by the U.N. rights system.
Amnesty said the kingdom has stepped up the rate of executions in 2019, with at least 104 people put to death since the start of the year compared to 149 for the whole of 2018.
Tuesday’s mass execution was “another gruesome indication of how the death penalty is being used as a political tool to crush dissent from within” the country’s Shi’ite minority, said Lynn Maalouf, the group’s research director for the Middle East.
European Union foreign policy chief Federica Mogherini said the executions heightened doubts about respect for the right to a fair trial in Saudi Arabia and could fuel sectarian violence.
New York-based Human Rights Watch (HRW) said at least 33 of the 37 men put to death were Shi’ites and it was the largest set of executions in the kingdom since January 2016.
It said one of the men convicted of protest-related offences, Mujtaba al-Sweikat, was arrested in 2012 as he was about to board a plane bound for the United States to attend university.
“Mass executions are not the mark of a ‘reformist’ government, but rather one marked by capricious, autocratic rule,” HRW’s Middle East deputy director Michael Page said.
Reporting by Stephanie Nebehay in Geneva and Francesco Guarascio in Brussels with additional reporting and writing by Sylvia Westall; Editing by Mark Heinrich
--- ---
...