By Chen Aizhu and Florence Tan
SINGAPORE (Reuters) - Some 20 million barrels of Iranian oil sitting on China's shores in the northeast port of Dalian for the past six months now appears stranded as the United States hardens its stance on importing crude from Tehran.
Oil tankers pass through the Strait of Hormuz

* * * Iran sent the oil to China, its biggest customer, ahead of the reintroduction of U.S. sanctions last November, as it looked for alternative storage for a backlog of crude at home.
The oil is being held in so-called bonded storage tanks at the port, which means it has yet to clear Chinese customs. Despite a six-month waiver to the start of May that allowed China to continue some Iranian imports, shipping data shows little of this oil has been moved.
Traders and refinery sources pointed to uncertainty over the terms of the waiver and said independent refiners had been unable to secure payment or insurance channels, while state refiners struggled to find vessels.
The future of the crude, worth well over $1 billion at current prices, has become even more unclear after Washington last week increased its pressure on Iran, saying it would end all sanction exemptions at the start of May.
"No responsible Chinese company with any international exposure will have anything to do with Iran oil unless they are specifically told by the Chinese government to do so," said Tilak Doshi of oil and gas consultancy Muse, Stancil & Co in Singapore.
Iran previously stored oil in 2014 at Dalian during the last round of sanctions that was later sold to buyers in South Korea and India.
China last week formally complained to the United States over the unilateral Iran sanctions, but U.S. officials have said Washington is not considering a further short-term waiver or a wind-down period.
The 20 million barrels is equal to about a month's worth of China's imports from Iran over the past six months, or about two days of the country's total imports.
Iran says it will continue to export oil in defiance of U.S. sanctions.
A senior official with the National Iranian Tanker Company (NITC), who spoke on condition of anonymity, told Reuters: "We will continue to sell our oil."
"Iran is now desperate and will deal with anyone with steep discounts as long as they get paid somehow," said Doshi.
SOME OIL TAKEN
Some Iranian oil sent to Dalian has moved, according to a ship tracking analyst at Refinitiv.
Dan, a supertanker owned by NITC moved 2 million barrels of oil from Dalian more than 1,000 km (620 miles) to the south to the Ningbo Shi Hua crude oil terminal in March, according to Refinitiv data.
Ningbo is home to Sinopec's Zhenhai refinery, one of the country's largest oil plants with a capacity of 500,000 barrels a day and a top processor of Iranian oil.
Sinopec declined to comment.
The Iranian tanker was chartered by state-run Chinese trader Zhuhai Zhenrong Corp, according to Refinitiv analyst Emma Li. The NITC official confirmed the oil was taken by Zhuhai Zhenrong.
Zhenrong was started in the 1990s and brokered the first oil supply deals between Iran and China. At that time, Iran was supplying oil to China to pay for arms supplied by Beijing during the 1980-88 Iran-Iraq war. Zhuhai Zhenrong still specializes mainly in buying Iranian oil.
An official at the general manager's office with Zhuhai Zhenrong's office in Beijing said he could not immediately comment. The company did not reply to a fax seeking comment.
For now, more Iranian oil is heading to China, with the supertankers Stream and Dream II due to arrive in eastern China from Iran on May 5 and May 7, respectively, Refinitiv data showed.
Some of this crude may be from Chinese investments into Iranian oilfields, a sanctions grey area.
Whether China will keep buying oil from Iran remains unclear, but analysts at Fitch Solutions said in a note "there may be scope for imports via barter or non-compliance from ... China."
Muse, Stancil & Co's Doshi said the only way to get the Iranian oil out of Dalian now was by cheating.
"Only rogue parties might try to cheat the system and try to pass the Iranian oil at Dalian as something else via fraudulent docs. But I doubt this is easy or can amount to much in terms of volume."
---Some 20 million barrels of Iranian oil sitting on China's shores in the northeast port of Dalian for the past six months now appears stranded as the United States hardens its stance on importing crude from Tehran. ---
...

uk.reuters.com 31/12/2013 Economy
(Reuters) - China may buy more Iranian oil next year as a state trader is negotiating a new light crude contract that could raise imports from Tehran ...View Details»

US gives exemptions to sanctions on Iran's Revolutionary Guard ... 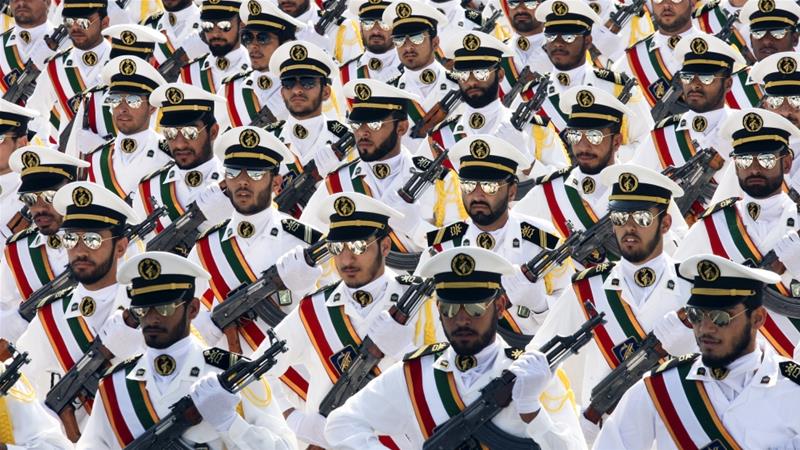 aljazeera.com 25/04/2019 Military
Governments and businesses that have dealings with the IRGC will not be subject to a ban on US travel under waivers. The Trump administration on Wedne...View Details»