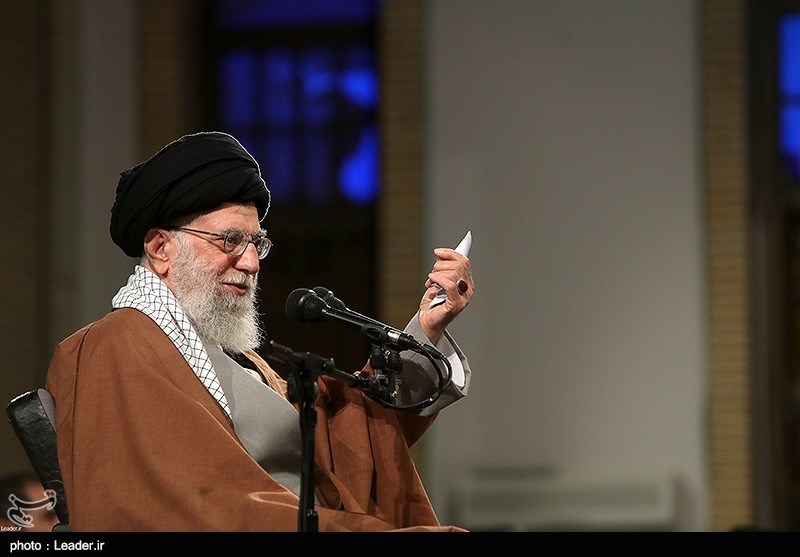 TEHRAN (Tasnim) – Leader of the Islamic Revolution Ayatollah Seyed Ali Khamenei stressed the need for the Iranian nation to take up battle formation in response to the enemy’s political, economic and intelligence onslaughts against the Islamic Republic.
May, 01, 2019 - 15:50
In an address to a gathering of Iranian teachers in Tehran on Wednesday, Ayatollah Khamenei warned of the enemy’s “battle formation” and onslaught in the economic and political spheres and its attempts for intelligence infiltration and dealing blows through the virtual space.
“The US and Zionism are plotting and acting (against Iran) in all areas,” the Leader said, adding that the current US administration has revealed the American iron fist that used to be in a velvet glove.
“In the face of the enemy’s battle formation against the Iranian nation, the nation should take up battle formation likewise,” Ayatollah Khamenei underlined.
“The enemy apparently has no battle formation in the military sphere, but our military forces are vigilant nonetheless,” the Leader said.
Reiterating the importance of unity and solidarity among all Iranian people, Ayatollah Khamenei said the enemy’s plots against Iran will backfire.
The Leader also pointed to the hostile plots aimed at causing cultural damages to Iran, saying the essence of the foreign-devised global education agenda –known as Education 2030– is promoting an educational system that trains children in Western philosophy of life, lifestyle and meaning of life.
Extolling the benefits of Iran’s own grand document on the evolution of education, the Leader stressed the need for careful implementation of the scheme.
Education 2030 is part of the 17 UN Sustainable Development Goals (SDGs).
In May 2017, Ayatollah Khamenei said Education 2030 is founded on “corrupt and devastating Western lifestyle” and is unacceptable in Islamic Iran.
--- ---
...