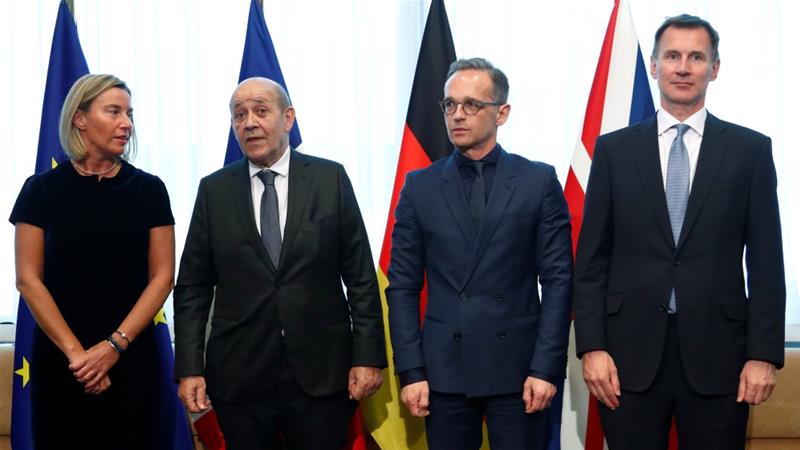 * * * European diplomats urged the United States to exercise "maximum restraint" as tensions mount in the Gulf a year after Washington withdrew from a landmark deal that curbed Iran's nuclear programme.
Federica Mogherini, the European Union's diplomatic chief, stressed the need for dialogue following a meeting with US Secretary of State Mike Pompeo, who made a last-minute visit to Brussels on Monday to share information on "escalating" threats from Iran.
The US has re-imposed punishing sanctions on Iran since its unilateral exit from the nuclear deal, negotiated between Tehran and six world powers in 2015. Last week, Washington sent naval vessels and bombers to the Middle East citing unspecified threats from Tehran.
Iran responded by declaring it will scale back compliance with parts of the nuclear deal.
Mogherini said the EU continues to fully support the accord, which imposed limits on Iran's nuclear programme in return for sanctions relief.
"It's always better to talk than rather not to, especially when tensions arise," she said.
"Mike Pompeo heard that very clearly from us today, not only from myself, but also from other EU member states, that we are living in a crucial delicate moment where the most responsible attitude to take is that of maximum restraint."
#IranDeal "We always encourage dialogue. We still invite Iran to comply with all its nuclear commitments and we will do our part on our side to continue to fully implement the nuclear deal" @FedericaMog pic.twitter.com/vjdEE7epFR
— European External Action Service - EEAS ...