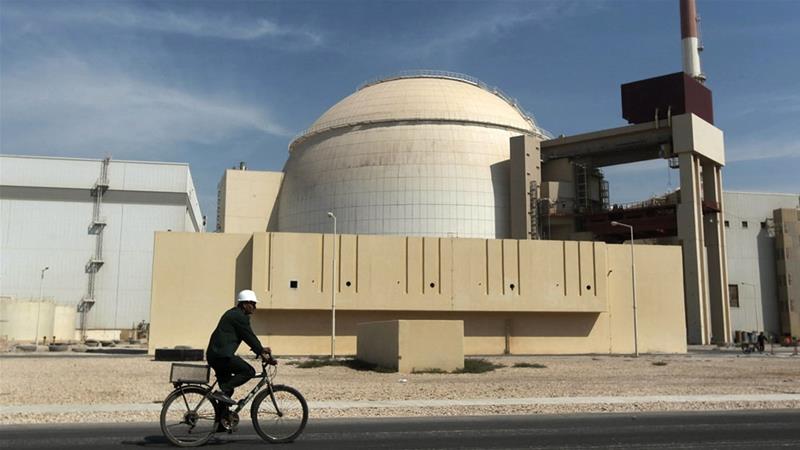 Atomic energy agency official says Iran has no limit from now on for production of enriched uranium and heavy water.
Bushehr nuclear power plant, just outside the southern city of Bushehr [Majid Asgaripour/Mehr via Reuters]

* * * Iran has officially stopped some commitments under a 2015 nuclear deal with world powers following an order from its national security council, ISNA news agency reported.
Last week, Iran notified China, France, Germany, Russia and the United Kingdom of its decision to halt some commitments under the nuclear deal, a year after the United States unilaterally withdrew from the accord and reimposed sanctions.
Under the nuclear deal, Tehran was allowed to produce low-enriched uranium with a 300kg limit, and produce heavy water with a stock capped around 130 tonnes.
Tehran could ship the excess amounts out of the country for storage or sale.
An official in the country's atomic energy body told ISNA that Iran has no limit from now for the production of enriched uranium and heavy water.
Iran's initial moves do not appear to violate the nuclear deal yet. But Iran has warned that unless the world powers protect its economy from US sanctions within 60 days, it would start enriching uranium at a higher level.
In a speech broadcast on national television on May 8, Rouhani said Iran wanted to negotiate new terms with remaining partners in the deal, but acknowledged the situation was dire.
"We felt that the nuclear deal needs a surgery and the painkiller pills of the last year have been ineffective," Rouhani said. "This surgery is for saving the deal, not destroying it."
The European Union and the foreign ministers of Germany, France and Britain said they were still committed to the deal but would not accept ultimatums from Tehran.
The deal also caps the level of purity to which Iran can enrich uranium at 3.67 percent, far below the 90 percent of weapons grade. It is also well below the 20 percent level to which Iran enriched uranium before the deal.
Iranian Supreme Leader Ayatollah Ali Khamenei said on Tuesday that Tehran does not seek war with the US despite mounting tensions between the two nations.
"There won't be any war. The Iranian nation has chosen the path of resistance," he said. "Neither we nor they seek war. They know it will not be in their interest."
Khamenei also said Tehran would not negotiate with the US on another nuclear deal.
'Orchestrating conflict'
On Tuesday, Iranian officials accused "hardliners" in the US and elsewhere of attempting to orchestrate an incident that would ratchet up tensions with Tehran.
Four ships - two Saudi, one Norwegian and one Emirati - were damaged on Sunday off the coast of the United Arab Emirates (UAE) in what Emirati officials described as acts of sabotage near the port of Fujairah.
The incident happened 140km south of the Strait of Hormuz, from where about one-third of all oil traded by sea passes through.
"We ... talked about the policies that hardliners in the US administration as well as in the region are attempting to impose," Iran's Foreign Minister Mohammad Zarif told Iranian state TV in India after a bilateral meeting with Foreign Minister Sushma Swaraj.
"We raised concerns over the suspicious activities and sabotage that are happening in our region. We had formerly anticipated that they would carry out these sorts of activities to escalate tension."
SOURCE: Al Jazeera and news agencies