US Facing Defeat in Afghanistan After 18 Years of War: Taliban

US Facing Defeat in Afghanistan After 18 Years of War: Taliban ...
telesurenglish.net 15/05/2019 Military 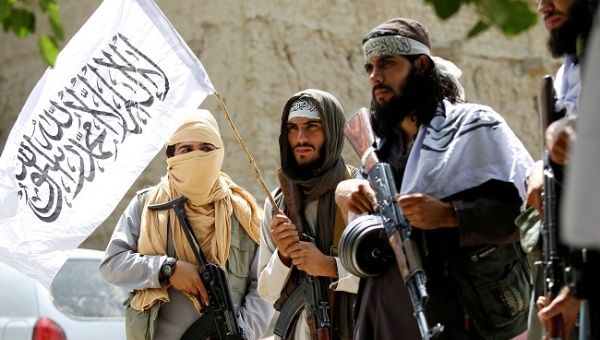 
The Taliban's chief negotiator mocked the U.S. in recent remarks, claiming that the U.S. was on the verge of defeat in Afghanistan after nearly 18 years of war.
Sher Mohammad Abbas Stanekzai, the Taliban's chief negotiator, told an "internal gathering" in Doha, Qatar on April 28th that the U.S. is on the verge of defeat in Afghanistan and will quit the war “either of their own accord, or they will be forced out.”
Taliban walk as they celebrate ceasefire in Ghanikhel district of Nangarhar province, Afghanistan | Photo: Reuters

* * * According to VOA News, Pro-Taliban social media outlets released the video of Stanekzai's speech one day after the U.S. special reconciliation envoy, Zalmay Khalilzad, and his team wrapped up the week-long negotiations with Taliban representatives in Doha.
During his speech to the gathering, Stanekzai praised what he called the bravery of the Afghan nation for defeating past British and Soviet invasions of their country and resisting the current foreign military presence, referring to the U.S.-led coalition, which is training and advising pro-government forces in battles against the Taliban.
“God has helped us defeat three super powers in the last century. The third super power that we are currently confronted with is also on the verge of defeat, inshallah (God willing). You will soon hear they also will withdraw (from Afghanistan) either of their own accord or they will be forced out,” Stanekzai told the gathering.
The U.S. military and their allies have been involved in a nearly 18-year-long war with the Taliban and Al-Qaeda inside of Afghanistan, but they still do not have full control of the country.
Former U.S. Defense Chief Robert Gates stated on Saturday that there is a "real risk" that the Taliban could retake the entire country if the U.S. Armed Forces pulled out before the Afghan government is stable. "The question is, can you negotiate an arrangement whereby the Taliban agrees to operate under the Afghan Constitution, becomes a part of the political process?"
The Taliban currently controls a large portion of the country after several offensives to regain territories they lost during the first decade of the war. ​​​​​​​