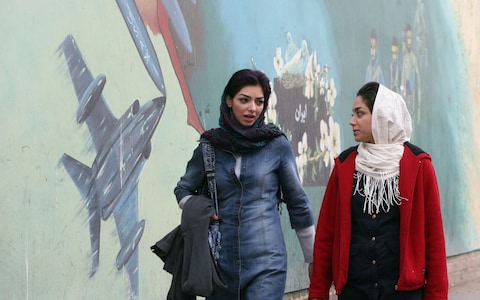 
Iran has introduced 2,000 new morality police units in reaction to what officials call an “increasing defiance” of the compulsory wearing of hijabs.
The units, called “resistance groups for verbal and practical response to bad-hijabi women”, were launched recently in the northern province of Gilan as part of a pilot scheme.
They are each made up of six women who have the power to arrest and detain those they deem to be flouting the country’s strict veiling laws.
The move comes amid a growing backlash by women in the Islamic Republic, hundreds of whom have been arrested for taking off their head coverings in public in protest at the law.
A campaign by rights activists called “White Wednesday” encouraging women to wear white and discard their hijabs has also gained support, much to the consternation of conservative clerics.
While Iran has had various forms of "morality police" since the 1979 Islamic Revolution, the decision to increase their numbers as well as introduce all-female brigades, is a sign that authorities are adopting a tougher approach.
Mohammad Abdulahpour, the commander of Gilan province’s Revolutionary Guards unit, has said that the survival of the Islamic revolution depends on the full implementation of Islamic traditions and that “the issue of hijab is not a simple matter, but rather a serious political and security issue for our country.”
“The enemy is heavily investing in changing our nation’s culture to adopt a Western lifestyle,” Mr Abdulahpour told local Tasnim news agency.
Cleric Rasoul Falahati, representative of Supreme Leader Ayatollah Khamenei in the province, condemned women who defy the hijab as an insult to the Islamic Republic.
“We do not wish to show a violent image of our religion, but models and promoters of vile fashions not only defy the hijab,” he said. “But are nowadays appearing almost naked on our streets.”
Iran’s police have also recently installed special cameras on the country’s highways to take photos of those female drivers who remove their hijab once they leave the town centres.
Women’s rights defenders across the country have joined an unprecedented protest movement against veiling laws in Iran.
Women began taking to the streets last year, silently waving their headscarves on the ends of sticks. In response, they suffered a backlash from the authorities, facing violent assault, arrest and torture, and some were jailed after what human rights groups called unfair trials.
Nasrin Sotoudeh, prominent human rights lawyer, was sentenced last May to seven years in prison after defending the protesters.
Both President Hassan Rouhani and Ayatollah Khamenei support a softer attitude toward women who do not properly follow the dress code, although hardliners who are opposed to any such easing still dominate Iran’s security forces and the judiciary.
A recent study by Iran’s parliament showed that up to 70 per cent of the female population would like to see the relaxing of laws on the mandatory wearing of headscarves, while 30 per cent accepted it as part of the national culture.

---Iran has introduced 2,000 new morality police units in reaction to what officials call an “increasing defiance” of the compulsory wearing of hijabs. ---
...