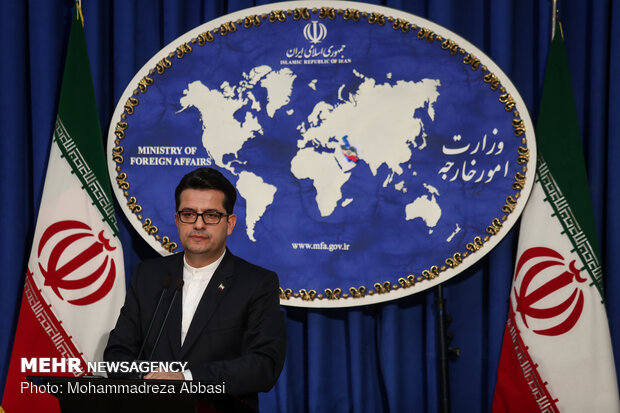 TEHRAN, Jun. 08 (MNA) – Foreign Ministry Spokesman Abbas Mousavi said Sat. the new US sanctions targeting Iran’s petrochemical industry proved Donald Trump’s empty claims for being ready for talks with Tehran.
In a statement on Saturday, Iranian Foreign Ministry Spokesman Abbas Mousavi strongly condemned the new US sanctions on Iran’s petrochemical companies, deeming the move an instance of ‘economic terrorism’ and in line with the hostile policies of the White House toward the Iranian nation.
It took only one week for the emptiness of US president’s claims for talks with Iran be surfaced, Mousavi said, stressing that the US’ policy of maximum pressure is a failed one.
The diplomat went on to describe the call for talks by some American authorities as “deceitful, untrue and merely in service of appealing to the public opinion,” adding that the US’ continued pressure on Iran and imposition of new sanctions are “contrary to the principles and rules of international relations and law, as well as the international obligations of the regime,” which will hold US accountable before the international community.
“All countries have a responsibility to react against the flagrant violations of the fundamental principles of international law and not to allow the international community's achievements in multilateralism to be further ruined by the bullying and unilateral actions of the American governing body,” Mousavi concluded.
On Friday, the United States imposed new sanctions on Iran that target the country's petrochemical industry, including its largest petrochemical holding group, the Persian Gulf Petrochemical Industries Company (PGPIC).
The US Treasury also designated the holding group's network of 39 subsidiary petrochemical companies and foreign-based sales agents.
CEO of the Persian Gulf Petrochemical Industries Company (PGPIC), in reaction to the sanctions, said the group would continue with calm and according to its previous plans.
--- ---
...