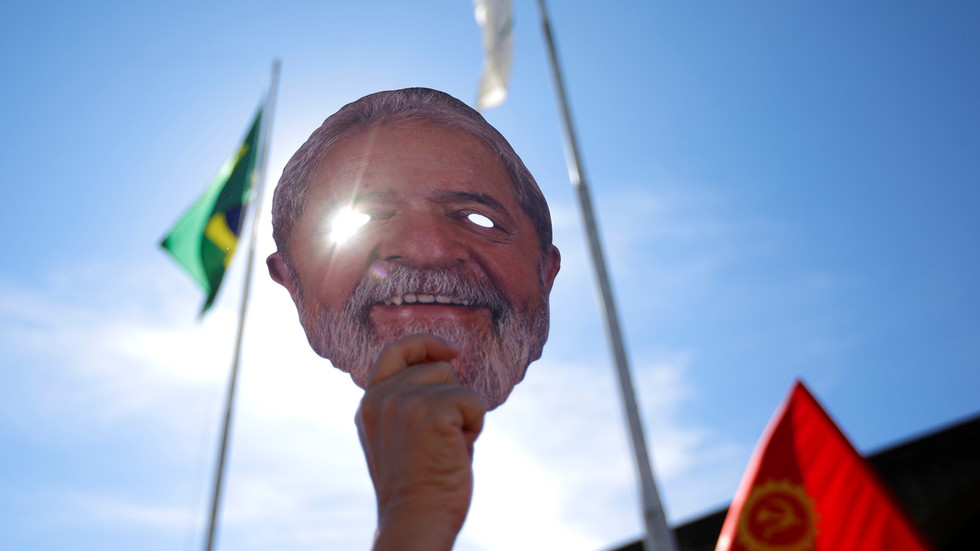 The Intercept has released documents showing that prosecutors, and even the presiding judge, in the case against former president Lula da Silva conspired to railroad him and his party’s chances in the presidential election.
The Intercept published three exposés, Sunday, showing political motivation by members of a taskforce of prosecutors in charge of, and even the judge presiding over, one of the biggest corruption scandals in Brazil’s history. Known as ‘Operation Car Wash’, the scandal has implicated scores of politicians in Brazil and the wider Latin American region from across the political spectrum.
An enormous trove of secret documents reveals that Brazil’s most powerful prosecutors, who have spent years insisting they are apolitical, instead plotted to prevent the Workers’ Party from winning the 2018 presidential election. https://t.co/IhgUHMfdoj
— The Intercept (@theintercept) June 10, 2019
The most high profile conviction so far has been Brazil’s popular former president Luiz Inácio Lula da Silva, widely known simply as “Lula.” Da Silva was elected president of the South American nation twice, in 2002 and 2006, by large margins and left office with approval ratings of over 80 percent. He was planning to run in the 2018 elections and was favorite to win before his campaign was railroaded by his court case and subsequent conviction in August of that year. With da Silva out of the race, a right-wing candidate Jair Bolsonaro, a former army captain and member of the Brazilian parliament, defeated the relatively unknown former Sao Paulo mayor, Fernando Haddad, who ran as the replacement candidate for da Silva’s Workers’ Party (PT in its Portuguese initials). PT is a center-left social democratic party with a large base of support amongst the country’s poor and working class.
According to the Intercept, the leaked communications are made up of “private chats, audio recordings, videos, photos, court proceedings, and other documentation.” The Intercept’s co-founding editor Glenn Greenwald, along with reporters Leandro Demori and Betsy Reed, say that they demonstrate beyond doubt the flagrant political motivation of the case’s prosecutors and the then-presiding judge Sergio Moro. According to the authors, the documents show “serious wrongdoing, unethical behavior, and systematic deceit about which the public, both in Brazil and internationally, has the right to know.”
Most damning for the Bolsonaro government is the inclusion of Moro in some of the leaks, who the president appointed to a powerful position within his cabinet following his election victory – dubbed “a super justice minister” in the Brazilian press. The appointment was widely seen as confirming suspicions that Moro was far from politically neutral. His actions during the trial, such as tapping phones and intimidating defense attorneys, has been dubbed “lawfare,” with one UK-based human rights lawyer likening his behavior to the Catholic Inquisition. Moro consistently denied the allegations, instead presenting himself as a public servant engaged in a noble campaign against corruption.
Just compare the denials of Justice Minister Moro in the above video - scoffing at the notion he ever conspired with prosecutors to construct the cases he then judged - with the chats we published showing he did exactly that over & over, to Lula & others: https://t.co/UdfuTzpTOs
— Glenn Greenwald (@ggreenwald) June 10, 2019
But according to the Intercept, several of the documents show direct collusion between Moro and lead prosecutor Deltan Dallagnol. For example, shortly after Dallagnol initiated the corruption case against da Silva, he privately messaged Moro to discuss how they would conspire to present him as the “maximum leader” of Operation Car Wash. Dallagnol was open about the lack of material evidence against da Silva throughout the discussions and stressed the need for the trial to take place in the Curitiba province where Moro has jurisdiction.
Also of particular interest is the contents of a group chat held between the prosecutors and Moro on the cell phone app Telegram. In the chat, they discuss how they wish to damage the PT’s chances in the 2018 Brazilian presidential elections even after da Silva had been disqualified. For example, they spoke about how to use a court mechanism to block a newspaper from interviewing him from within prison.
After publication, the prosecutors issued a press release in which they did not deny the veracity of the leaks, but rather alleged that they had been illegally obtained. A statement made by Sergio Moro also did not directly contradict the claims but rather accused the publication of “sensationalism” and taking the information “out of context.” The articles also precipitated some vicious back-and-forth attacks between Greenwald and President Bolsonaro's son Eduardo. Bolsonaro posted a tweet attacking Greenwald as a “voice for Snowden” and “dumping” US classified information through Wikileaks. Greenwald responded by pointing out that Bolsonaro was simply using irrelevant “little attacks to distract” from the matter at hand.
Esse "ex-CNN" de novo. rs. Quem usa Caio como um guru "cai" em completa ignorância e status de palhaço. Mas: observe como o @BolsonaroSP, como *todos os defensores de Moro*, usa pequenos ataques para distrair do que o ministro da Justiça de seu pai e Deltan disserem e fizeram: https://t.co/WAEbO7gS8X
— Glenn Greenwald (@ggreenwald) June 10, 2019
--- ---
...