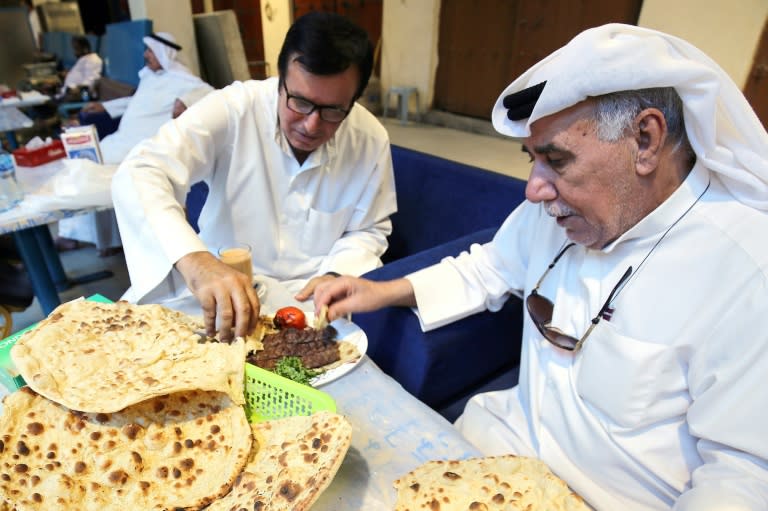 Salima Lebel
,AFP•July 16, 2019
Kuwait City (AFP) - Khalil Kamal makes sure he regularly visits Kuwait's popular Souq Al-Mubarakiya, where he enjoys his favourite kebab meal with onion, rocket and freshly baked Iranian bread.
Hassan Abdullah Zachriaa (R), a Kuwaiti of Iranian origin and owner of the Al-Walimah restaurant, shares Iranian bread - known as taftoon - during a meal with a friend. The bread has been a staple of Kuwaiti meals for decades

* * * The smell of the bread wafts through the market as it bakes in a traditional oven at the Al-Walimah restaurant in downtown Kuwait City.
The restaurant's Iranian baker takes one of the many dough balls lined up in front of him and spreads it over a cushion, using the pad to stick the dough against the inside wall of the clay oven.
Once ready, he uses a long stick to reach in and pull out a steaming rounded loaf, served piping hot to customers.
https://s.yimg.com/uu/api/res/1.2/i0w6gKZUmLcz950vaAFCdw--~B/aD01NjQ7dz03Njg7c209MTthcHBpZD15dGFjaHlvbg--/http://media.zenfs.com/en_us/News/afp.com/b05832b6175d0fcfdf1d0067bc9834d3dd9c1005.jpg
Bakeries specialising in Iranian bread began popping up in Kuwait in the 1970s and have since expanded to more than 100

* * * For decades, Iranian bread -- known as taftoon -- has been a staple of Kuwaiti breakfast, lunch and dinner tables.
For Kuwaitis, their bond with Iranian culture remains unchanged despite the growing regional tensions between the Sunni-ruled Gulf countries and the Shiite Islamic republic.
Iran sits just across the strategic Gulf waterway and its culinary influences are strong.
"Iranian bread is the only bread we've known since we were born," 60-year-old Kamal told AFP.
Hassan Abdullah Zachriaa, a Kuwaiti of Iranian origin, opened Al-Walimah in 1996. Its tables are spread across a courtyard, surrounded by wooden columns and entryways.
Zachriaa, in his 70s, said the restaurant puts out between 400 and 500 loaves of Iranian bread a day.
"The big turnout in Kuwait for Iranian bread stems from the fact that for decades, our mothers used to make it at home," he told AFP.
"We then started to buy it from bakeries and stand in lines to get it fresh and hot in the morning, noon and evening."
- 'Since childhood' -
The flat bread is offered alongside many dishes popular in Kuwait such as Al-Baja, lamb bits stuffed with rice, Al-Karaeen, cooked sheep feet, classic chickpea plates, or beans and cooked fish.
Almost all restaurants in the old market have their own traditional clay ovens where either Iranian or Afghan bakers work.
Derbas Hussein al-Zoabi, 81, a customer at Al-Walimah, said many Kuwaitis were raised on Iranian bread.
"Since childhood, Iranians baked bread for us... and we used to eat in the morning with milk and ghee" -- clarified butter.
Other than at street markets, Kuwaitis can buy Iranian bread from co-ops, where people line up in the early hours of the morning and again in the evening to get the freshly baked goods.
Some bakeries even have designated segregated entryways for men and women.
Some Kuwaitis customise their orders with spreads of sesame, thyme and dates, and many come prepared with cloth bags to keep the bread as fresh as possible on the trip home.
Bakeries specialising in Iranian bread began popping up in Kuwait in the 1970s and have since expanded to more than 100, according to deputy chief of the Union Co-operative Society Khaled al-Otaibi.
"These bakeries produce two million loaves of bread a day to meet the needs of Kuwaitis and residents," he told AFP.
"They receive fuel and flour at a subsidised price so that bread is available for not more than 20 fils (less than seven cents)."
The price however can go to up to 50 fils depending on the amount and type of additives, including sesame and fennel.
- 'Nothing to do with politics' -
Taftoon has remained popular in Kuwait despite escalating tensions in the past year between Iran on one side and the United States and regional powerhouse Saudi Arabia on the other.
"Bread has nothing to do with politics," said Zachriaa. "Iranians live here, and there will be no shortage of this bread that is very desired."
Shiite Iran maintains good relations with Kuwait, unlike its strained ties with other Gulf countries, including Saudi Arabia, Bahrain and the United Arab Emirates.
According to Jassem Abbas, a heritage specialist, regional politics do not have a major impact on the social lives of Kuwaitis.
"Despite the current tensions and what has happened in the (1980-1988) Iraq-Iran war, Iranian bread remains a top favourite," he told AFP.
Around 55,000 Iranians live in Kuwait, according to the Iranian embassy, while Shiites make up about one-third of Kuwait's 1.4 million native population.
"Politics does not ruin friendships between people," Abbas said.
---Khalil Kamal makes sure he regularly visits Kuwait's popular Souq Al-Mubarakiya, where he enjoys his favourite kebab meal with onion, rocket and freshly baked Iranian bread. The smell of the bread wafts through the market as it bakes in a traditional oven at the Al-Walimah restaurant in downtown ---
... 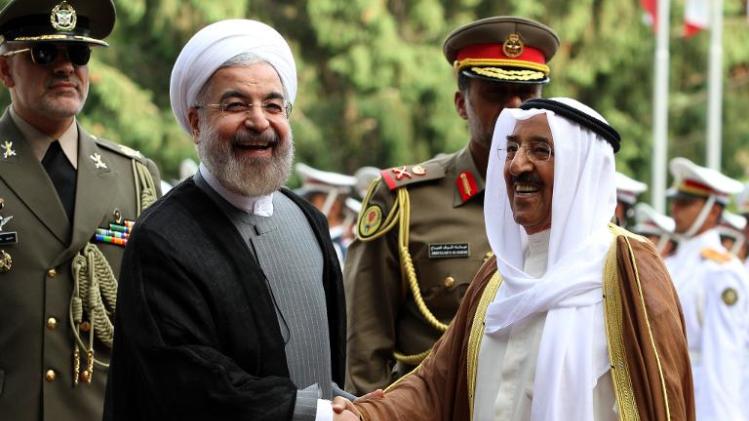