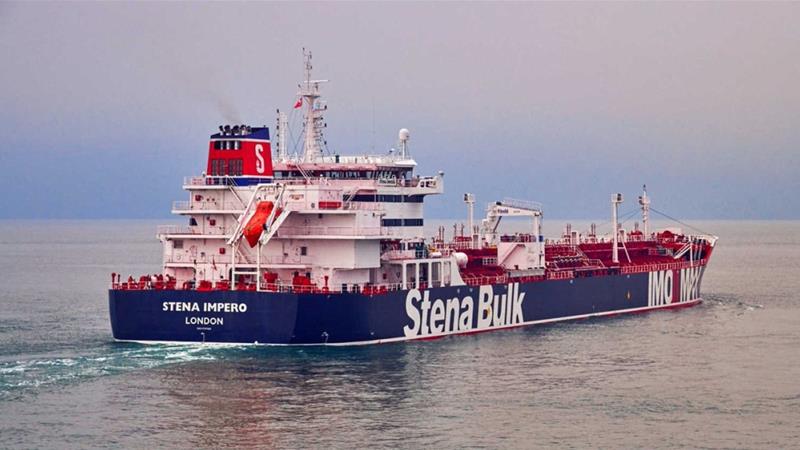 Iran's Revolutionary Guard Corps says tanker was captured 'for failing to respect international maritime rules'.
Iran's Revolutionary Guard Corps (IRGC) said its forces have captured a British oil tanker in the Strait of Hormuz for allegedly violating international laws, amid rising tensions in the Gulf.
The Stena Impero tanker "was confiscated by the Revolutionary Guards at the request of Hormozgan Ports and Maritime Organisation when passing through the Strait of Hormuz, for failing to respect international maritime rules," the IRGC's official website Sepahnews announced.
The tanker "was led to the shore and handed over to the organisation to go through the legal procedure and required investigations," it said.
The vessel was seized by "small crafts and a helicopter" at 7:30pm local time (15:00GMT), the owner of the vessel, Stena Bulk, and Northern Marine Management said, adding that they are "presently unable to contact the vessel".
Tanker tracking service Marine Traffic showed that the UK-flagged, Swedish-owned Stena Impero last signalled its location near the Island of Larak in the highly sensitive waterway at 9pm local time (16:30 GMT).
There are 23 crew members on board, the company's statement added.
"We are urgently seeking further information and assessing the situation following reports of an incident in the Gulf," a spokesperson for Britain's Ministry of Defence said.
Second vessel seized
The British Foreign Office confirmed a second naval vessel, a Liberian-flagged vessel, had been seized in the Strait of Hormuz by Iranian authorities.
Later on Friday, Iran's semi-official Fars news agency reported that the Liberian-flagged Mesdar tanker was briefly held and given a notice to comply with environmental regulations before being allowed to continue on its way.
"I'm extremely concerned by the seizure of two naval vessels by Iranian authorities in the Strait of Hormuz," said Foreign Secretary Jeremy Hunt.
"I will shortly attend a COBR (national security) meeting to review what we know and what we can do to swiftly secure the release of the two vessels.
"These seizures are unacceptable. It is essential that freedom of navigation is maintained and that all ships can move safely and freely in the region."
There was no immediate confirmation from Iran that its forces had seized a second vessel.
'Provocative moves'
The developments came a day after the IRGC said it had seized a foreign tanker accused of smuggling oil with a crew of 12 on Sunday.
The Strait of Hormuz in the Gulf, the world's most important waterways for the transport of oil, has become a hotspot for tensions with Iran amid a spate of incidents there.
Relations between Britain and Iran and the United States and Iran have soured in particular.
Earlier this month, British Royal Marines seized an Iranian oil tanker off the British overseas territory of Gibraltar for allegedly violating sanctions against Syria.
On Friday, Gibraltar's Supreme Court extended for 30 days the detention of the seized Iranian supertanker, Panama-flagged Grace 1, which was intercepted off the southern tip of Spain on July 4.
Richard Weitz, a security analyst at Wikistrat, a global risk consultancy group, said Friday's incident was a "reciprocal action" by Iran.
"This was anticipated," he told Al Jazeera from Washington, DC. "This is just the latest in a series of these subconventional forms of provocative moves."

presstv.com 22/07/2019 Politics
Russia says Iran's arguments for its recent seizure of a UK-flagged oil tanker in the Strait of Hormuz were more convincing than those of London. ***...View Details»