Good Pirate, Bad Pirate! UK caught in crossfire of US-Iran brinkmanship, and whose fault is that?

Tanker Wars again?! London has scored an own-goal by plunging right in the middle of the US game of nerves against Iran. The international crisis over detained tankers comes amid an awkward leadership transition at home.
Next week, Britain will have a new prime minister after Theresa May makes room for either former Foreign Secretary Boris Johnson or incumbent Foreign Secretary Jeremy Hunt. Whoever is elected next Tory leader and head of the government will get an international crisis in his lap. And it won’t be the Brexit mess that sealed the downfall of May’s premiership – there is a more acute problem with Iran.
In early July, the UK captured an oil tanker carrying Iranian crude through the Strait of Gibraltar, saying it was trying to violate EU sanctions by delivering its cargo to a Syrian port. This Friday, Tehran detained a British-flagged tanker off its coast in what is widely perceived as an act of retaliation. Iran accuses the UK of doing the US’ bidding as the administration of President Donald Trump ratchets up pressure on the Islamic Republic with deployment of military assets and threats of sanctions against buyers of its oil.
Both Johnson and Hunt said they would not support military action against Iran if Trump ordered one.
“The US is our closest ally, we talk to them the whole time, we consider any requests that they say carefully, but I cannot envisage any situation where they request or we agree to any moves to go to war,” Hunt assured MPs worried that the situation would escalate further.
Sure, the UK has a great record of resisting Washington’s requests to go to war in the Middle East. And it’s not like the architects of the 2003 Iraq invasion, like John Bolton, are back in power in Washington, leading the charge against Iran, right?
Excellent news: UK has detained the supertanker Grace I laden with Iranian oil bound for Syria in violation of EU sanctions. America & our allies will continue to prevent regimes in Tehran & Damascus from profiting off this illicit trade.
— John Bolton (@AmbJohnBolton) July 4, 2019
It may be tricky to declare your intentions for peace while pretending that all the culprits sit in Tehran, to the beat of war drums coming from Washington. What if newspapers learn that you have quietly asked your allies across the pond to please shut up… pardon, to “refrain from making inflammatory public statements”?
There is also the Labour opposition, ready to point out the UK’s embarrassing role in the stand-off with Iran.
“Our role is to speak up for conflict resolution, de-escalation,” said shadow Foreign Secretary Richard Burgon in an interview with Sky News. “What we don’t want to do is end up being just the messengers or sidekicks of Donald Trump and John Bolton.”
Washington’s hand in the seizure of the Iranian tanker was publicly confirmed by Spanish Foreign Minister Josep Borrell, who probably was not thrilled to see the Royal Marines in action in the territorial waters of Gibraltar, which Madrid refuses to see as British.
The US and Iran have been engaged in a brinkmanship confrontation since May, with the sabotage of oil tankers, takedowns of drones, and constant bickering over whose “malign actions” are a bigger threat to stability in the region. The Trump administration went on the war path against Iran last year after sending the 2015 nuclear deal with Iran down the drain, a key foreign policy achievement under Barack Obama. But it had a hard time convincing other signatories, including the UK, that it was a good idea.
Now London finds itself in the fray, despite all the Brexit chaos at home. The person on the British side who gave the order to raid the Iranian tanker may have given the hawks in Washington a nice present for Independence Day. Will it be good for Britain? It’s anyone’s guess.
https://www.rt.com/news/464670-panama-withdraws-flag-tanker / 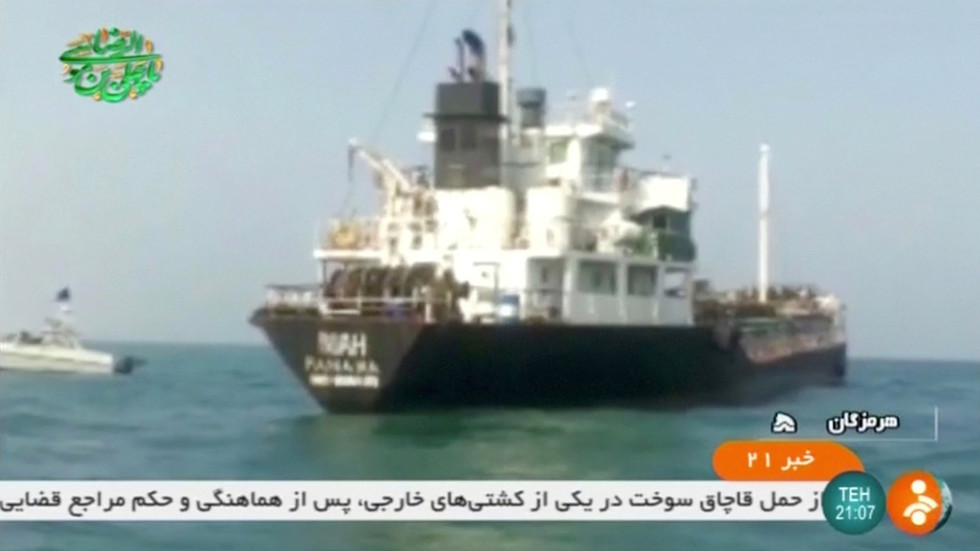 * * * The plot has thickened around the disappearance of the oil tanker MT Riah, towed to Iranian shores last week, with Panama saying it is revoking the ship’s registration over violation of international rules.
Panama's Maritime Authority on Saturday announced that it initiated the process of withdrawing its flag from the Emirati-based tanker Riah, which vanished south of Iran’s Larak Island.
In a statement cited by Reuters, the authority said that its own investigation into the tanker’s disappearance had found that it “deliberately violated international regulations” by failing to report an unusual situation, presumably its seizure by the Iranian Navy. The authority also condemned the use of Panama-registered vessels for “illicit activities” without ascribing any such specific activity to the Riah.
The tanker went missing from radar screens shortly before midnight last Saturday, when its tracking signal abruptly blinked out. On Tuesday, the Iranian news agency ISNA reported, citing the Iranian Ministry of Foreign Affairs, that the Iranian forces came to a foreign tanker’s rescue after it sent a distress signal. While the name of the tanker was not revealed at the time, the vessel was presumed to be the Riah.
However, two days later, Iran’s Islamic Revolutionary Guard Corps released footage showing the seizure of the ship with ‘Riah’ and “PANAMA” written on its hull, while accusing the vessel of smuggling fuel.
Semi-official news agency Fars reported at the time that the Iranian Navy had towed the tanker to the shore upon receiving a distress signal and discovered a haul of petroleum products, allegedly smuggled from Iran, after boarding the ship.
Despite airing the footage, Tehran has never acknowledged that the seized vessel was the Emirati-based Riah.
Other murky circumstances in the story have still not been clarified. While it has been widely reported that the Riah made frequent trips between different emirates of the UAE, that country has distanced itself from the ship.
"The tanker in question is neither UAE owned nor operated,” a UAE official told Emirates News Agency earlier this week.
There is also uncertainty over whether the ship asked for help, with the same official saying it “did not emit a distress call.”
At the moment, it’s still unclear who owns and operates the tanker. The Equasis maritime database shows the Riah’s last known owner as UAE-registered RIAH Shipping & Trading Inc., which appears to be based in Singapore.
As for the conflicting reports of her ownership:
According to Equasis, she is owned by RIAH SHIPPING & TRADING INC since Sept 11, 2018. Company seems to be based in Singapore according to Facebook page; however operates under care of PRIME TANKERS LLC of Dubai, UAE. #OOTTpic.twitter.com/WTUsTXjbFf
— TankerTrackers.com, Inc.⚓️...