US offered millions in cash to captain of Iranian tanker

US offered millions in cash to captain of Iranian tanker...
aljazeera.com 05/09/2019 News 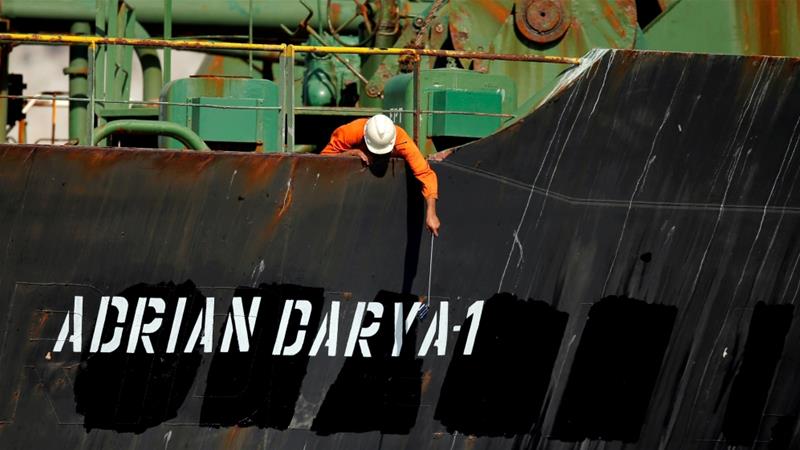 Gibraltar released the ship after receiving assurances the vessel would not head to countries sanctioned by the EU.
A senior United States official personally offered several million dollars to the Indian captain of an Iranian oil tanker suspected of heading to Syria, the State Department has confirmed.
The Financial Times newspaper reported that Brian Hook, the State Department point man on Iran, sent emails to captain Akhilesh Kumar in which he offered "good news" of millions in US cash to live comfortably if he steered the Adrian Darya 1 to a country where it could be seized.
"We have seen the Financial Times article and can confirm that the details are accurate," a State Department spokeswoman said on Wednesday.
"We have conducted extensive outreach to several ship captains as well as shipping companies warning them of the consequences of providing support to a foreign terrorist organization," she said, referring to Iran's elite Revolutionary Guards.
The Adrian Darya 1 was held for six weeks by the British overseas territory of Gibraltar on suspicion that it was set to deliver oil from Iran to its main Arab ally Syria - a violation of European Union sanctions on President Bashar al-Assad's government.
Gibraltar released the ship, formerly called the Grace 1, on August 18 despite US protests after receiving written assurances that the vessel would not head to countries sanctioned by the EU.
Iranian Foreign Minister Mohammad Javad Zarif mocked Hook's initiative as he pointed to the FT story.
"Having failed at piracy, the US resorts to outright blackmail - deliver us Iran's oil and receive several million dollars or be sanctioned yourself," Zarif tweeted on Wednesday.
State Department chief spokeswoman Morgan Ortagus hit back using Zarif's exact words, accusing Iran of "outright blackmail" with its call for $15bn from European powers to be paid back from Iran's future oil sales.
A senior Iranian official has said that if Iran receives the credit line it would come back into full compliance with a 2015 nuclear accord from which US President Donald Trump withdrew.
No reply from captain
US authorities said that Kumar, 43, took over as captain in Gibraltar. After he apparently did not respond to the US offer, the Treasury Department on Friday imposed sanctions both on the ship and on Kumar himself, freezing any assets he may have in the US and criminalising any US financial transactions with him.
"Any US or foreign persons that engage in certain transactions with designated persons or entities may themselves be exposed to sanctions," the first State Department spokeswoman said.
Since sailing off from Gibraltar, the Adrian Darya 1 has reportedly been moving in the eastern Mediterranean near Lebanon.
The US also announced on Wednesday that it was imposing sanctions on a shipping network alleged to be tied to the Revolutionary Guards - and offering up to $15m for information that could disrupt the unit's finances.
The shipping network sold more than $500m this spring, mostly in Syria, according to the Treasury Department.
After withdrawing from the nuclear accord, the US has unilaterally threatened sanctions aimed at ending all oil sales by Iran in a bid to diminish Tehran's regional influence.
--- Maritime Piracy , Allied Pirates , Good Pirate , Bad Pirate ---...