Khomeini Returns to Iran with a French Connection 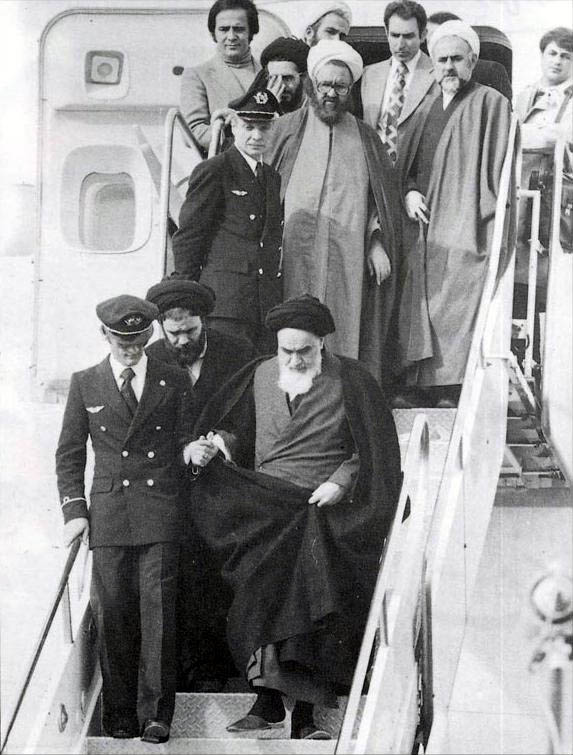 On Feb, 1. 1979 Ayatollah Ruhollah Khomeini returned to Iran from exile. 120 (or 140) international reporters accompanied him on the chartered Air France Boeing 747 flight from Paris -- "The Mayflower," one Israeli scholar called it. As many of us watched, and as recounted here by Elaine Sciolino, when the jet entered Iranian airspace, Peter Jennings, then a correspondent for ABC News, "asked the obvious question, and Sadegh Ghotbzadeh dutifully did the translating":
"Ayatollah, would you be so kind as to tell us how you feel about being back in Iran?"
"Hichi," the ayatollah replied. "Nothing."
"Hichi?" Ghotbzadeh asked him. Even he seemed incredulous at the response.
"Hich ehsasi nadaram," the ayatollah said for emphasis. "I don't feel a thing."
On 1 February Khomeini flew to Iran in a chartered Air France plane as flight 4721. He was accompanied by supporters as well as 120 international journalists. The presence of journalists was in part to ensure the safety of the plane from being attacked.
Khomeini's last words on French soil were of thanks to his host country for its hospitality. Asked a few days before what France would do if the Ayatollah failed and had to go back into exile, a high French minister replied: “Well, perhaps the burden of hospitality should be shared more equally the next time.”
The French Connection: The identity of the co-pilot helping Khomeini descend the stairs is unknown. Jorjan Fabian Yataoush seems to be a fake identity.
--- ---
...