Russia, China, Iran, Syria and Cuba Support Each Other in Fight Against U.S. Sanctions

Russia, China, Iran, Syria and Cuba Support Each Other in Fight Against U.S. Sanctions...
newsweek.com 07/09/2019 Economy

By Tom O'Connor On 9/6/19 at 1:30 PM EDT
Russia, China, Iran, Syria and Cuba are among the nations that have come out against the United States' use of sanctions to enforce its foreign policy around the world and these powers have sought ways to support each other in their common struggle.
Cuban Foreign Minister Bruno Rodríguez called President Donald Trump's administration out Thursday on Twitter, arguing that "#US sanctions against Iran´s maritime entities are another violation of International Law" in response to the State Department's announcement of further restrictions against the Islamic Republic's efforts to ship oil. He said that these "coercive measures preventing the movement of Iranian oil affect the brother peoples of #Iran and #Syria and threaten #Peace in that [volatile] region."
The following day, his Iranian counterpart Mohammad Javad Zarif, retweeted the message, writing Friday that "#US #EconomicTerrorism against Cuba, China, Russia, Syria, Iran &... deliberately target civilians, trying to achieve illegitimate political objectives through intimidation of innocent people." He added: "US [rogue] behavior now includes piracy, bribery & blackmail. We salute Cuba & stand w/it."
While Washington's use of sanctions for political purposes far predates Trump's time in the White House, the Republican leader has expanded the practice — and a number of these targets are fighting back.
People arrive to attend the Damascus International Fair in the Syrian capital, August 30. Washington warned any participant could be subject to sanctions due to its blacklisting of the Syrian government, but a number of countries including Belarus, China, Cuba, Indonesia, Iran, Iraq, North Korea, North Macedonia, Oman, Pakistan, the Philippines, Russia, the United Arab Emirates and Venezuela. MAHER AL MOUNES/AFP/Getty Images

* * * A day before U.S. special representative on Iran Brian Hook announced new restrictions on Tehran and a $15 million reward for those seeking to disrupt the maritime network of the country's elite Revolutionary Guards, trade magazine Petroleum Economist cited a senior source as saying that China had agreed to invest some $280 billion in Iran's oil and gas industry.
The U.S. and China are already locked in a multibillion-dollar trade war and the Trump administration has blacklisted major telecommunications firm Huawei. Asked Wednesday on the alleged deal with Iran, Chinese Foreign Ministry spokesperson said he was "not aware" of the information, but maintained that "China and Iran enjoy friendly relations and our two countries conduct friendly and mutually beneficial cooperation in various fields within the framework of international law."
Russia and China joined the U.S., the European Union, France, Germany and the United Kingdom in forging a nuclear deal with Iran in 2015, lifting international sanctions in exchange for Tehran agreeing to curb its nuclear activities. Last year, Trump unilaterally abandoned the accord due to Iran's alleged funding of militant groups abroad and its development of missile technology.
The deal's other signatories have continued to support it, however, though European powers have largely failed to come through on promises of normalized trade ties due to U.S. sanctions. Russia and China, however, have kept up business with Iran as the pair pursued their own joint agenda and one official from the former has proposed an arrangement that could see Tehran restore some of its lost oil trade.
Iran's seaborne traffic suffered a blow in July when the U.K. seized one of its supertankers after accusing Iran of trying to transport oil through the Strait of Gibraltar to Syria, whose government — backed by Moscow and Tehran — has been accused of war crimes throughout a civil war against rebels and jihadis. In a show of support, Russia-administered Crimea Prime Minister Georgy Muradov said last month that he could allow Iranian ships access to the Mediterranean via the Volga-Don canal and the Black Sea.
"Mutual interest in cooperation between Iran and Crimea is growing, especially considering the anti-Iranian policy of the U.S., sanctions introduced against this country and related consequence," Muradov told the state-run Tass Russian News Agency at the time.
Crimea was annexed by Russia from Ukraine in 2014 after an internationally-disrupted referendum that took place in the wake of a political uprising in Kiev. Viewing the move as illegal, the U.S. laid out sanctions against both Russia and the regional government in Crimea. Under Trump, the U.S. has expanded sanctions against Moscow. 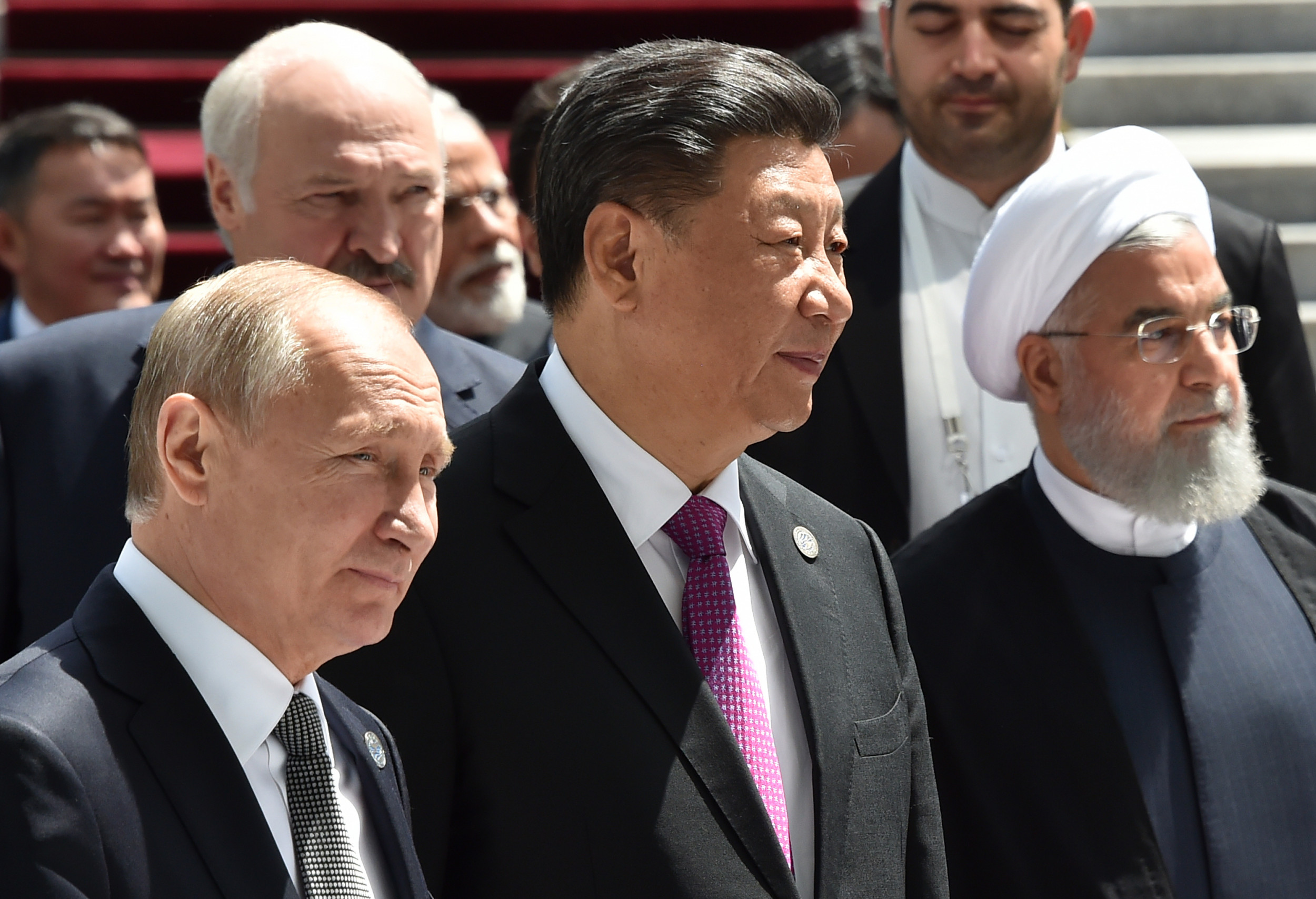 * * * Trump has also sought to reverse the previous administration's efforts to ease restrictions against Cuba, which has been the target of a nearly-six decade embargo since a communist revolution overthrew a U.S.-backed administration there. Cuban Deputy Prime Minister Ricardo Cabrisas received Damascus' ambassador to Havana Idris Mia on Friday, "reiterating his country's support for Syria in its war on terrorism and stressing the need to strengthen relations between the two countries in all fields, especially economic ones."
Friday also saw the conclusion of the 61st Damascus International Fair, an event of which the U.S. warned it may sanction any participant. Despite this threat, among those that attended included Belarus, China, Cuba, Indonesia, Iran, Iraq, North Korea, North Macedonia, Oman, Pakistan, the Philippines, Russia, the United Arab Emirates and Venezuela, the latest target of the Trump administration's so-called "maximum pressure" campaign.
Though the U.S. and many of its allies cut ties with Venezuelan President Nicolás Maduro earlier this year to back opposition-controlled National Assembly head Juan Guaidó's declaration of leadership, dozens of nations such as Russia, China, Iran, Syria and Cuba have continued to back the socialist leader. Supporters have seen Guaidó's bid for power as a campaign for democracy amid accusations of government corruption and mismanagement and by opponents as an extension of U.S. imperialism in Latin America.
Also supportive of Maduro and suspicious of U.S. intervention was North Korea, which, despite pursuing peace with the Trump administration over the past year and a half, still remained subject to perhaps the most potent "maximum pressure" approach of all. In the past two days, top North Korean officials have met with Chinese Foreign Minister Wang Yi and Russian Deputy Foreign Minister Yuri Trutnev to shore up ties.
--- ---
...