"Death to America" billboards pop up in Baghdad. It's a message from Iran. 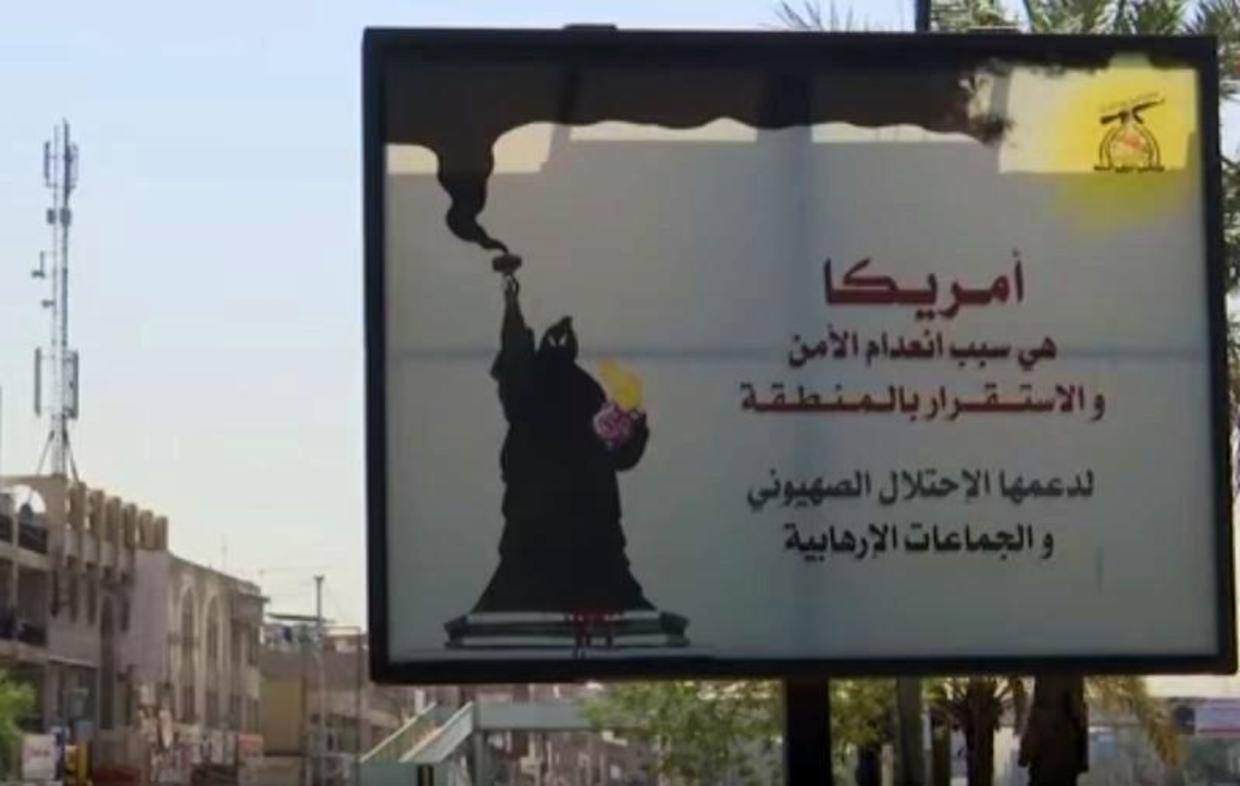 By Tucker Reals, Omar Omar, Khaled Wassef
September 11, 2019 / 10:56 AM / CBS News
Billboards with the slogans "Death to America — Death to Israel" have appeared in the Iraqi capital of Baghdad in recent days. There are at least five of the large signs in central Baghdad, some less than a mile from the U.S. Embassy, the Iraqi presidential palace and the national government's headquarters.
The signs appear to be part of a campaign by Iran, carried out through proxy groups that directly threaten U.S. troops in Iraq, to demonstrate its strength and reach in the region as tension between Washington and Tehran threatens to explode into conflict.
"The billboards erected in the streets of Baghdad are evidence of the government's inability to control pro-Iranian groups who want to drag Iraq into an international conflict that endangers the country's future on behalf of Iran," Atheel al-Nujaifi, the governor of Iraq's Nineveh province, said last week.
Iraqi political analyst and former presidential adviser Hiwa Osman told CBS News the signs show how firm a foothold Iran has in Iraq. "There isn't a difference between Iran and its militias inside Iraq," Osman said.
He said hard-line Iranian factions in the country are undoubtedly behind the billboards, "sending the message that should conflict arise (between Iran and the U.S.), they are on the Iranian side."
"America doesn't scare anyone" in Iraq, but "Iran does," said Osman, who was an adviser to the Iraqi president from 2005 to 2008. "If you speak against America nothing happens. If you speak against Iran, you are likely to get killed."
The message from Iran has also been conveyed through attacks targeting Israel, blamed on another Iranian proxy group, Hezbollah, and Iran's actions in the Persian Gulf.
A billboard in Baghdad bearing a disparaging likeness of the Statue of Liberty and Donald Trump, and text reading, "The U.S. is responsible for the region's insecurity and instability because it supports the Zionist occupation and terrorist groups," is seen in central Baghdad, Sept. 6, 2019. AP

* * * One of the Baghdad billboards includes a violent depiction of the Statue of Liberty and President Donald Trump. The accompanying text reads: "The U.S. is responsible for the region's insecurity and instability," for supporting Israel.
The U.S. Embassy in Baghdad and Iraqi government officials declined to comment on the billboards to CBS News.
Iraq is caught between two allies
Iraq is a vital U.S. ally in the Middle East. American forces worked directly with their Iraqi counterparts to drive ISIS out of the country. Some 5,000 U.S. service members are still there, helping train the Iraqi military, keep ISIS remnants at bay and maintain the tenuous security in the country.
The American forces also help protect U.S. interests in Iraq and, unofficially, serve as a very deliberate reminder of U.S. power to Iraq's northern neighbor, Iran.
But even with U.S. support, the government in Baghdad still depends on local militias — many of them backed directly by Iran — to maintain security.
The Shiite, Iranian-backed "Popular Mobilization Units" (PMU) became key Iraqi allies early in the fight against ISIS and still hold significant sway in many parts of the country, including parts of Baghdad.
Iraq needs to work with both Iran and the United States. But with tension between those two Iraqi allies as high as it's been in decades, many Iraqis fear their country could get caught in the middle of a war between Tehran and Washington.
Iraqi President Barham Salih told CBS News' Roxana Saberi in May that he was "very worried" by the prospect.
"Iraq has been living through hell for the last four decades," he said. "Enough of wars, enough of conflict, and certainly, Iraqis do not want to see this country yet again turn into a zone of proxy conflict."
Persistent "rogue elements"
For almost a decade before they simultaneously battled ISIS, the Iranian-backed militias were some of the most lethal forces attacking American troops in Iraq. They haven't gone anywhere, and Iran wants it known they would pose the same threat in any new conflict.
At the end of August, a senior PMU leader made it clear that all Americans in Iraq would become targets in the event of a U.S. war with Iran.
"All those Americans will be taken hostage by the resistance," said Abu Alal al-Walaei, Secretary General of Kataib Sayed al-Shuhadaa, one of the biggest PMU militias in Iraq. The interviewer was startled by the assertion.
"I will say it again," al-Walaei said. "All Americans will be hostages of the resistance if a war breaks out, because we will stand by the Islamic Republic (of Iran)." He said he wasn't speaking in his capacity as a PMU leader, but merely as leader of an individual "resistance faction."
The problem is well recognized, both in Iraq and Washington. 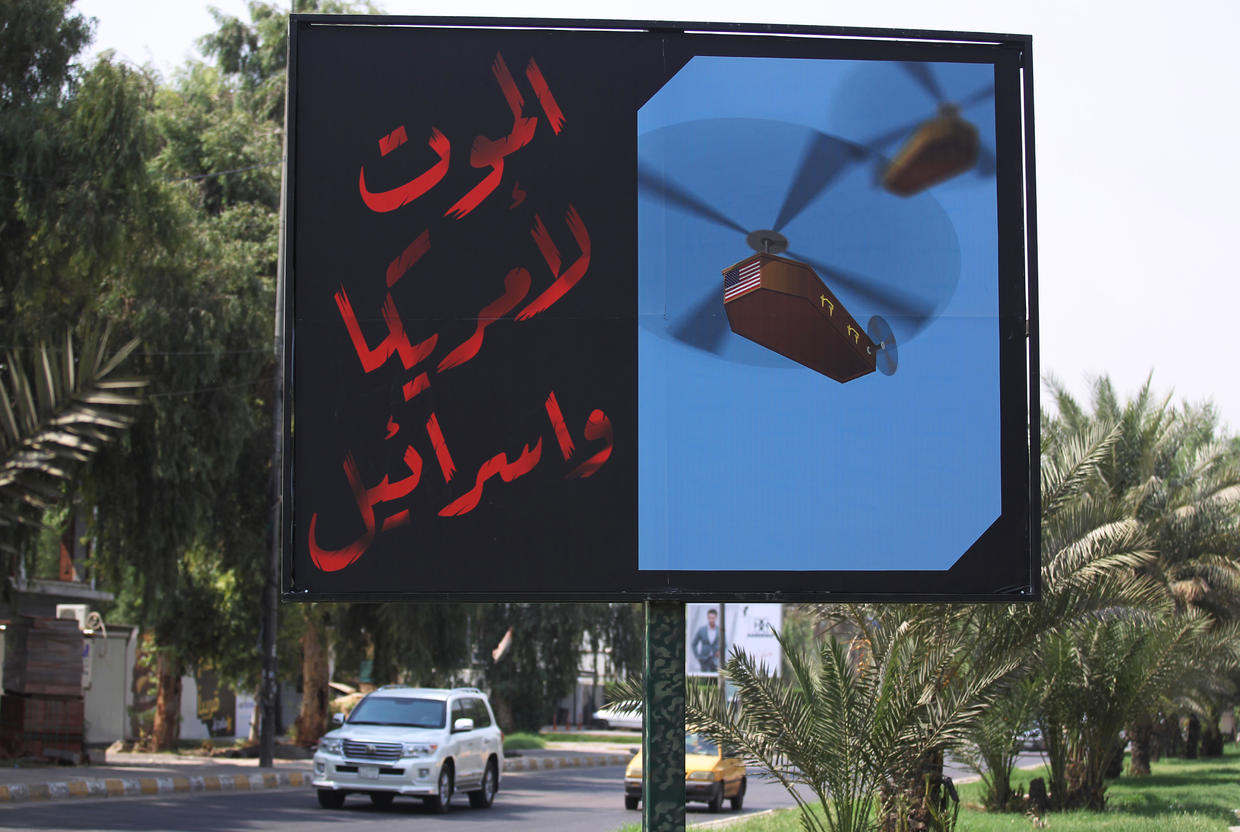 A billboard installed by a militant faction of Iraq's Popular Mobilization Units on a main road in Baghdad bears the slogan: "Death to America and Israel," next to a picture of a helicopter carrying a coffin draped with the U.S. flag, August 30, 2019. Getty

* * * Even President Salih conceded to CBS News in the spring that there were "rogue elements" that "may not be totally accountable to the state." He said he and other Iraqi leaders were pressing those Iranian-backed Shiite militia to "cool it."
At the end of August, Ambassador Jonathan Cohen, then the United States' acting permanent representative to the United Nations, told members of the Security Council that "Iran's sponsorship of destabilizing armed groups in Iraq operating outside of government control undermines Iraq's sovereignty and threatens the safety of civilians."
Cohen called for "these destabilizing armed groups to be removed from civilian centers and replaced with professional security forces that are responsive to Baghdad and responsible for enforcing the rule of law."
The Iraqi government is trying to do that, by convincing the militias — of which Osman believes there are about 12 — to join the national defense forces and take commands from Baghdad, rather than Tehran.
A deal was reached for them to do so by the end of July, but a PMU leader informed Iraq's government that he would need another two months to get all the militias to commit to the plan. Osman said at least four or five of the groups are considered hardline Iranian factions, and they are putting up the resistance (and likely the billboards).
Support for the rogues
It's difficult to gauge how much affinity the Iraqi public has for Iran's proxy groups. The inter-Islam divide between Sunni and Shiite still looms large in Iraqi society. There is still bitter resentment in the predominantly Shiite country over the brutality of Saddam Hussein's Sunni regime, which ruled over the majority by force.
Some Iraqis are suspicious of American motives. One resident of the capital, 27-year-old Ali Hassan, told CBS News he believed the U.S. was "operating in Iraq on behalf of the Israelis."
Shopkeeper Mohamad al-Rekabi shared that view, which echoes the narrative offered by Tehran: "America and Israel have chosen to start a war with us, and we are ready for it."
But that sentiment is not ubiquitous. Iran and Iraq fought an eight-year war only 30 years ago, and for many Iraqis the fear of what Tehran can do in a conflict far outweighs any loyalty to the regime there.
"Iran is our neighbor, on our border. America is thousands of miles away," Osman said. "When push comes to shove, the Iraqis don't want to piss off the Iranians. They know the extent of damage the Iranians can inflict."
Baghdad resident Haj Mhessen lost one of his two sons, both members of Iraq's national security forces, in the fight against ISIS. He worried the billboards reflect a push toward a new war, and he hoped the Iraqi government would avoid being dragged into it.
"Why do America and Iran want to pull Iraq into this war?" he asked rhetorically. "I will tell you why, because none of them is ready to endanger their country and people. They want to use us, the Iraqis, to do the dirty fight for them."
First published on September 11, 2019 / 10:56 AM
--- ---
...