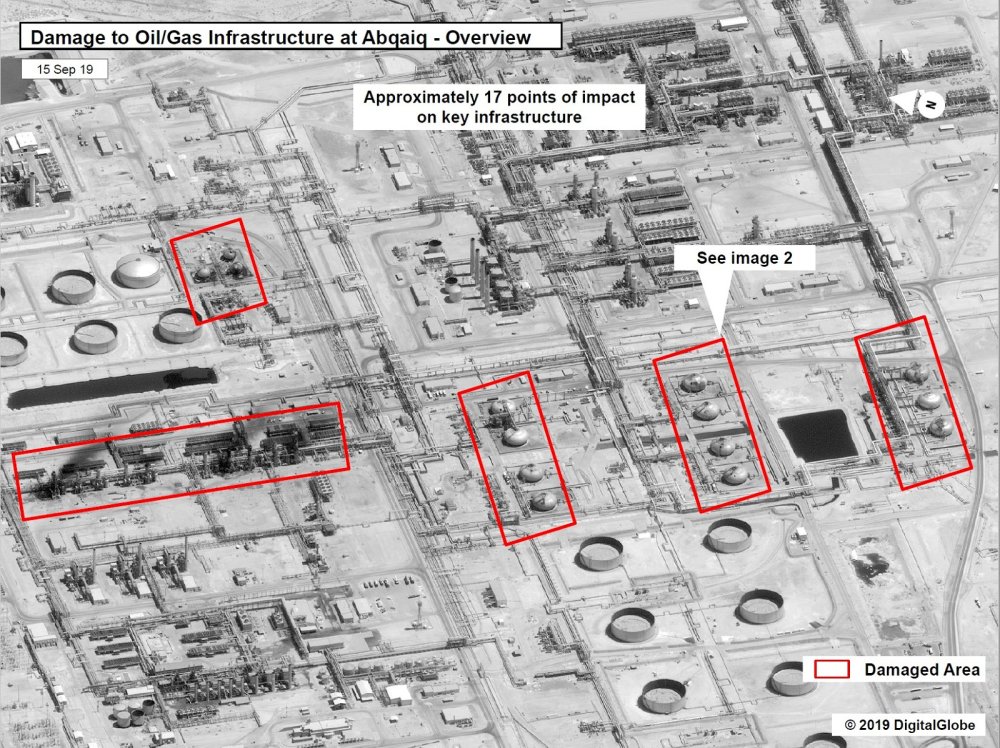 One thing is clear: The attack revealed the limits of Saudi Arabia’s seemingly sophisticated air-defense system. Riyadh in recent years has spent billions of dollars building up six battalions of U.S.-made Patriot surface-to-air missiles and associated radars. The Patriots didn’t stop the recent attack.
by David Axe Follow @daxe on Twitter L
The missile strikes that badly damaged a key Saudi oil facility on Sept. 14, 2019 largely remain a mystery to the public.
Yemen's Houthi rebels, who have been at war with a Saudi-Emirati coalition since 2015, claimed responsibility for the coordinated attacks on two Saudi Aramco facilities, but it’s unclear that the Houthis alone possess the capacity for long-range, precision-guided strikes.
It’s possible the attacks involved far-flying drones firing small, guided munitions. The Aramco sites are around 800 miles from the Saudi Arabia-Yemen border. Iran’s hard-line Revolutionary Guard Corps in the past has supplied the Houthis with weaponry including drones and components for ballistic missiles.
But one thing is clear. The attack revealed the limits of Saudi Arabia’s seemingly sophisticated air-defense system. Riyadh in recent years has spent billions of dollars building up six battalions of U.S.-made Patriot surface-to-air missiles and associated radars. The Patriots didn’t stop the recent attack.
And it wasn’t the first time Saudi Arabia’s Patriots have failed. At least five Patriots apparently missed, malfunctioned or otherwise failed when Saudi forces tried to intercept a barrage of rockets targeting Riyadh on March 25, 2018.
Houthi forces fired at least seven rockets at Saudi Arabia that night. The Saudi military launched Patriot Advanced Capability-2 missiles in an attempt to destroy the Houthi rockets in mid-air. The Saudis claimed seven of the Patriots struck their targets.
One man reportedly died after being struck by metal fragments. It's unclear whether the fragments came from a malfunctioning Patriot, a successful intercept or a Houthi rockets striking the ground.
But amateur videos that appeared online in the aftermath of the missile skirmish indicate that many of the Patriots exploded in mid-air or veered off course. The errant missiles invoked memories of similar failures involving American-operated Patriots during the 1991 Gulf War and the 2003 invasion of Iraq.
"It's nothing but an unbroken trail of disasters with this weapon system," said Theodore Postol, an MIT physicist and prominent critic of U.S. missile defenses.
Riyadh seems to realize it needs better missile defenses. “Saudi Arabia has been in talks to acquire the same S-400 advanced air-defense system that Turkey recently bought from Russia,” Marc Champion wrote for Bloomberg.
The Russian weapon, though little tested in combat, has technical advantages over U.S. Patriots. It has a range of 400 kilometers (250 miles), versus the Patriot's 160 kilometers, can destroy targets moving twice as fast and can be mounted for action in five minutes, compared with an hour for a Patriot battery.
Russia pairs its S-400s with the smaller Pantsir-S1 system, to handle low flying and short range missiles that would slip past the larger ballistic missile defense system. Though Russia has deployed S-400s in northwestern Syria, it has used the Pantsir system to counter drone strikes.
"Ideally, the Saudis need layered defenses, including short-range point defense systems like the German Skyshield or Russian Pantsir to allow rapid engagements of small threats with cheaper systems than the massively expensive Patriot," Justin Bronk, research fellow for air power and technology at the U.K.'s Royal United Services Institute, told Champion.
But all kinds of traditional air-defenses could struggle to keep up with small, inexpensive drones firing even smaller, cheaper precision munitions.
“Here's a cold hard reality that most people just don't understand, including many defense-sector pundits—air defense systems, no matter how advanced and deeply integrated, aren't magic,” Tyler Rogoway wrote at The War Zone. “They have major limitations, especially considering most primarily rely on ground-based sensors.”
We live in an age where everyone has access to high-resolution satellite imagery of nearly any point on the globe. This is something that was unthinkable even following the end of the Cold War. A single individual now has the capabilities that entire government intelligence agencies were built to produce, all on their smartphone or laptop computer. And it's entirely free!
GPS is even more of a revolutionary capability. It's incredible pinpoint accuracy really has become more concerning since the hobby drone industry exploded and now components to control drones via GPS are somewhat off-the-shelf in nature and are supplied from manufacturers around the globe. With these two things combined, a bad actor has both the targeting intelligence and the precision targeting capabilities available for a minuscule fraction of what they cost in the past and without any major barriers of entry.
These types of strikes don't have to originate beyond a border, they can even originate from anywhere, including right here in the U.S. against U.S. targets. We must change our way of thinking when it comes to precision munitions and drones, and especially the imaginary line that still seems to separate them. In addition, confronting this issue just won't be about fielding near and very costly military gear, it will also be about implementing, regulations, working with the global community and a lot of intelligence gathering. The best and cheapest way to stop any attack is to do so before they start.
David Axe serves as Defense Editor of the National Interest. He is the author of the graphic novels War Fix, War Is Boring and Machete Squad.
--- ---
... 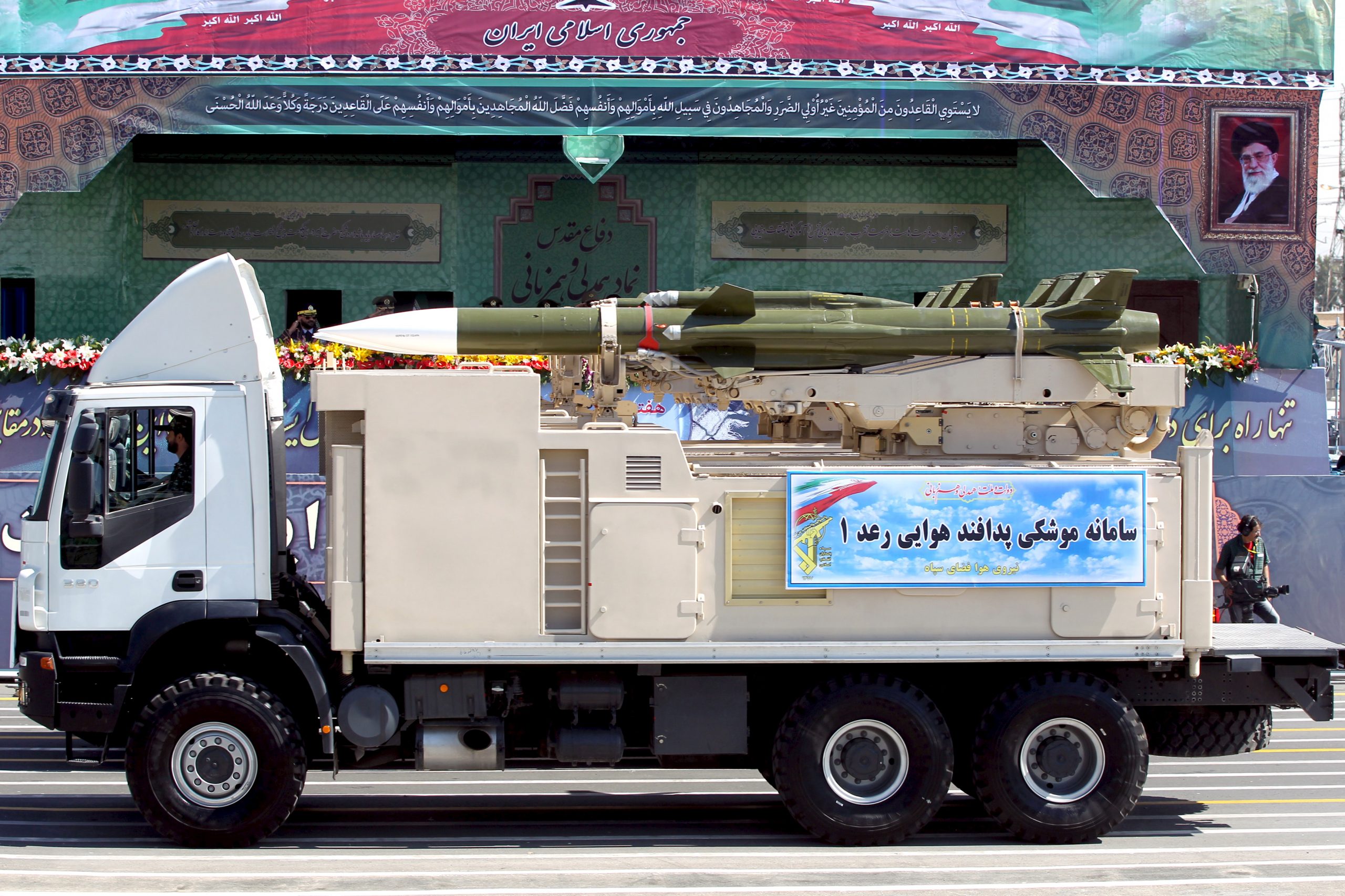