Greta Thunberg to UN Climate Summit: 'How dare you?'

World leaders gather for one-day event to discuss measures to try to reverse global warming and cope with its effects.
by Ben Piven
United Nations, New York City - With all eyes on the United Nations this week, world leaders gathered on Monday at the UN Climate Action Summit to push forward on plans to reverse global warming and cope with its most catastrophic effects.
Swedish teen activist Greta Thunberg and two other young people joined UN Secretary-General Antonio Guterres as he urged diplomats to offer up concrete commitments, solutions and action - not just speeches.
"My message is that we will be watching you. This is all wrong," Thunberg said, giving an emotional speech that appeared to move the audience at the UN General Assembly hall in New York City.
"I shouldn’t be up here. I should be back in school on the other side of the ocean," she added.
"You have come to us young people for hope. How dare you? You have stolen my childhood with empty words. Yet, I'm one of the lucky ones.
"People are suffering, people are dying. All you can talk about is money and fairy tales of eternal economic growth. For more than 30 years, the science has been crystal clear."
Youth Climate activist Greta Thunberg speaks during the UN Climate Action Summit [Timothy A Clary/AFP]
Pressure from climate activists and environmental activists ratcheted up on Friday, with a day of global student strikes bringing together some four million people who demanded that fossil fuels be curtailed.
'This is a race we are losing'
About 75 countries are enhancing their Nationally Determined Contributions (NDCs) under the Paris Climate Agreement, and country coalitions representing nine issue tracks are reporting the progress made on specific climate areas such as mitigation and adaptation.
"This is a race we are losing, but that we can win," Guterres said in his opening remarks on Monday. "But we have the tools, and technology is on our side."
"The biggest cost is doing nothing, and subsidising a dying fossil-fuel industry," he told the summit.
"Nature is angry and we fool ourselves if we think we can fool nature because nature always strikes back," he added. "And around the world nature is striking back with fury. June through August was the hottest summer in the Northern Hemisphere."
Guterres also noted that the last five years were the "hottest on the books, ever" as drastically worsening conditions were beginning to "jeopardise life itself".
Revised plans
A long list of announcements was expected to be released throughout the day-long event, with countries pushing ahead with programmes to reduce greenhouse gas emissions further during the decade to 2030 and towards carbon neutrality in 2050.
New plans by global leaders were said to represent about 37 percent of current world emissions, but 14 high-emitting countries - accounting for 26 percent of emissions - were not expected to revise their carbon-reduction pledges. They included the United States, Japan and Australia.
Activists hoisted an inflatable blimp of Japanese Prime Minister Shinzo Abe standing on a bucket of coal to highlight the dozens of new coal power plants being built in Japan.
Sixty countries had speaking slots for Monday, just over half the number that applied. Guterres reportedly refused to allow countries to present if they were not seen as making significant enough strides with plans. 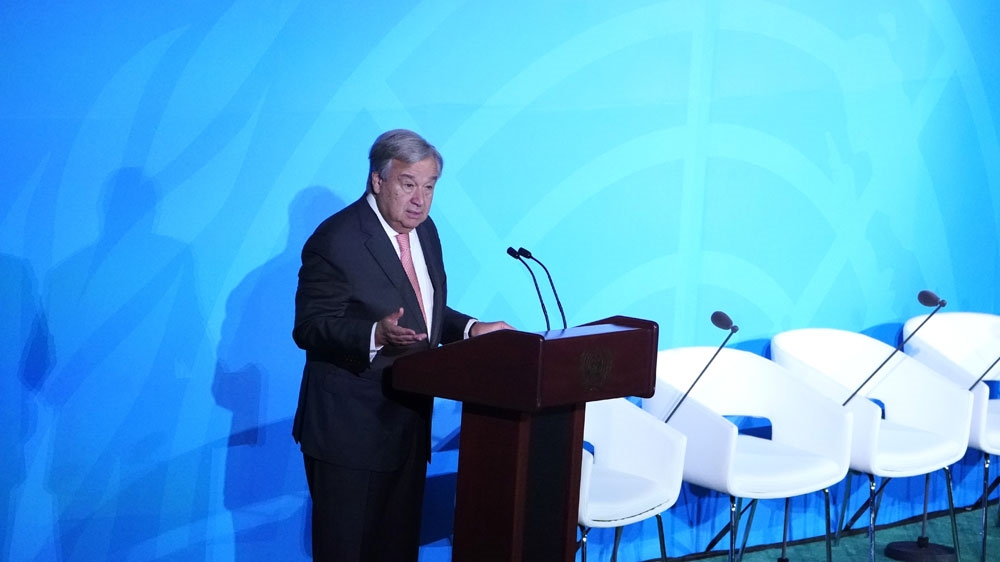 * * * Countries such as France, Germany, India, China and Russia were expected to speak about their commitments, with Indian Prime Minister Narendra Modi and German Chancellor Angela Merkel addressing the summit on Monday morning.
Merkel promised to eliminate coal energy by 2038 and pledged new money for climate innovation, in addition to the implementation of a carbon-pricing scheme in the European Union.
British PM Boris Johnson was to speak at the end of the day, prior to concluding words by Guterres.
Denmark and Sweden will be releasing details on climate finance plans through the Green Climate Fund.
'Building the solutions'
Anurag Roy, a young entrepreneur who won a competition at Saturday’s Youth Climate Summit, was on stage with Thunberg and Guterres at Monday's opening session.
"We, the youth, are caught in the middle. But fortunately, the youth are also building the solutions," said Roy.
"My team and I worked on building a platform that allows farmers in remote areas of Africa to access high-quality weather updates," said Roy of his winning project.
"Because climate change has put them in a position where agriculture is completely affected," Roy said his product will help them to "build climate-resilient systems that don't rely solely on government policy". 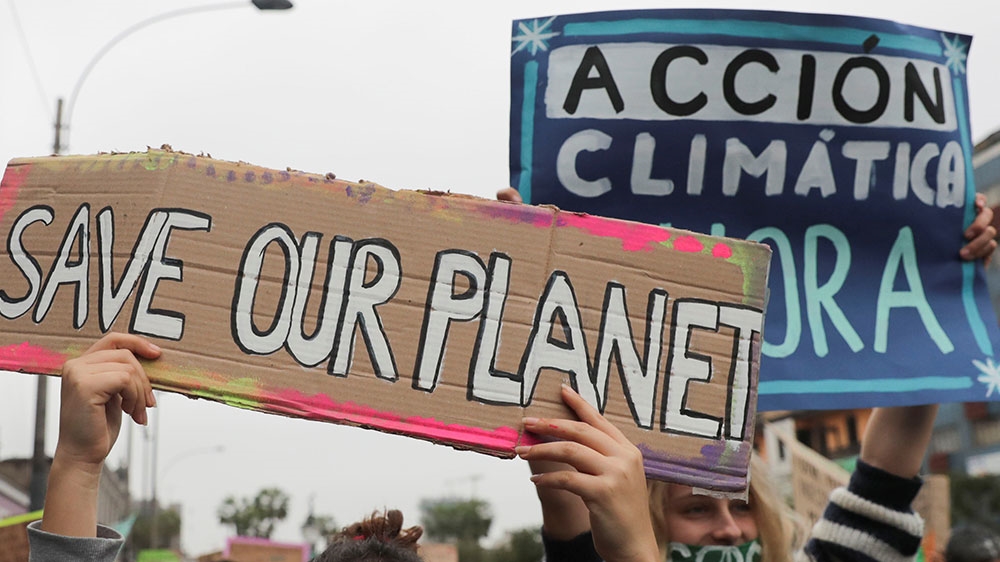 * * * Bank of England Governor Mark Carney is to spearhead an announcement on Monday committing to resilience efforts.
Around 80 companies with a collective value of two trillion dollars are expected to release plans for lowering emissions to keep global warming to under a 1.5-degree Celsius temperature increase (2.7 degrees Fahrenheit).
A group of major oil and gas companies, including ExxonMobil, BP, Royal Dutch Shell and Chevron organised their own event down the street from the UN on Monday. But activists said their work on carbon capture was little more than "greenwashing" a lack of commitment towards emissions reductions.
And another set of companies is announcing a plan to create zero-emissions shipping routes by 2030 as part of a "Getting to Zero" programme.
Denmark and Ethiopia are presenting their work with a Cooling Coalition to deliver cheap and clean air-conditioning to the Global South.
A Climate Action for Jobs initiative is being led by Spain and Peru to promote green economy investments.
Meanwhile, St Lucia and Barbados are unveiling a new debt-swap-for-adaptation investment proposal with the Alliance of Small Island States.
US President Donald Trump was not expected to speak at the Climate Action Summit on Monday, but he appeared to be sitting with his country's delegation at the event prior to an appearance at a religious freedom event later in the day.
Trump will be speaking second during general debate on Tuesday, just after Brazilian President Jair Bolsonaro, who is expected to address the Amazon deforestation crisis.
SOURCE: Al Jazeera News