Trump moves to bar senior Iranian officials and their family from U.S. 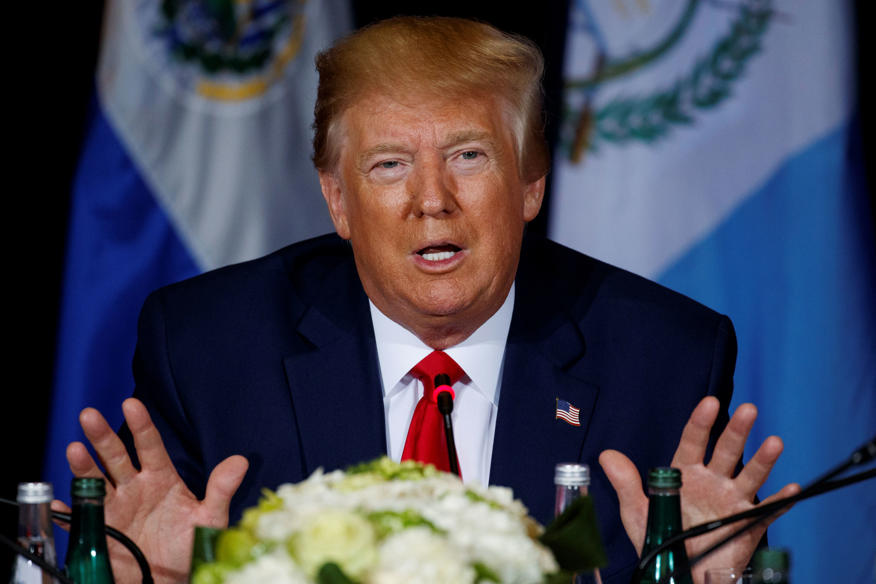 By Arshad Mohammed
UNITED NATIONS (Reuters) - President Donald Trump on Wednesday took steps to bar senior Iranian officials and their immediate family from entering the United States as immigrants or non-immigrants, the White House said in a proclamation.
The proclamation repeated U.S. accusations that Iran sponsors terrorism, arbitrarily detains American citizens, threatens its neighbors and carries out cyber attacks.
“Given that this behavior threatens peace and stability in the Middle East and beyond, I have determined that it is in the interest of the United States to take action to restrict and suspend the entry into the United States, as immigrants or non-immigrants, of senior government officials of Iran, and their immediate family members,” Trump said in the proclamation.
The U.S.-Iranian confrontation has ratcheted up since last year, when Trump withdrew from Iran’s 2015 nuclear deal with major powers and reimposed sanctions that have crippled the Iranian economy. Trump wants to go beyond that deal to further curb Iran’s nuclear program, halt its ballistic missile work and end its support for proxy forces in the Middle East.
Iranian President Hassan Rouhani earlier said the United States would have to “pay more” if it wanted a wider deal and rejected meeting with the U.S. president for now. Both men were in New York for the annual United Nations General Assembly gathering of world leaders.
Trump has pursued a policy of “maximum pressure” against Iran to try to force Tehran to change its policies, and a senior U.S. official said it would continue to “increase pressure on the Iranian regime... until it abandons its outlaw behavior.”
“For years, the Iranian regime has attacked, criticized, and aggressively worked against the United States,” said the official. “Meanwhile, hypocritical regime leaders and their family members have been exploiting our freedom and prosperity.
“They come to America to go to our schools, seek jobs, enjoy our entertainment, and take in our culture,” said the official, who spoke on condition of anonymity, adding such “officials and their families don’t deserve the privilege and luxury of coming to the United States.”
Trump gave the authority to decide who would be covered by the proclamation to the secretary of state.
He also provided exceptions, saying that among others the proclamation would not apply to lawful U.S. permanent residents, those granted asylum, or refugees already admitted to the United States. He also provided possible exceptions for people whose entry “would further important ... law enforcement objectives.”
It was not clear if the proclamation would affect Iranian diplomats at the United Nations.
Under the 1947 U.N. “headquarters agreement”, the United States is generally required to allow access to the United Nations for foreign diplomats. But Washington says it can deny visas for “security, terrorism, and foreign policy” reasons.
--- ---
...