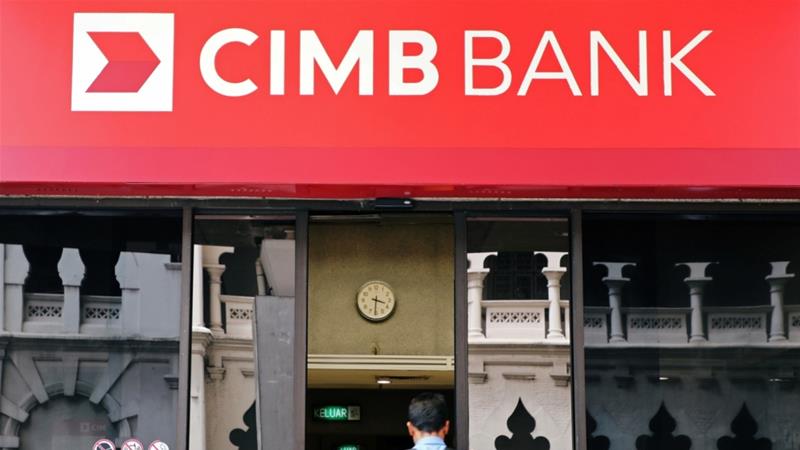 Some say that US sanctions on Iran in July are a factor in the 'mass closures' of Iranian accounts in Malaysian banks.
CIMB is one of the Malaysian banks that has served notices to Iranian citizens regarding the closure of their accounts [File: Lim Huey Teng/Reuters]

* * * Banks in Malaysia are closing the accounts of Iranian individuals and companies, nearly a dozen affected people told Reuters, in a sign that sanctions by the United States on Iran are having a far-reaching effect on citizens of the Islamic republic.
Although Malaysian banks seemed to be more cautious in dealing with Iranians than those elsewhere, some Iranians and one embassy official said, there were "mass closures" in the Southeast Asian country in recent months.
The banks were being "more Catholic than the Pope", said university lecturer Behrang Samadi, who is among an estimated 10,000 Iranians living in Malaysia and learned in August that his bank, CIMB, would close his 14-year-old account.
"In Western countries, there is no problem opening bank accounts," he added. "They are only sensitive about money transfers, especially in big amounts."
Samadi said he withdrew his money soon after the bank warned him of the closure within a month's time, though he was still able to access his account online on Sunday.
Despite Washington's sanctions over Iran's nuclear programme imposed late last year, Malaysia has kept up good diplomatic ties with Tehran, and last week, their leaders discussed ways to further strengthen ties.
It was not clear if the account closures were linked to the tracking of a tanker of Iranian fuel oil this year, a development that annoyed the US.
The US State Department did not immediately respond to a request for comment. A spokesman for Malaysia's prime minister did not respond to Reuters' questions.
Many Iranians said they knew of dozens of compatriots who had received notices from CIMB and RHB Bank.
"We regret to inform (you) that we are unable to continue the banking relationship," CIMB said in identical notices reviewed by Reuters.
The banks did not state a reason, but some individuals said bank officials attributed the move to tighter scrutiny after the sanctions.
CIMB and RHB declined to comment. Malaysia's central bank directed queries to the Association of Banks in Malaysia, which declined to comment.
Such matters depended on individual banks' own risk appetite and assessment, the central bank said this month in an email response to one Iranian's complaint that was viewed by Reuters.
But a July notification on the central bank's website refers to a statement by the Financial Action Task Force urging "enhanced due diligence" on Iranians by members of the global money laundering watchdog.
Iran's embassy in Kuala Lumpur said it was working to resolve the issue.
"We hope that by goodwill and cooperation of the Malaysian officials, the negotiations will yield a positive result," it told Reuters in an email last week, adding that Iranian companies had also been affected.
For now, Iranians in the Malaysian capital have been left wondering how to pay school fees or hospital bills.
"Without a bank account we need to use the ancient techniques, keeping money under the pillow or in teapots," said one of them, who sought anonymity. "It's not fair."
SOURCE: Reuters news agency