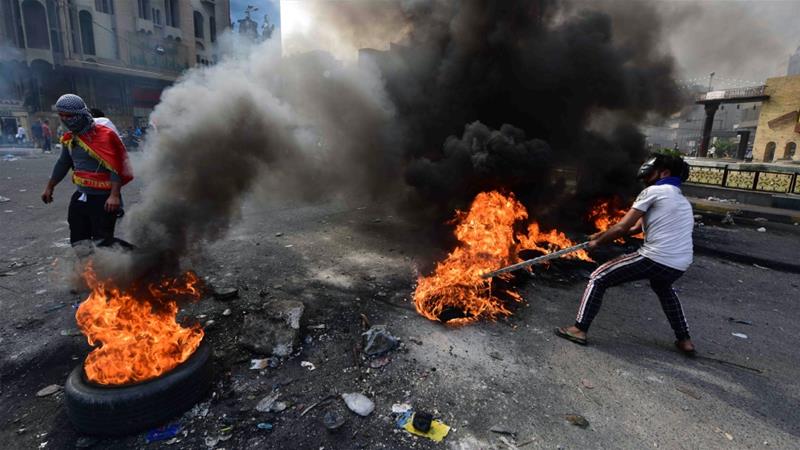 Protesters scale barriers ringing the consulate, bringing down an Iranian flag and replacing it with Iraqi flag.
Dozens of protesters in Iraq attacked the Iranian consulate in the Shia holy city of Karbala on Sunday night, scaling the concrete barriers surrounding the building, bringing down an Iranian flag and replacing it with the Iraqi flag, witnesses said.
Security forces fired in the air to disperse the protesters who threw stones and burned tires around the building on a street corner in Karbala south of Baghdad.
There were no immediate reports of casualties in the incident, which comes amid ongoing protests in the capital Baghdad and majority-Shia provinces in the south.
The witnesses spoke to The Associated Press on condition of anonymity because of security concerns.
There have been reports of the government authorities deploying police in the area.
The protests are directed at a post-war political system and a class of elite leaders that Iraqis accuse of pillaging the country's wealth while the country grows poorer.
But protesters have also directed their rage at neighbouring Iran and the powerful Iraqi Shia militias tied to it.
The anti-government protests in Karbala, Baghdad and cities across southern Iraq have often turned violent, with security forces opening fire and protesters torching government buildings and headquarters of Iran-backed militias.
More than 250 people have been killed in the security crackdown following the protests.
In an interview with Al Jazeera, Feisal Istrabadi, a former Iraqi ambassador to the UN and director of the Center for the Study of the Middle East at Indiana University, warned that more crackdowns could happen.
"I am very much afraid that is what's coming next," he said, adding that "we don't have a way of knowing what's going to happen after that."
Istrabadi said that is is "nearly impossible" for the current leaders in Iraq to quell the ongoing protests.
Sweeping reforms
The protests have grown and demonstrators are now calling for sweeping changes, not just the government's resignation.
The Iranian consulate in the holy shrine city of Karbala. These scenes will be cause for deep concern in Tehran. pic.twitter.com/IqoTzCFAMV
— Ranj Alaaldin (@RanjAlaaldin) November 3, 2019
Tens of thousands of protesters have gathered in Baghdad's central Tahrir Square and across southern Iraq in recent days, calling for the overhaul of the political system established after the 2003 US-led invasion.
Protesters have also taken over a large tower in the square that was abandoned after it was damaged in the war.
Thousands of students have skipped classes to take part in the street rallies, blaming the political elite for widespread corruption, high unemployment and poor public services.
Iraq's prime minister on Sunday called on anti-government protesters to reopen roads saying "it's time for life to return to normal," after a month of significant rallies demanding wide-ranging political change.
In a statement, Prime Minister Adel Abdul-Mahdi called for markets, factories, schools and universities to reopen after days of protests in the capital and across the mostly Shia south.
He said the threat to oil facilities and the closure of roads had cost the country "billions" of dollars and contributed to price increases that affect everyone.
Doctor abducted
Earlier on Sunday, protesters blocked roads around their main protest site with burning tires and barbed wire, unfurling a banner at one roadblock reading: "Roads closed by order of the people." 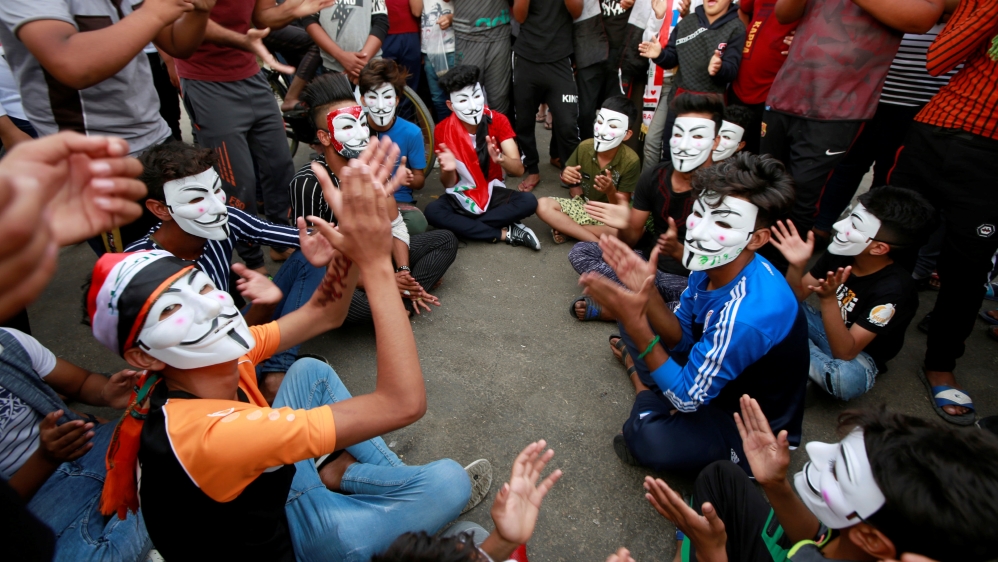 * * * They appeared to be borrowing a tactic from Lebanon, where similar anti-government demonstrations have been under way since October 17, and have repeatedly blocked major roads in order to ramp up pressure on authorities.
Security forces have fired tear gas, rubber bullets and live ammunition at the protesters, killing at least 256 people in two waves of demonstrations since early October.
Since the protests restarted on October 25 after a brief hiatus, there have been near-continuous clashes on two bridges leading to the heavily fortified Green Zone, the headquarters of the government and home to several foreign embassies.
In his statement, Abdul-Mahdi differentiated between peaceful protesters, who he said had turned the demonstrations into "popular festivals" that bring the nation together, and "outlaws" who he said had used the demonstrators as "human shields" while attacking security forces. The prime minister had met with top security officials late on Saturday.
The Iraqi High Commission for Human Rights meanwhile said Siba al-Mahdawi, an activist and physician who has taken part in the protests, was abducted on Saturday night by an unknown group.
The semi-official body called on the government and the security forces to reveal her whereabouts. Al-Mahdawi was one of several doctors who have volunteered to provide medical aid to the protesters.
Last week, President Barham Salih said Abdul-Mahdi was willing to resign once political leaders agreed on a replacement. He also called for a new election law and said he would approve early elections once it was enacted.
In a meeting with the heads of trade unions on Sunday, Salih said the new election law would be submitted to parliament this week.
SOURCE: Al Jazeera and news agencies

More than a dozen killed in Karbala as Iraqi forces open fire ... 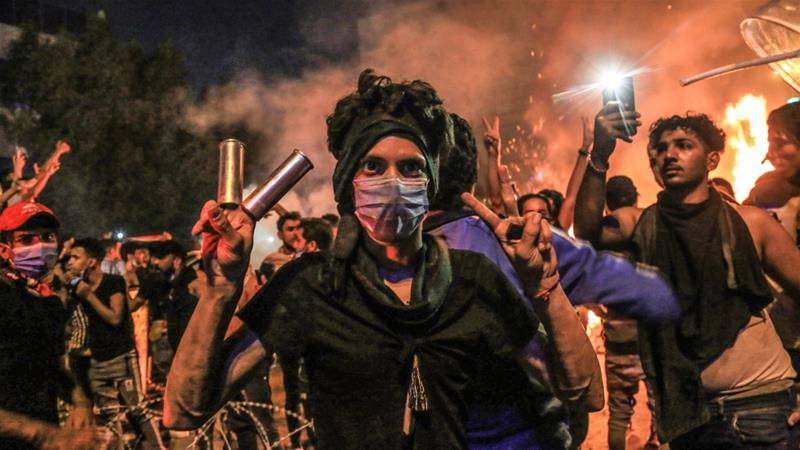 aljazeera.com 29/10/2019 Military
But officials in the holy city deny any demonstration-related deaths and say most of the wounded are security forces. Iraq's security forces fired liv...View Details»

'Clerics get lost!': Iran protests rage on over plane disaster...

msn.com 13/01/2020 Military
Crowds in Iran call on leadership to quit after Tehran admitted it mistakenly shot down plane with 176 people on board. Protesters denouncing Iran's c...View Details»

Are the US and Iran heading for a confrontation on Iraqi soil? ... 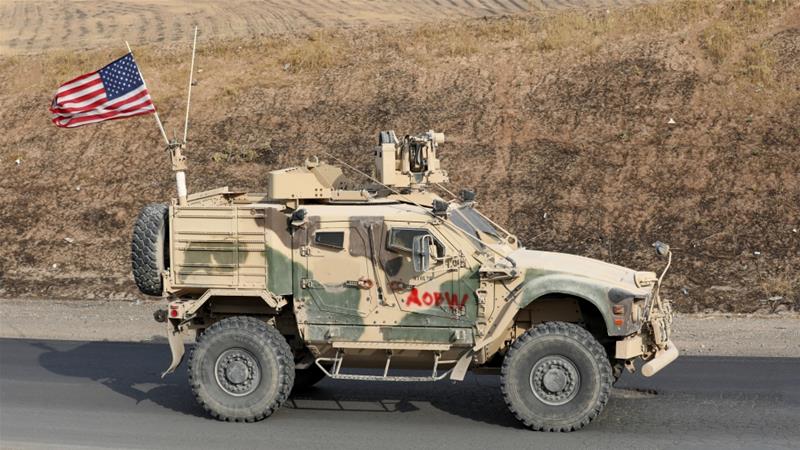 aljazeera.com 31/12/2019 Military
Analysts say US air attacks against Iran-backed militia in Iraq and Syria could become flashpoint for conflict. by Ali Younes The deadly US raids in I...View Details»