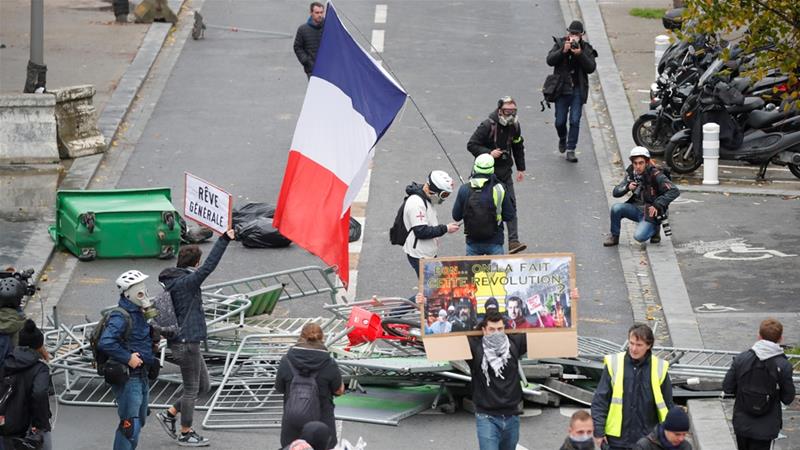 About 200 demonstrations planned across France as authorities expect thousands to rally in the capital.
Police have fired tear gas in northwestern Paris to drive back protesters on the first year anniversary weekend of anti-government "yellow vest" demonstrations.
Clashes broke out between demonstrators and police near the Porte de Champerret on Saturday as protesters were preparing to march across town towards Gare d'Austerlitz in southern Paris, while police also intervened to prevent a few hundred demonstrators from occupying the Paris ring road.
Paris police said 24 people were arrested by 09:50 GMT.
About 200 demonstrations were planned around France and authorities expect thousands to rally in the capital.
Some protesters in the French capital wore the high-visibility vests drivers are required to carry in their cars that gave the movement its name. Other demonstrators wore all black, their faces protected with gas masks.
Dozens of police in riot gear guarded the Arc de Triomphe overlooking the Champs-Elysees avenue, a scene of weekly rioting and police crackdowns at the height of the protests last year.
Corentin Pihel, 28, said he travelled to Paris from Montpellier to mark the movement's anniversary this weekend.
He joined the yellow vest movement two weeks after the movement began, identifying with its mission as a struggling student at the time.
"In the beginning, I found that the movement made a lot of sense, to mobilise from the bottom for better buying power," Pihel told The Associated Press news agency.
"But after, it enlarged its communication to become much greater - it's just people who want to live. And I felt a real solidarity."
The Yellow Vest protests erupted in mid-November 2018 originally over fuel price hikes and the high cost of living but spiraled into a broader movement against President Emmanuel Macron and his drive for economic reforms.
Protests have lost strength in recent months, going from tens of thousands of participants to just a few thousand, but its leaders have called to re-mobilise this Saturday, to celebrate the first anniversary. At its peak in late 2018, the movement grew to up to 300,000 people.
Reporting from Paris, Al Jazeera's Neave Barker said it is "difficult to know where this movement is going," but that it was clear that the number of protesters had fallen.
"So what's the reason for the dwindling? To some extent, it has achieved one of its key aims getting the tax on diesel revoked, and [Macron] also coughed up $11m in financial support to low income earners," Barker explained.
"The movement attracted a whole range of people from the far right, from the far left, and pretty much everyone in between, and because of that somewhat confused political identity, the [movement ] failed to [transform into] ... a political movement," he added.