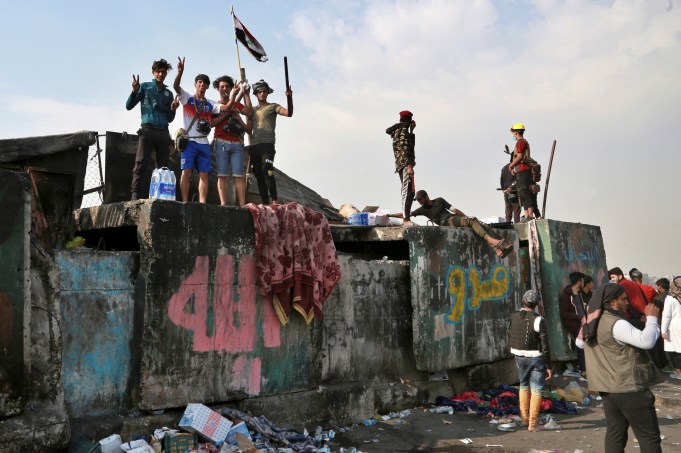 
By SAMYA KULLAB and MURTADA FARAJ / AP November 27, 2019
(BAGHDAD) — Anti-government protesters burned down an Iranian consulate building in southern Iraq on Wednesday, while six protesters were killed by security forces who fired live rounds amid ongoing violence in the country, Iraqi officials said Wednesday.
Protesters torched the consulate in the holy city of Najaf in the evening. One protester was killed and at least 35 people were wounded when police fired live ammunition to prevent them from entering the building, a police official said.
The demonstrators removed the Iranian flag from the building and replaced it with an Iraqi one. Iranian staff were not harmed and escaped the building from the back door and authorities imposed a curfew in Najaf. The official spoke on condition of anonymity in line with regulations.
The incident marked an escalation in the demonstrations that have raged in Baghdad and across the mostly Shiite southern Iraq since Oct. 1. The protesters accuse the Shiite-led government of being hopelessly corrupt and complain of poor public services and high unemployment. They are also decrying growing Iranian influence in Iraqi state affairs.
--- ---
...