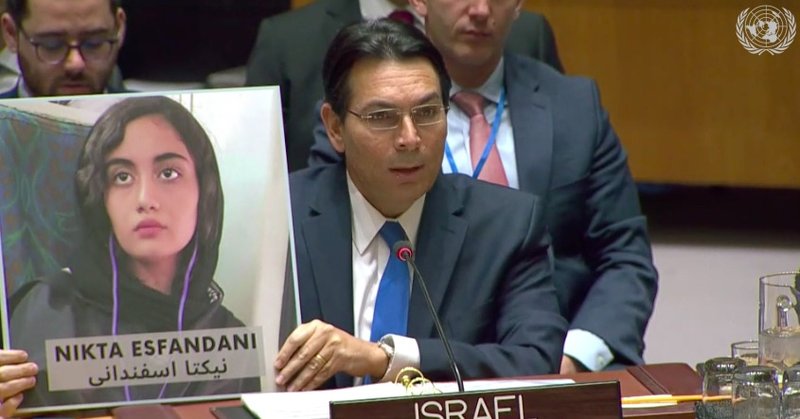 The UN Security Council convened Tuesday for talks on the tumultuous situation in the Middle East, after the leaders of Britain, France and Germany launched a process last week charging Iran with failing to observe the terms of the 2015 nuclear deal.
In a surprise move, Israel’s Permanent Representative to the UN Danny Danon began speaking in Farsi, saying “Israel stands beside the Iranian people.”
He presented to the members of the Council the picture of 14-year-old Nikta Esfandani who was killed by Iranian security forces during protests in November.
“After the brutal murder, the regime tried to cover up the death of Nikta,” Danon said. “At first it claimed she died of other circumstances and then forced her parents to say she died of poisoning.”
The Israeli ambassador added that “our Persian neighbors have a rich heritage that they should be proud of. The Persian people led the declaration of human rights, aided terminating slavery and granted people the right to choose their religion.
“The water systems, algebra, animation, chess -- all Iranian inventions,” Danon continued.
“It is unbelievable how big the gap is between [Iran’s] spectacular history to the current regime. It is absurd that the people that invented human rights and acted for freedom of religion is being ruled by a regime that is crushing those two rights,” he concluded.
On Monday, Iran said it will consider withdrawing from the Treaty on the Non-Proliferation of Nuclear Weapons (NPT) if a dispute over its atomic program goes before the UN Security Council.
--- ---
...