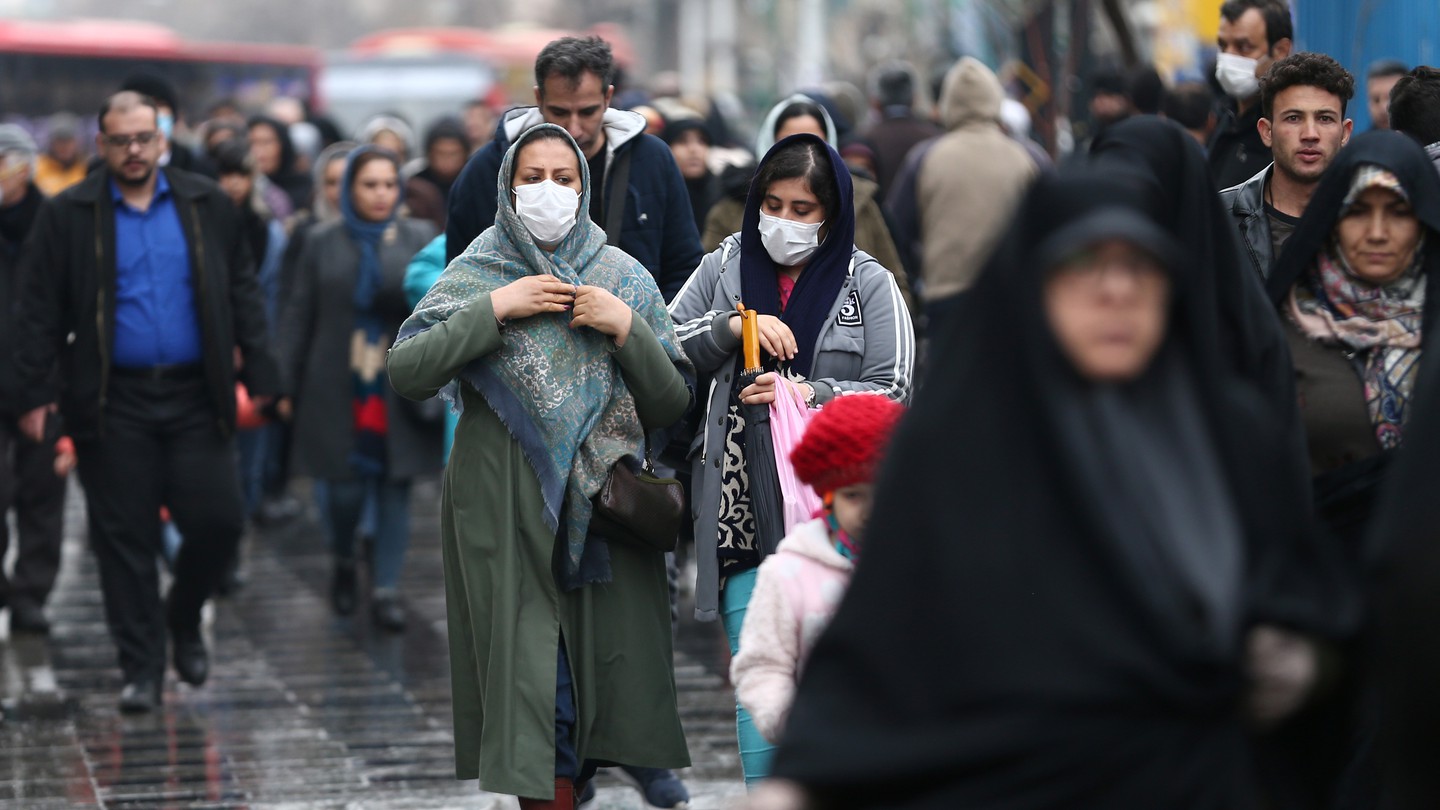 The government has refused to impose quarantines and is encouraging people to visit the city of Qom, the center of the outbreak.
10:35 AM ET
Graeme Wood Staff writer at The Atlantic
Picture the following sacred but unhygienic scene: Pilgrims from a dozen countries converge on one small city. They stay in cramped hotels, using communal toilets and eating meals together. For their main ritual, they converge on the tomb of a woman, the sister of a holy man, and as they get closer, they feel with rising intensity grief over her death and the deaths of her kin. The grief is a commandment: Each tear, according to one tradition, will be transformed in the afterlife into a pearl, and an angel will compensate them for their tears with a bucket of pearls that will be signs of their devotion when they arrive at the gate of paradise. But for now the bodily fluids are flowing, wiped away occasionally by bare hands, and the crowd is getting denser. A metal cage surrounds the tomb itself, and when the weeping pilgrims reach it, they interlace their fingers with its bars, and many press their face against it, fogging up the shiny metal with their breath. Some linger for minutes, some for seconds. In a single day, many thousands pass through the same cramped space—breathing the same air, touching the same surfaces, trading new and exotic diseases.
The city is Qom, Iran, and two days ago, a local health official declared on Iranian television that the coronavirus was burning through the community. The situation, he said, is grim. Iran claims that, countrywide, 26 have died from the coronavirus illness (known as COVID-19), out of 245 total infections. All acknowledge that Qom is the center of infection, but many doubt that the numbers are accurate. Another official, a member of Iran’s Parliament from Qom, said last weekend that his city had already lost 50 people to COVID-19. That figure, assuming it’s accurate, suggests that if COVID-19 is as deadly in Iran as it is elsewhere and kills 2.3 percent of its victims, another 2,000 people have the disease in Qom alone.
It is difficult to overstate what a disaster these numbers express—not just for Iran, but for everyone. Qom is a seat of Shiite learning, the spiritual omphalos of Iran, and as a result, it draws the pious from all over the Shiite world. I profiled a Lebanese cleric in Paraguay for The Atlantic in 2009; his previous address had been in a seminary in Qom. On the streets of Qom, you hear Persian spoken in many accents, including Tajik and Afghan. In some restaurants, servers will address you in Arabic, and posters of Muhammad al-Sadr, a revered Iraqi ayatollah, look down at you as eat your kebab. Qom feels like a Shiite Disneyland, filled with religious attractions (with junk food for sale between stations), and that comparison might be the best way for Americans to understand the gravity of this outbreak. What if we found out that thousands of people at Disney World all had a highly contagious, sometimes fatal illness—and that vacationers had been coming and going, returning to their home city, for weeks?
Zeynep Tufekci has written about the advantages and disadvantages of authoritarianism in dealing with a disaster like this. China can lock down a city, quarantining tens of millions at a time, and it can marshal its top experts, allowing them to wage a campaign against the disease with the absolute authority of a caesar. But it can’t avail itself of the benefits of public trust, including transparent and honest accounts of the disease and its toll. In Iran, it appears that the government has all the disadvantages of an unfree society, and none of the compensating advantages. Watch this incredible video, at once comic and horrifying, of a top Iranian health official, Iraj Harirchi, assuring the public that the situation is being addressed, while sweating and coughing on colleagues and his audience because he has contracted the coronavirus:
Nor is he the only top official to have been infected: Today, Masoumeh Ebtekar, Iran’s vice president and a notoriously cruel member of the group of Iranians that held U.S. diplomats hostage in 1979, announced that she, too, has the disease. According to reports, she met with Iranian President Hassan Rouhani and his cabinet just yesterday, potentially exposing the entire senior leadership of Iran to the disease.
Harirchi stated that the government refuses to impose quarantines, because they are premodern and ineffective. Mohammad Saeedi, the head of the shrine in Qom and a local representative of the country’s supreme leader, not only opposes a quarantine but begged people to visit the shrine, calling it a “place of healing.”
At some point, incompetence and evil become indistinguishable. I feel like we have passed this point several times in the past few years, and Iran’s leadership in particular keeps passing it over and over, like a Formula 1 car doing laps. Last month’s accidental downing of a civilian airliner exposed one form of fatal incompetence, followed by an abortive effort to cover it up. Iranians are understandably primed to wonder whether this disaster is similar, a tragedy of malign incompetence that is expanding beyond the government’s ability to contain.
--- ---
...