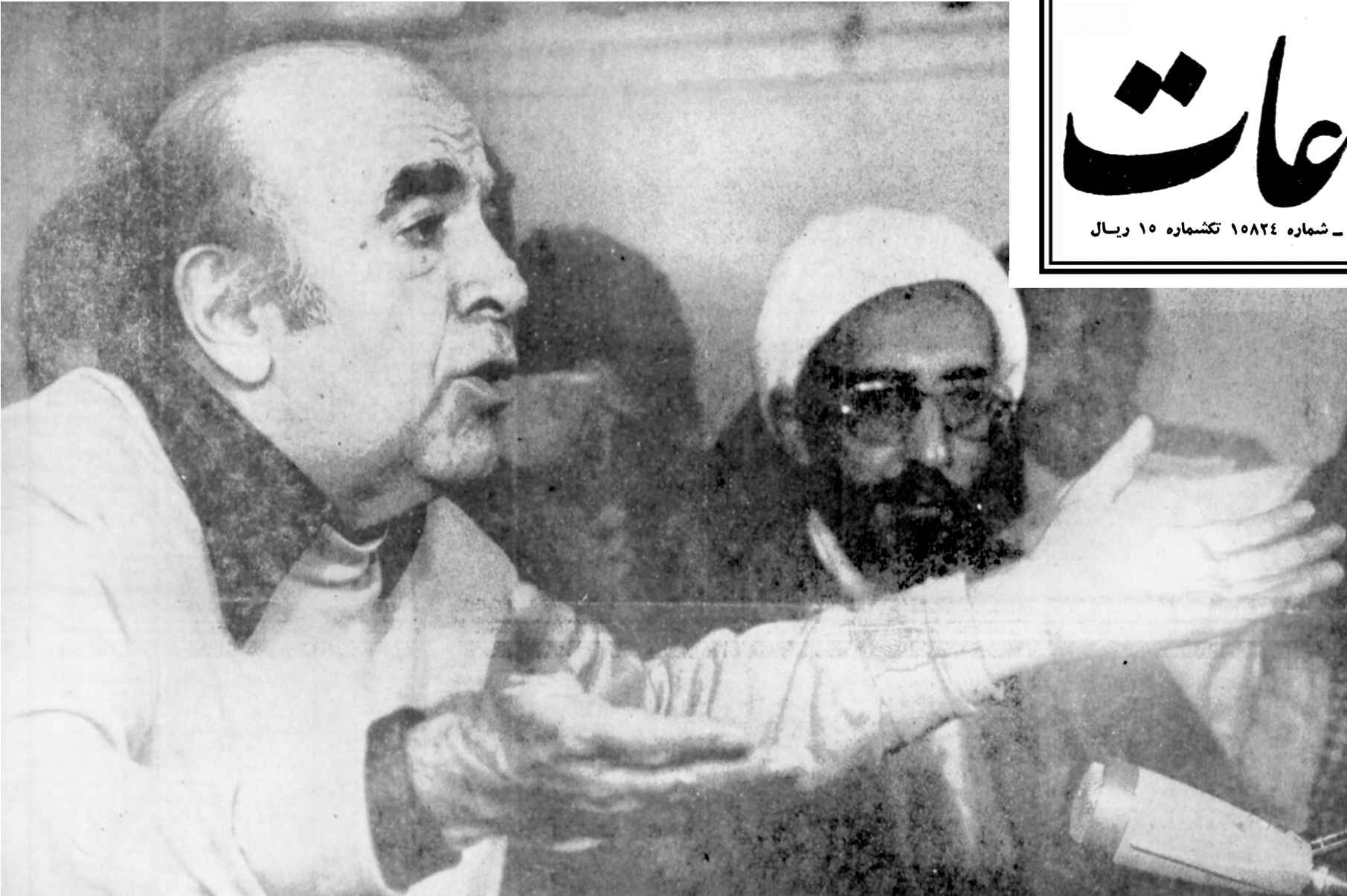 Amir-Abbas Hoveyda (Persian: امیرعباس هویدا‎, romanized: Amīr `Abbās Hoveyda; 18 February 1919 – 7 April 1979) was an Iranian economist and politician who served as Prime Minister of Iran from 27 January 1965 to 7 August 1977. He was prime minister for 13 years and is the longest serving prime minister in Iran's history. He also served as Deputy Prime Minister and Minister of Finance in Mansur's cabinet. After the Iranian Revolution, he was tried by the newly established Revolutionary Court for "waging war against God" and "spreading corruption on earth" and executed.
Trial and execution
Hoveyda was taken to the Refah School, a temporary headquarters for the revolution's vanguard. Because of the departure of the Shah and much of the ruling class, Hoveyda had become the most prized prisoner of the old government. On 15 March 1979, he would face the newly established Revolutionary Court for the first time. During this time he attempted to create his legal arguments for the court. He was interviewed by Belgian journalist Christine Ockrent, a now infamous interview in which Hoveyda was subject to near accusatory questions by the interviewer.
The clerical judge appointed by Khomeini, Sadeq Khalkhali, would come to be known as the 'Hanging Judge' for his violent approach to revolutionary justice. He was the head of the tribunal that had assembled to try the former prime minister. Prior to Hoveyda's trial, Khalkhali had already ordered the execution of dozens, possibly hundreds of political prisoners, and would eventually be responsible for thousands of executions. Traditional conventions of the judiciary had all but been abandoned during the trials of Hoveyda and countless others. Among many of the anomalous traits personified by the trial, the court ignored notions of due process, impartiality of the judge, allowing the defendant to consult legal options. Many pundits have come to conclude that the verdict was already made by the likes of Ayatollah Khomeini before the trial ever commenced. Khalkhali's indictment of Hoveyda was as follows:
Amir Abbas Hoveyda, son of Habibollah, birth certificate number 3542, issued in Tehran, born in 1298 (1920), previously minister of the deposed royal court, and the Shah's ex-Prime Minister, a citizen of Iran, is accused of:
Spreading corruption on earth.
Fighting God, God's creatures and the Viceroy of Imam Zaman.
Acts of sedition detrimental to national security and independence, through forming cabinets that were puppets of the United States and England and defending the interests of colonialists.
Plotting against national sovereignty by interference in elections to Majlis, appointing and dismissing ministers at the behest of foreign embassies.
Turning over underground resources: oil, copper and uranium, to foreigners.
Expansion of the influence of American Imperialism, and its European allies, in Iran by destroying internal resources and turning Iran into a market for foreign commodities.
Paying national revenues from oil to the Shah and Farah and to countries dependent on the West and then borrowing money at high interest, and enslaving conditions from America and Western countries.
Ruining agriculture and destroying forests.
Direct participation in acts of espionage for the West and Zionism.
Complicity with conspirators from CENTO and NATO for the oppression of the peoples of Palestine, Vietnam and Iran.
Active member of Freemasonry in the Foroughi Lodge according to existing documents and the confessions of the accused.
Participation in terrorizing and frightening the justice seeking people including their death and injury and limiting their freedom by closing down newspapers and exercising censorship on the print media and books.
Founder and first secretary of the despotic "Rastakhiz of the Iranian People" party.
Spreading cultural and ethical corruption and direct participation in consolidating the pillars of colonialism and granting capitulatory rights to Americans.
Direct participation in smuggling heroin in France along with Hassan Ali Mansour.
False reporting through the publication of puppet papers and appointing puppet editors to head the media.
According to minutes of cabinet meetings and of the Supreme Economic Council, and the claims of private plaintiffs, including Ali Sayyed Javadi, and taking into account documents found in SAVAK and the office of the prime minister, and the confessions of Manouchehr Azmoun, Mahmoud Jafarian, Parviz Nick-khah, and the confessions of the accused, since the commission of the crimes is certain, the prosecutor of the Islamic Revolutionary Court asks the court to issue the judgment of the death penalty and the confiscation of all your property.
The composition of the trial's proceedings reflected the style in which the indictment was designed and promulgated. Many of the charges were never substantiated and often reflected uninvestigated rumours of the day. Abbas Milani agrees with this notion when he described the essence of the court's ambience:
“ It became clear that rules of evidence, notions of innocence until proven guilty, and a dispassionate judge, dispensing impartial judgments based on incontrovertible evidence, were all alien to this court … Gossip had the authority of fact, as evident in article fifteen of the indictment, and unsubstantiated rumours were taken as proof of guilt. 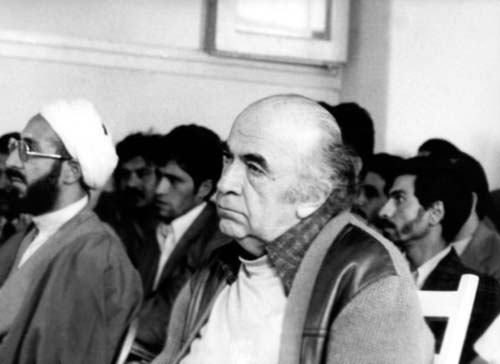 On 7 April 1979, Hoveyda was transported to Qasr Prison, once a getaway palace for monarchs of the Qajar dynasty, but converted into a prison during the 1920s. By this time, he was now aware that there would be no mercy for him, and the whole charade would end in his own death. Quickly shuffled back in front of Khalkhali's tribunal, he once again heard the court's indictment at three in the afternoon. There is some speculation as to who ordered the resumption of the trial. Bani Sadr, one among many leaders of the Provisional Revolutionary Government who advocated a public trial, states that only Khomeini himself had the authority to make such an order. Behind locked doors, Hoveyda's fate, which had already been decided upon by Khomeini days earlier, was sealed.
Khalkhali repeatedly yelled at and insulted Hoveyda during much of the trial, calling him "a corrupter of the earth" and a "Western criminal puppet", refusing to allow him to make a testimony in his defense. In defiance, Hoveyda denounced Khalkhali and informed him that he had no intention of defending himself any longer in front of a sham court. Immediately, Khalkhali announced his sentence, death by firing squad and confiscation of all material possessions.
Minutes later, the former Prime Minister was taken into the prison's yard. Before reaching the area designated for firing squad executions, Hojatoleslam Hadi Ghaffari, (currently a political reformist) pulled out a pistol and shot Hoveyda twice in the neck. He was left on the ground in agony, begging for the executioners to "finish him off". Seconds before the coup de grace was at last given, Hoveyda is said to have gasped to the guard standing over him: "It wasn't supposed to end like this". According to the autopsy report, he apparently also was beaten shortly before his execution.
Hoveyda's corpse was held in Tehran's morgue for several months after his execution, before it was secretly released to his immediate family and buried in Behesht-e Zahra cemetery in Tehran as an unknown deceased.
Following his execution, his residence in A.S.P. Towers was looted by revolutionaries. According to some witnesses he rarely had any items of luxury nature. His prized possessions were a rocking chair and a library of few hundred books.
--- ---
...