Former President de Klerk's denial that apartheid was a crime against humanity is cause for reflection on Freedom Day.
By Mia Swart
Freedom Day, celebrated every year on April 27, commemorates South Africa's first democratic election in 1994 - the first time in the history of the country that non-white citizens were allowed to vote.
That election saw Nelson Mandela replace Frederik Willem (FW) de Klerk to become South Africa's first Black president. Mandela's liberation movement-turned-political party, the African National Congress (ANC), meanwhile took the reins from the white nationalist government that had been in power since 1948. All this transpired without the bloodshed many feared would take place.
In the years that led up to those elections, while Mandela was the face of Black forgiveness, de Klerk became the face of white compromise. In 1990, he took the step of unbanning the ANC and freed Mandela from 27 years in prison. He also agreed to the negotiations that would see the peaceful transition from racist rule to democracy.
It was, therefore, shocking to many when, on February 2 this year, de Klerk publicly stated that apartheid was not a crime against humanity in an interview with the national broadcaster, the SABC.
'Treasonous' comments
During the interview, de Klerk said he was "not fully agreeing" with the presenter who asked him to confirm that apartheid - the legalised segregation of and discrimination against non-white people - was a crime against humanity.
Immediately afterwards, the FW de Klerk Foundation supported his statement and published a response that read: "Deplorable as it is, we cannot, from a legal point of view, accept that apartheid can in this manner be made a crime against humanity."
There was an immediate public outcry as well as criticism from the media and other politicians.
Apartheid was so immoral in its conception and so devastating in its execution that there is no South African living today who is not touched by its legacy.
President Cyril Ramaphosa
South African President Cyril Ramaphosa called de Klerk's comments "treasonous".
"Apartheid was so immoral in its conception and so devastating in its execution that there is no South African living today who is not touched by its legacy. I would say that to deny this is treasonous," he said.
Although de Klerk later retracted his statement, the debacle opened old wounds and raised questions about his legacy and the extent to which white South Africans have acknowledged the severity of apartheid.
'We are never seen as human'
"For me and my family, de Klerk's denial of apartheid being a crime against our humanity really hit home quite hard," said Lukhanyo Calata, whose father, Fort Calata, was one of the "Cradock Four" - a group of activists murdered by apartheid security police in 1985.
"[The comments] reinforced our belief that de Klerk has never really seen us as human beings. He's never assigned any human value to our family," he told Al Jazeera.
In its response to de Klerk's statement, the Economic Freedom Fighters (EFF), an opposition party that has called de Klerk an "apartheid apologist" who "has blood on his hands", confirmed it would pursue a murder inquiry into state-sponsored killings that de Klerk had allegedly organised. The organisation also called for de Klerk to be stripped of his Nobel Peace Prize, which he received together with Mandela in 1993, for their collaboration in ending apartheid. 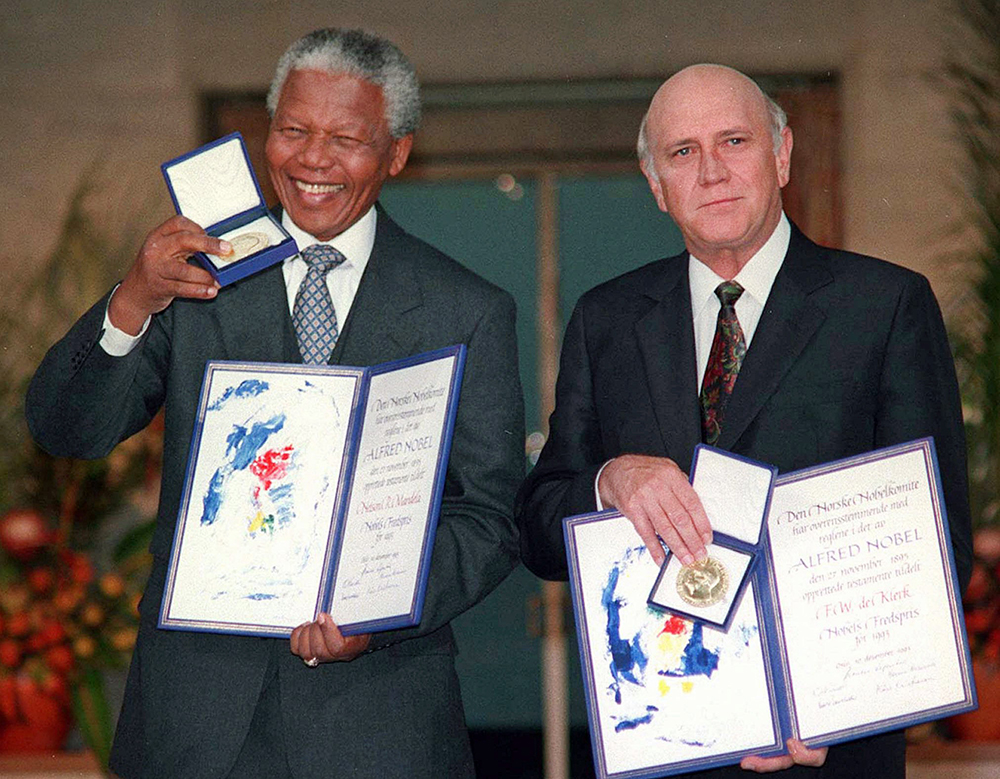 * * * De Klerk, born in 1936, is from a conservative Afrikaner background. His father, Jan de Klerk, was a minister in the cabinet of South African Prime Minister Hendrik Frensch Verwoerd - the man widely regarded as the architect of apartheid.
For decades, FW de Klerk was a committed supporter of apartheid. Elected as a member of Parliament in 1972, he held the ministerial portfolios of mines and energy affairs, internal affairs, and national education and planning. During his time as a cabinet minister, he was considered more conservative than many of his ministerial colleagues.
Ferial Haffajee, a South African journalist, wrote that her abiding memory of de Klerk during apartheid was of the man who passed the university bills that sought to make it more difficult for black people to gain access to white universities.
So it came as a surprise to many when de Klerk announced in Parliament on February 2, 1990, that he would unban the ANC and release Mandela.
The 'myth' of the liberator
In the decades since, many have asked whether de Klerk's U-turn from his conservative past was the result of pragmatism or of a sincere conviction that apartheid was morally wrong.
"De Klerk attempted to hold himself aloof from apartheid crimes against humanity, as did many others who were aware of the illegal and extrajudicial acts of the government," South African journalist Marianne Thamm told Al Jazeera. "By convincing himself he did not know of the gory details, he was able to pass himself off as a relatively 'untainted' and 'progressive' leader."
On the difference between de Klerk and Mandela, Thamm writes: "De Klerk's heart, a heart that has grown the carapace of the consummate pragmatic politician. And that was the singular and unique magic of Nelson Mandela, he revealed his heart while at the same time keeping his head - the mark of a true statesman."
Referring to the "myth" that de Klerk was a liberator, Haffajee writes: "Not then and not now have a generation of us bought into the myth, so his statement, now retracted, that apartheid was not a crime against humanity was hardly surprising to many of us."
Apartheid as an international crime
From 1952 to 1990, apartheid was condemned annually by the United Nations General Assembly as contrary to the Charter of the United Nations.
The 1973 Apartheid Convention required states to both suppress and punish acts of apartheid. At the time of the signing of this Convention, the South African government ignored it.
The inclusion of apartheid in the 2002 Rome Statute of the International Criminal Court was the strongest acknowledgement yet that apartheid was an international crime. It defines apartheid as inhumane acts of a character similar to other crimes against humanity "committed in the context of an institutionalized regime of systematic oppression and domination by one racial group over any other racial group or groups and committed with the intention of maintaining that regime".
Christopher Gevers, senior lecturer at the University of KwaZulu-Natal, is critical of the trade-off that South Africa's democratic government made through the country's Truth and Reconciliation Commission (TRC) because he saw that it meant truth came at the expense of justice. 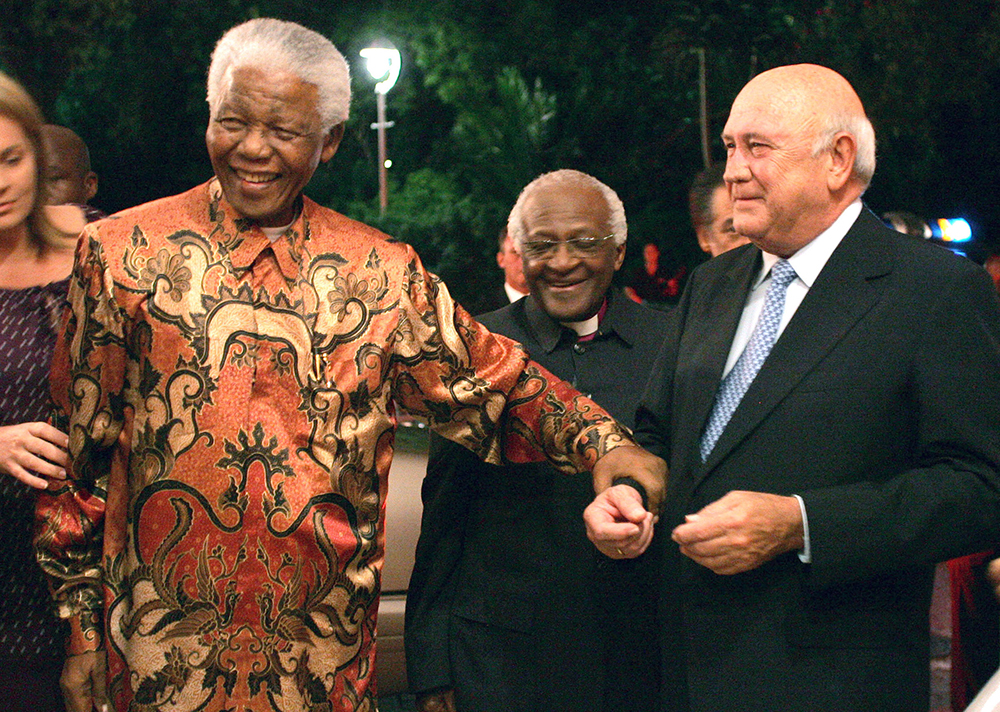 * * * "Twenty-six years on, not only have we failed to prosecute those who blatantly refused to prosecute the bargain, but the promised 'truth and reconciliation' is wearing thin," he said to Al Jazeera. Gevers points to the fact that the crime of apartheid has never been prosecuted in South Africa or anywhere else in the world.
De Klerk's comment came at a particularly difficult time for South Africa.
As Nobel laureate and former archbishop of Cape Town, Desmond Tutu, said in his foundation's statement on February 16, South Africa "is on an economic precipice. It is beset by radical poverty and inequity. Those who suffered most under apartheid continue to suffer most today."
Inadequate apologies
February was not the first time de Klerk was criticised for his public statements on apartheid.
He initially apologised for apartheid on April 29, 1993. That apology was widely regarded as inadequate, since it did not disclose de Klerk's personal participation in apartheid crimes.
Subsequently, during his testimony to the TRC in 1997, de Klerk described his initial apology as an "unqualified apology". He pushed back against those who attacked it as an attempt to defend or justify the policies of the past.
Leon Wessels, a cabinet minister during de Klerk's presidency, told Al Jazeera: "The de Klerk that appeared before the TRC was a jurist and an intellectual. De Klerk did not seem to be emotionally present."
Veteran journalist Max du Preez found it particularly disappointing that de Klerk never asked for forgiveness before the TRC.
Political commentator and academic William Gumede believes one reason for the strong outcry after de Klerk's February statement is the opportunism of the populist left, represented by the EFF. He said the current climate is "particularly inflammable". Like Tutu, Gumede also believes the difficult economic situation means poorer South Africans are particularly disgruntled.
"We haven't had an official state apology. An apology would give recognition to suffering," said Gumede.
White denial
Christi van der Westhuizen, an associate professor at the Centre for the Advancement of Non-Racialism and Democracy at Nelson Mandela University, believes the recent outcry is indicative of a reaction to the hardening of white attitudes in recent years.
"These attitudes can, in turn, be relayed to the ANC government's 'lost decade' due to grand scale corruption," she said.
She believes the denial of the severity of apartheid constitutes apartheid denial. "There is an obfuscation of the dehumanisation of marginalised groupings under apartheid," she said.
This history in its fullness has not yet been told. And the damage wreaked on the lives of millions of South Africans over a sustained period of time ... and the ramifications of this on generations, is still here with us.
Marianne Thamm, journalist
Journalist Thamm told Al Jazeera: "The outcry this year is because there is much unfinished business and there will never be resolution. Enough evidence emerged at the TRC of the murder and savagery of the apartheid state."
Thamm believes de Klerk's denial was indicative of a more general unwillingness on the part of white South Africans to recognise the severity of apartheid.
"This history in its fullness has not yet been told. And the damage wreaked on the lives of millions of South Africans over a sustained period of time, to be dispossessed, to be rendered a 'nothing' legally, and the ramifications of this on generations, is still here with us," she said.
'Confusion, anger and hurt'
Two weeks after de Klerk said apartheid was not a crime against humanity, he retracted his statement, after Tutu asked him to.
Speaking through his foundation on February 17, de Klerk declared apartheid "totally unacceptable" and conceded that the UN had previously highlighted that the era was indeed a humanitarian offence. He said he was sorry for causing "confusion, anger and hurt" with his words.
In spite of the subsequent retraction, de Klerk's denial of the grave and systematic abuses of apartheid has left a scar.
According to Calata, who lost his father to the apartheid state apparatus, "an apology should come out of de Klerk's mouth. It should not appear on some lifeless piece of paper that was most probably not even written by him. So, for me, there's no satisfaction, as there was no apology."
As journalist Tony Heard writes: "Doubts linger after such incidents, for anyone interested in the future social stability of South Africa."
--- ---
...