Not kitten around: Siberian cat named Mir that Putin gifted to Japanese governor placed in isolation over coronavirus

Not kitten around: Siberian cat named Mir that Putin gifted to Japanese governor placed in isolation over coronavirus ...
rt.com 30/04/2020 Nature 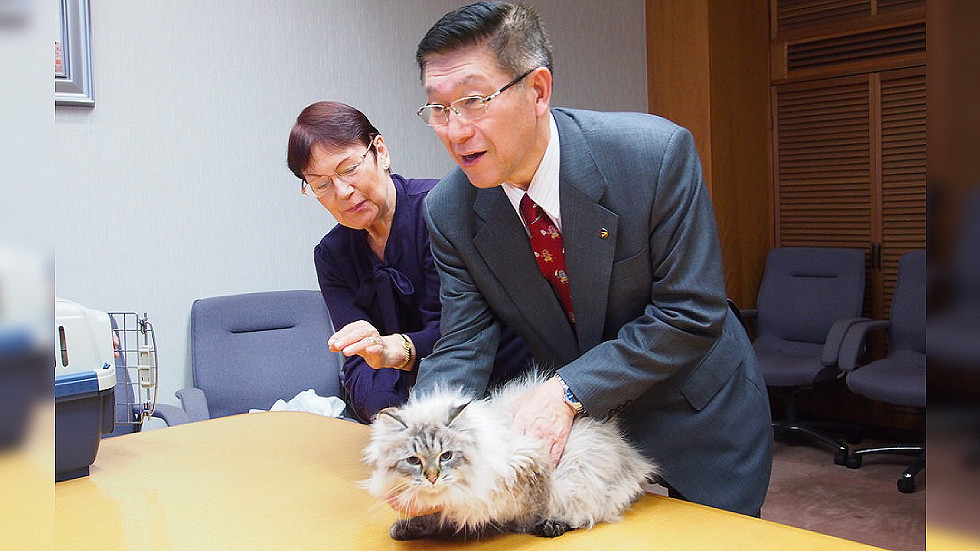 A Siberian cat named Mir that Russian President Vladimir Putin gifted to the Governor of Japan’s Akita prefecture has been placed in quarantine over the paw-sibility that it could catch Covid-19.
President Putin gave Norihisa Satake the 11-month-old gray kitten back in 2012, after the governor gifted him an Akita Inu puppy called Yume (‘Dream’). The governor’s gift was in gratitude for Russia helping Japan deal with the aftermath of the earthquake and tsunami that caused a meltdown at the Fukushima nuclear power plant in 2011.
Mir quickly became a beloved member of the governor’s household, learning to recognize Japanese and quickly bulking up, owing to his love of food.
The governor of the northern prefecture has now taken extraordinary measures to protect his furry friend, placing him in isolation to ensure he doesn’t contract the coronavirus.
“We were very alarmed by the news that cases of infection of domestic cats with the new coronavirus were noted in the USA,” Satake told the Tass news agency. “Therefore, we have now made sure that Mir doesn’t communicate with anyone except our family members, just in case. We really hope for the speedy conclusion of the current situation, when the threat of infection makes people and animals suffer."
今日2/12は、シベリア猫 #ミール君 の誕生日！ロシアのプーチン大統領から佐竹知事に贈られたミール君は８歳になりました。なお、映像第９弾は、#猫の日 （2/22）に公開予定です。ミール君？という方は、リンク先ページをご覧ください。https://t.co/D059Ifaq4n#HappyBirthday# 誕生日pic.twitter.com/MzPHCaW6k8
— 秋田県庁 (@pref_akita) February 12, 2020
The governor added that Mir has become very precious to him in the eight years since President Putin gifted the cat to his family. He said the Siberian cat, which has a great appetite, is strong and cheerful, has a calm character and coexists purrfectly with the six other cats that live in the house. “This is a special creature for me – [my] soul is resting when I see its muzzle,” he said.
There is currently no evidence that cats can pass Covid-19 on to humans. However, several are confirmed to have contracted the illness. And even big cats aren’t immune from the disease, with a tiger in New York’s Bronx Zoo becoming a confirmed carrier of the virus.
Thankfully, Mir, whose name means ‘Peace’, is said to be feline fine and there’s no indication that he has caught the disease. rt.com 09/08/2013 News
Moscow has said “no” to Saudi Arabia’s alleged proposal of a rich arms deal and protection of Russia’s gas interests in the Middle East in exchange fo...View Details»