The Trump Administration Is Suddenly Pretending That It Didn’t Blow Up the Iran Nuclear Deal ...
slate.com 30/04/2020 Politics 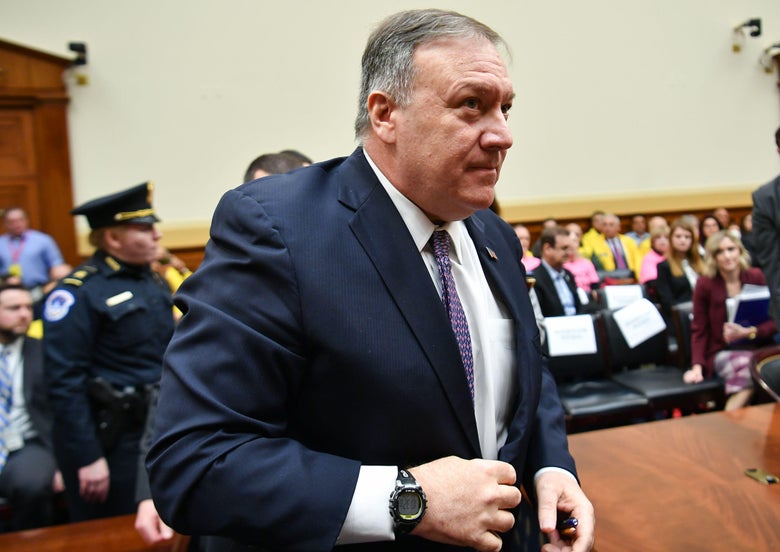 Iran nuclear deal: Trump and Pompeo backtrack on withdrawal with snapback clause threats.
By Fred Kaplan
April 28, 2020
While everyone is riveted to the deadly grind of COVID-19, the Trump administration is stepping up its efforts to crush the Islamic Republic of Iran through one of the most squirrely legal arguments that a nation-state has ever devised.
“Psych,” Mike Pompeo did not say, but could have. (Above, Pompeo after testifying before the House Foreign Affairs Committee on Capitol Hill on Feb. 28.)

* * * Mandel Ngan/Getty Images
The move is also a political shot in the foot, because it amounts to an unwitting admission that President Donald Trump was wrong to pull out of the Iran nuclear deal.
Signed in 2015 by then­-President Barack Obama and the leaders of five other nations, the deal—which was codified as a U.N. Security Council resolution—required Iran to dismantle nearly all of its nuclear program; in exchange, the signatories and the U.N. would lift most of their sanctions against Iran, as well as normalize business relations with the country.
Trump withdrew from the deal in 2018, not because Iran was cheating—in fact, international inspectors affirmed in their regular reports that Iran was abiding by the deal’s terms—but rather because Trump simply didn’t like it: didn’t like anything to do with Iran, didn’t like anything accomplished by Obama.
Pompeo’s argument is bogus on several counts.
With the withdrawal, Trump reimposed sanctions against Iran, then threatened to impose new sanctions on countries that did business with Iran—and those countries, which were dependent on transactions with the U.S.-controlled financial system, reluctantly obeyed.
This was part of Trump’s “maximum pressure” policy, which he was sure would cause the mullahs of Tehran to cave in—either to negotiate a deal more to his liking or (the real aim) to implode as a regime. However, the mullahs are still here. In fact, the failure of the nuclear deal has strengthened the hands of the regime’s most hard-line factions.
So Secretary of State Mike Pompeo has stepped up the pressure, and in a way that has made observers around the world drop their jaws or scratch their heads.
According to the New York Times, Pompeo is making a legal argument that the United States is still a “participant” in the Iran nuclear deal. As such, he is saying, Trump will soon invoke a clause in the deal, known as the “snapback clause,” which requires the U.N. Security Council to reimpose economic sanctions if Iran is found to be cheating. Since, by its own admission, Iran has violated some aspects of the deal in recent months, the sanctions will automatically be reimposed once Trump raises the transgressions.
Pompeo’s argument is bogus on several counts. First, given Trump’s formal withdrawal from the Iran nuclear deal, it is preposterous to claim that the United States is still a participant. Or, if Trump wants to claim he is a participant, he first has to lift the sanctions he reimposed two years ago. He can’t embrace one part of an accord while rejecting all the other parts.
Second, since last summer, Iran has amassed a somewhat larger nuclear stockpile and enriched more uranium than the deal allows, but it did so in response to Trump’s withdrawal from the deal and his success at pressuring other signatories to restore sanctions. Ironically, Iran’s move was fully consistent with the terms of the nuclear deal—specifically with Paragraph 36, which states that if one signatory believes that the others “were not meeting their commitments,” then, after certain meetings and consultations, it would have “grounds to cease performing its commitments.” (Iranian diplomats tried to dissuade the European signatories from restoring sanctions for a full year before expanding its nuclear program.) In other words, technically, Iran is still acting under the terms of the deal. Its diplomats say that, if the U.S. and the other nations lifted the sanctions once again, Iran would scale back its stockpile and enrichment.
Third, Trump was in violation of the deal even before he withdrew from it. Back in July 2017, at his first G-20 summit, he pressured allied leaders to stop doing business with Iran. This pressure contravened Paragraph 29 of the accord, which states that the U.S. and the other signatories “will refrain from any policy specifically intended to directly and adversely affect the normalization of trade and economic relations with Iran inconsistent with the commitments not to undermine the successful implementation” of the deal.
Still, none of this means Pompeo will let the matter drop or that other nations won’t let him get away with such a duplicitous move. If the United States declares itself a participant in the Iran nuclear deal and invokes the snapback clause—and if the country chairing the Security Council at the time bangs the gavel in assent—then, under the terms of that clause, the deed will be done; there will be no vote, much less an opening for a veto.
“This would create something like a constitutional crisis at the Security Council,” says Trita Parsi, executive vice president of the Quincy Institute and author of Losing an Enemy: Obama, Iran, and the Triumph of Diplomacy. Parsi also predicts that, if this happens, not only will the Iranians give up hoping for a return to the nuclear deal, they will probably also withdraw from the Nuclear Non-Proliferation Treaty. “This is what Trump and Pompeo want,” Parsi told me in a phone conversation. “They want a legal foundation for regime change or war.”
Meanwhile, owing to administrative incompetence, political repression, and a woeful lack of resources, nearly 100,000 cases of the coronavirus—resulting in more than 5,800 deaths—have been reported in Iran. Stiffened sanctions will only worsen the country’s plight, which Pompeo no doubt regards as an enhanced measure in his “maximum pressure” campaign. That will push the regime over the edge, he may be thinking. Maybe so; probably not. Either way, it will kill a lot more Iranians, and Trump and Pompeo don’t seem to care. If there is regime change, that pretty much ensures the new regime won’t be any less suspicious toward America than the current one. It will possibly be more hostile still.
--- ---
...