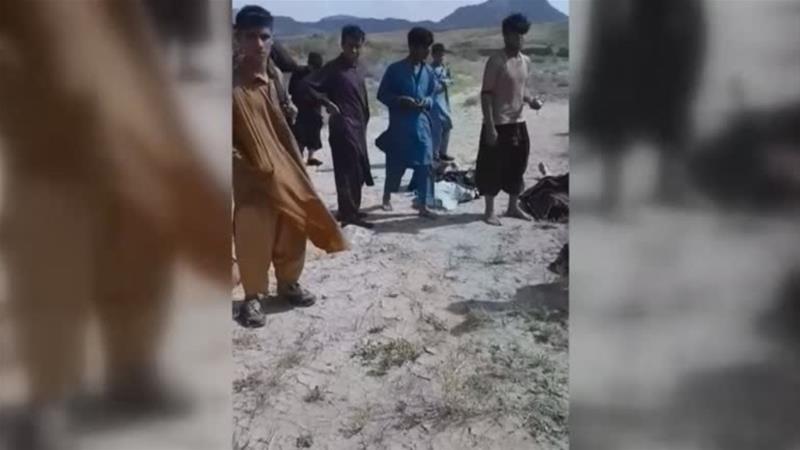 Survivors say at least 23 of 57 people thrown by Iranian border guards into Harirud River drowned.
Afghanistan has begun retrieving bodies of Afghan migrants from a river in a western province after reports that Iranian border guards tortured and threw Afghans into the river to prevent their entry into Iran.
Afghanistan's foreign ministry in a statement on Saturday said an inquiry had been launched and a senior official in the presidential palace in Kabul said initial assessments suggested that at least 70 Afghans who were trying to enter Iran from bordering Herat province were beaten and pushed into Harirud River.
The Harirud River basin is shared by Afghanistan, Iran and Turkmenistan.
Doctors at Herat District Hospital said they had received the bodies of Afghan migrants, some of whom had drowned.
"So far, five bodies have been transferred to the hospital, of these bodies, its clear that four died due to drowning," said Aref Jalali, head of Herat District Hospital.
The Iranian consulate in Herat denied the allegations of torture and subsequent drowning of dozens of Afghan migrant workers by border police.
"Iranian border guards have not arrested any Afghan citizens," the consulate said in a statement on Saturday.
Noor Mohammad said he was one of 57 Afghan citizens who were caught by Iranian border guards on Saturday as they tried to cross into Iran in search of work from Gulran District of Herat.
"After being tortured, the Iranian soldiers threw all of us in the Harirud river," Mohammad told Reuters News Agency.
Shir Agha, who said he also survived the violence, said at least 23 of the 57 people thrown by Iranian soldiers into the river had died.
"Iranian soldiers warned us that if we do not throw ourselves into the water, we will be shot," said Agha.
'We will settle accounts'
Local Afghan officials said it was not the first time Afghans had been tortured and killed by Iranian police guarding the 920km (520 mile) long border.
Herat Governor Sayed Wahid Qatali in a tweet to Iranian officials said: "Our people are not just some names you threw into the river. One day we will settle accounts."
The incident could trigger a diplomatic crisis between Iran and Afghanistan at a time when the coronavirus pandemic has seen a mass exodus of Afghan migrants from Iran with many testing positive for COVID-19.
Up to 2,000 Afghans daily cross the border from Iran, a global coronavirus hotspot, into Herat.
As of Sunday, at least 541 infected people are from Herat province, which recorded 13 deaths, with the majority of positive cases found among Afghan returnees from Iran, said Rafiq Shirzad, a health ministry spokesman in Herat.
SOURCE: Reuters news agency

english.farsnews.com 08/09/2013 News
TEHRAN (FNA)- The attack on the Iranian Consulate in Afghanistan’s Southeastern city of Herat on Saturday was a premeditated move to damage Tehran-Kab...View Details»