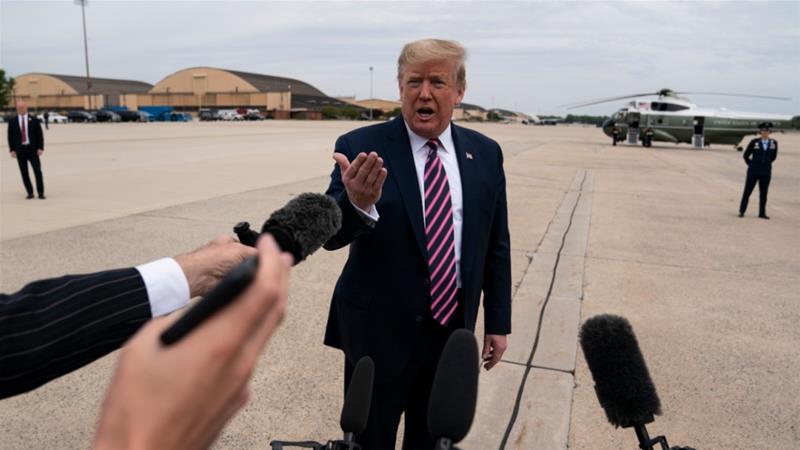 United States President Donald Trump on Wednesday vetoed legislation passed by both houses of Congress seeking to limit a president's ability to wage war against Iran.
"This was a very insulting resolution, introduced by Democrats as part of a strategy to win an election on November 3 by dividing the Republican Party," Trump said in a statement released by the White House. "The few Republicans who voted for it played right into their hands," he said.
The US Senate, where Trump's fellow Republicans hold a 53- to 47-seat majority, is expected to hold a veto override vote as soon as Thursday.
The resolution, which passed the House of Representatives in March and the Senate in February, was the latest effort by Congress to wrest back from the White House its constitutionally guaranteed authority to declare war.
A handful of Republicans in both houses supported the measure when it passed, but not enough to muster the two-thirds majority necessary in both houses to override a veto.
The US House of Representatives passed the resolution in an attempt to stop Trump from further military action against Iran, rebuking the president after he ordered a January 3 drone strike that killed top Iranian commander General Qassem Soleimani, bringing the two nations to the brink of war.
The Democratic-controlled House voted 227-186, mostly along party lines, sending the war powers resolution to the Senate. The partisan vote reflected the deep divide in Congress over Trump's Iran policy and how much of a say lawmakers should have over the use of the military.
Democrats accused Trump of acting recklessly and backed the resolution, while Trump's fellow Republicans, who rarely vote against the president, opposed it.
Republicans said Democrats endangered the country by trying to pass a resolution they characterised as an empty political gesture, at the start of a US general election year.
The War Powers Act, which was passed in 1973 as Congress reacted to secret bombings during the bitterly divisive Vietnam War, says the House and Senate can pass a resolution to force the withdrawal of troops engaged in a foreign conflict without Congress's consent.
The move marks the seventh time Trump has used his veto pen, including on a previous war powers resolution related to the US military's assistance to Saudi Arabia in Yemen's civil war.
SOURCE: Reuters news agency

Senator: Trump may use Iran threat to sell bombs to Saudi Arabia...