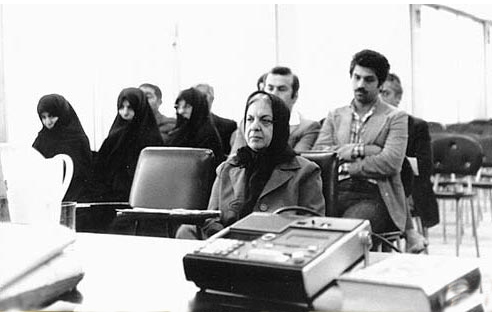 Farrokhroo Parsa (Persian: فرخ‌رو پارسا‎; 24 March 1922 – 8 May 1980) was an Iranian physician, educator and parliamentarian.
She served as Minister of Education of Iran under Amir Abbas Hoveida and was the first female cabinet minister of an Iranian government. Parsa was an outspoken supporter of women's rights in Iran.
Farrokhroo Parsa was executed by firing squad on 8 May 1980 in Tehran, at the outset of the Islamic Cultural Revolution.
Farrokhroo Parsa was born on 24 March 1922 in Qom, Iran to Farrokh-Din and Fakhr-e Āfāgh Pārsāy. Her mother, Fakhr-e Āfāgh, was the editor of the women's magazine Jahān-e Zan ("The World of Woman"), and a vocal proponent for gender equality and for educational opportunities for women. Her views on this subject met with opposition of the conservative sections of the society of her time, leading to the expulsion of the family by the government of Ahmad Qavām, from Tehran to Qom, where Fakhr-e Āfāgh was placed under house arrest. It was here that Farrokhroo was born, some minutes past midnight on Iranian New Year's Eve 1922 (Nowruz, 1301 AH). Later, with the intervention of Prime Minister Hasan Mostowfi ol-Mamalek, her family was allowed to return to Tehran.
Upon obtaining a medical degree, Parsa became a biology teacher in Jeanne d'Arc Highschool in Tehran. At the school she came to know Farah Diba, one of her students at this school, and who would later become wife of King Mohammad Reza Pahlavi.
In 1963, Parsa was elected to parliament (the Majles), and began petitioning Mohammad Reza Pahlavi for suffrage for Iran's women. She was also a driving force for legislation that amended the existing laws concerning women and family. In 1965 Pārsā was appointed Deputy Minister of Education and on 27 August 1968 she became Minister of Education in the cabinet of the Amir-Abbas Hoveyda government. It was the first time in the history of Iran that a woman occupied a cabinet position. Farrokhroo Parsa was executed by firing squad on 8 May 1980 in Tehran, at the outset of the Islamic Cultural Revolution.
In her last letter from prison, Farrokhroo Parsa wrote to her children: "I am a doctor, so I have no fear of death. Death is only a moment and no more. I am prepared to receive death with open arms rather than live in shame by being forced to be veiled. I am not going to bow to those who expect me to express regret for fifty years of my efforts for equality between men and women. I am not prepared to wear the chador and step back in history."
Her successor as the Education Minister of Iran, Manouchehr Ganji another minister before the Islamic revolution, expressed surprise at her execution: she was "a lady, Doctor, a competent physician who entertained good relations at the Ministry with revolutionaries like Beheshti, Bahonar, and Rejaii." In fact, during her tenure as minister of education, Beheshti, Bahonar and Mohammed Mofatteh were on the ministry's payroll. These three were to be major players in the Islamic Revolution several years later. With her ministry's funding, Beheshti established the Islamic Center of Hamburg and Bahonar was able to set up a few Islamic public schools around Tehran.
--- ---...

Sanctions Have Only Steeled Iran against US, and Given Power to China...

oilprice.com 06/11/2013 Politics
By Economywatch | Mon, 04 November 2013 23:02 Washington sanctions on Iran have undermined the very goals that it would like to achieve. Rather than e...View Details»