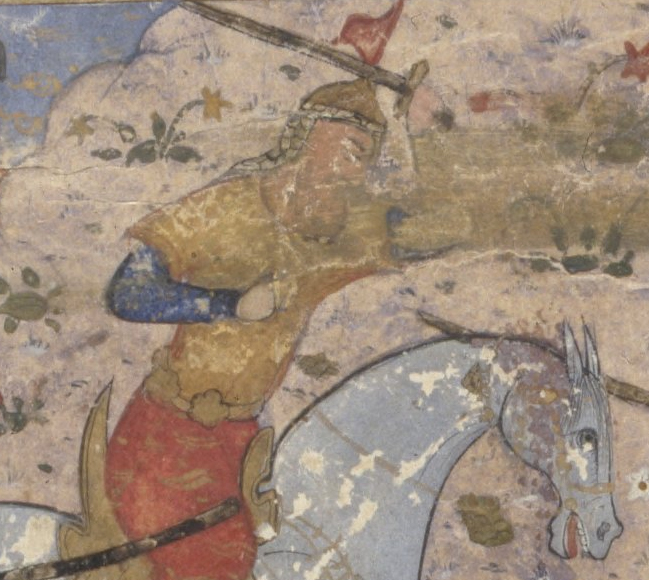 Battle of Namaraq (Arabic: معركة النمارق‎) (634 CE) was a conflict between Muslims and the Sasanians that occurred in Namaraq, near modern-day Kufa (Iraq). During the Khilafat of Abu Bakr, Muslims under the command of Musana and Khalid bin Walid conquered Al-Hirah, a part of the Persian Empire. The Persians became furious and determined to recover Al-Hirah from the Muslims. Rostam Farrokhzād, a famous Sasanian general, sent some of his relatives from the Ispahbudhan family along with some Persian generals. Khalid bin Walid had already left for Syria so Musana had to fight alone. Umar sent Abu Ubaid with reinforcements. In the battle that followed the Persians were defeated.
Rostam Farrokhzād (Persian: رستم فرخزاد‎) was an Iranian nobleman from the Ispahbudhan family, who served as the spahbed ("army chief") of Adurbadagan and Khorasan during the reign of Boran (r. 631–632) and Yazdegerd III (r. 632–651). Rostam is remembered as a historical figure, a character in the Persian epic poem Shahnameh, and as a touchstone of most Iranian nationalists.
There are multiple accounts detailing the death of Rostam, but all of them state that he perished during the battle.
One account states that Rostam was found dead in the sandstorm with over 600 wounds on his body. However, the Persians were not aware of his death and continued to fight. The Sassanid right wing counter-attacked and gained its lost position, as the Muslims' left wing retreated back to their original position. The Muslims' left center, now under Qa’qa's command, when denied the support of their left wing, also retreated back to its original position. A version from Ya'qubi further elaborates that Dhiraar bin Al-Azwar, Tulayha, Amru bin Ma'adi Yakrib and Kurt bin Jammah al-Abdi were the men that discovered the corpse of Rostam.
Two additional narratives also exist, but both have been suggested to likely be the untrustworthy inventions of later story-tellers intending to mock and romanticize the incident respectively. They are as follows:
During the final day of the battle, there was a heavy sandstorm facing the Sasanian army. Rostam used a camel loaded with weapons as shelter to avoid the sandstorm. Not knowing that Rostam was behind, Hilāl ibn `Ullafah accidentally cut the girdle of the load on the camel. The weapons fell on Rostam and broke his back leaving him half dead and paralyzed. Hilal beheaded Rostam and shouted "I swear by the God of Kaaba that I have killed Rostam." Shocked by the head of their legendary leader dangling before their eyes, the Sassanid soldiers were demoralized, and the commanders lost control of the army. Many Sassanid soldiers were slain in the chaos, with some escaping through the river, and finally the rest of the army surrendered. However, due to the presence of inconsistencies, literary devices, and comedic elements, it has been suggested that this account is unreliable and highly improbable, with even the identity the Arab soldier that delivered the death blow being disputed.
A second account, likely developed in response to the first, instead has Rostam face the Arab commander, Sa'd, in personal combat. During the fight, Rostam is temporarily blinded by the sandstorm which gives his opponent an opportunity to strike and kill him.
Aftermath
The defeat of Rostam's army heavily demoralized the people of the Sasanian Empire. Soon, after Rostam's death, many more Sasanian veterans were killed, which included: Piruz Khosrow, Shahrvaraz Jadhuyih, Mardanshah in 642, and Siyavakhsh and Muta of Dailam in 643. In 651, Yazdegerd III was murdered by Mahuy Suri, and the Arabs conquered Khorasan soon after.
--- ---...

en.wikipedia.org 06/05/642 History
The Battle of Spahan was fought between the Rashidun Caliphate and the Sasanian Empire in 642. The Arabs were victorious during the battle, where they...View Details»

en.wikipedia.org 09/05/633 History
The Battle of Walaja (Arabic: معركة الولجة‎) was a battle fought in Mesopotamia (Iraq) in May 633 between the Rashidun Caliphate army under Khalid ibn...View Details»