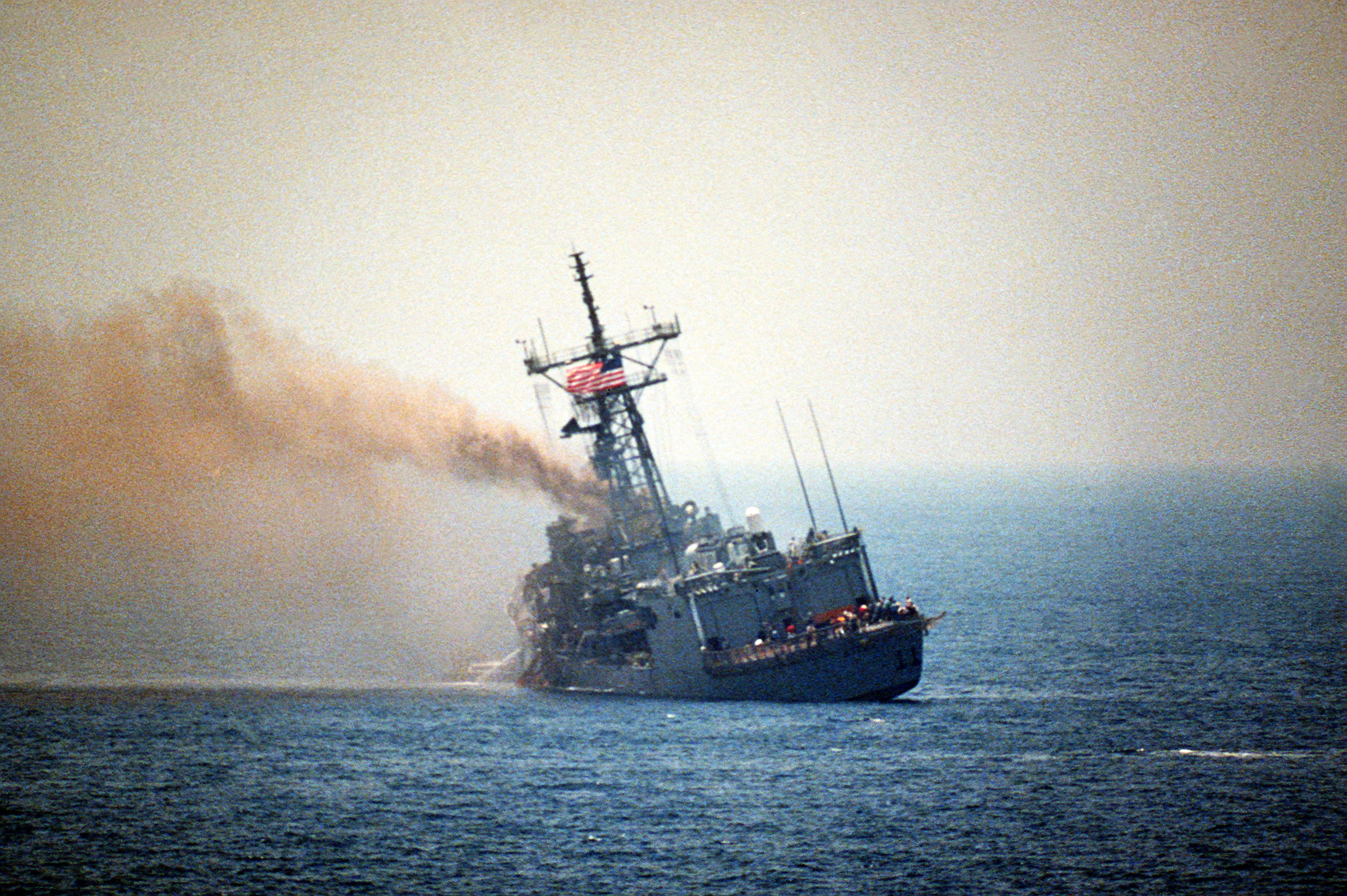 The USS Stark incident occurred during the Iran–Iraq War on 17 May 1987, when an Iraqi jet aircraft fired two missiles at the American frigate USS Stark. A total of thirty-seven United States Navy personnel were killed or later died as a result of the attack, and twenty-one were injured.
USS Stark was part of the Middle East Task Force assigned to patrol off the Saudi Arabian coast near the Iran–Iraq War exclusion boundary. The United States Central Command identified the attacking aircraft as an Iraqi Dassault Mirage F1 fighter.
Initially not alarmed, at 22:09 Captain Glenn R.
Brindel ordered a radioman to send the message: "Unknown aircraft, this is U.S. Navy warship on your 078 (degrees) for twelve miles. Request you identify yourself." The Iraqi Mirage pilot did not respond to the message. The ship's captain ordered a second message sent, to which there was no reply. At 22:10 hrs Captain Brindel was informed the Iraqi aircraft had targeted his ship, locking his Cyrano-IV fire-control radar onto Stark. The Mirage then fired the first Exocet missile 22 miles (35 km) from the ship, and the second Exocet from 15 miles (24 km). The pilot then banked left and began to withdraw.
Stark's search radar and ESM systems failed to detect the incoming missiles. The first Exocet missile struck the port side of the ship near the bridge. Although it failed to detonate, rocket fuel ignited and caused a large fire that quickly spread throughout the ship's post office, storeroom, and the critical combat operations center (where the ship's weapons are controlled).
The second Exocet also struck the port side. This missile detonated, leaving a 10 by 15 ft (3.0 by 4.6 m) hole in the frigate's left side. Electronics for Stark's Standard Missile defense went out and Captain Brindel could not order his men to return fire. An AWACS plane was still in the area and just after witnessing the attack, radioed a nearby Saudi airbase to send aircraft for an interception, but the ground controllers did not have the authority to order a sortie and the Iraqi jet left unharmed. The USN (United States Navy) rules of engagement applicable at the time allowed Stark to defend herself after sufficiently warning the hostile aircraft. A total of 37 crew were killed in the attack, 29 from the initial explosion and fire, including two lost at sea. Eight would later die from their injuries. Twenty-one others survived their wounds.
Captain Brindel ordered the starboard side flooded to keep the hole on the hull's port side above water. This helped prevent the Stark from sinking. Brindel quickly dispatched a distress call after the first missile hit. It was received by USS Waddell, which was in the area, and USS Conyngham with two-thirds of its crew on liberty in Bahrain. Waddell and Conyngham arrived to provide damage control and relief to Stark's crew. Also, the Pentagon said that an Iranian helicopter had joined a Saudi Arabian vessel in rescue operations.
Stark arrived at Bahrain the following day, 18 May 1987. There she was temporarily repaired by the destroyer tender USS Acadia before setting a course for Mayport Naval Station, Florida, the ship's home port. A court of inquiry under Rear Admiral Grant Sharp was formed to investigate the incident and later Captain Brindel was recommended for court-martial but was ultimately only reprimanded. It was found that Stark was 2 miles (3.2 km) outside the exclusion zone and had not violated neutrality as the Iraqis claimed. Iraq apologized, and Saddam Hussein said that the pilot mistook Stark for an Iranian tanker. American officials claimed that the Iraqi jet's pilot was not acting under orders from his government and that he was later executed. This has been disputed, as an Iraqi Air Force officer later stated that the pilot was not punished and that he was still alive.
Iranian Prime Minister Mir Hossein Mousavi called it a "divine blessing" and reiterated the standard Iranian view that the Persian Gulf "is not a safe place for the superpowers and it is in their interest not to enter this quicksand". Iraq Foreign Ministry spokesman said Iraq would never intentionally attack any target in the Gulf unless it was Iranian, and laid the blame on Iran.
Washington used the incident to pressure Iran, which it later blamed for the whole situation. President Reagan said "We've never considered them hostile at all", and "the villain in the piece is Iran".
The Joint Chiefs of Staff investigation into the incident recommended that Iraq be held accountable, a finding the government of Iraq eventually complied with.
Captain Brindel was relieved of duty and retired as a Commander for not defending his ship and Tactical Action Officer Lieutenant Basil E. Moncrief resigned.
Claims
On 21 June 2011, an agreement was reached between the governments of the United States and Iraq regarding claims of United States citizens against the regime of Saddam Hussein. The Iraqi government established a fund of $400 million to compensate prisoners of war and hostages in the Persian Gulf War, and those killed or injured in the 1987 attack on Stark. The U.S. Department of State was to establish a mechanism to process applications for compensation.
--- ---
...