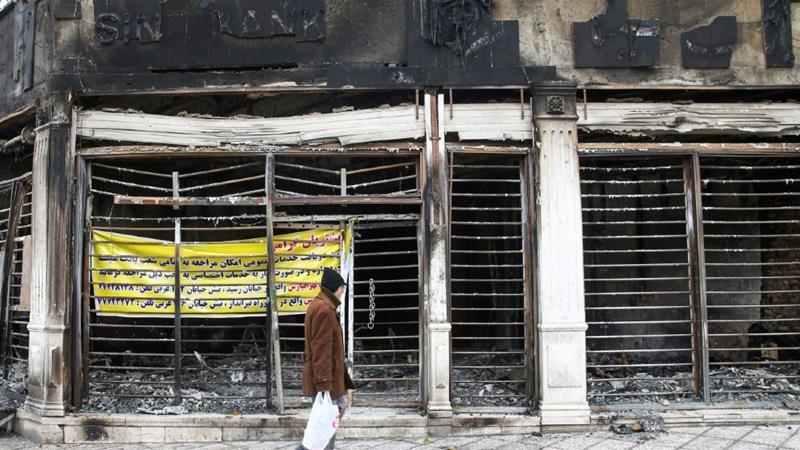 For the first time, senior Iranian official provides casualty figures during unrest last year.
The head of an Iranian parliamentary committee has said 230 people were killed during the November protests triggered by a spike in petrol prices - the first time an official has given an overall death toll for the unrest.
"During these events 230 people were killed, six of whom were official agents and security forces," Mojtaba Zolnour, head of the parliament's national security and foreign affairs committee, was quoted as saying by state news agency IRNA on Monday.
"Twenty percent of them were forces keeping order and peace," he said, adding that they included "the police, security and intelligence forces, and the Basij" militia, some of which are not under government control and considered unofficial.
According to Zolnour, 2,000 people and 5,000 officers deployed to ensure order were among those wounded,
Protests erupted on November 15 in reponse to an abrupt decision by authorities to increase petrol costs by up 50 percent and ration supplies, with residents already grappling with surging inflation and a currency crisis calling for a reversal of the measures.
While initially demonstrators took to the streets in a handful of cities, discontent quickly spread to at least 100 urban centres across the country in the worst wave of unrest in years.
Images of demonstrators torching petrol pumps and looting shops circulated on social media before authorities imposed an unprecedented, near-total nationwide internet shutdown that lasted for a week.
The government tried to reassure the public the move was meant to help those most in need, saying it would redistribute the proceeds through montly cash handouts to poor families.
The country's economy has been choked by crippling sanctions reimposed by the United States in 2018 after Washington unilaterally pulled out of a landmark nuclear deal signed between Tehran and world powers three years earlier.
Amnesty International said in December at least 304 people were killed, accusing Iranian security forces of "massacring" unarmed demonstrators. Last month, the London-based rights group released details of what it described as "killing spree", saying that more than 220 of the recorded deaths took place over just two days on November 16 and 17.
"New and extensive research has again concluded that the security forces' use of lethal force against the vast majority of those killed was unlawful," Amnesty said on May 20.
A group of independent United Nations rights experts said in December that 400, including at least 12 children, could have been killed based on unconfirmed reports. The US claimed that more than 1,000 were killed in the violence.
Iranian officials repetitively rejected human rights groups and foreign media's estimates of the number of people killed during the protests, labelling them as "lies".
Zolnour said seven percent of the 230 were "those killed in direct confrontations with security forces", calling them mostly "rioters armed with semi-automatic weapons and machine guns".
He added that 26 percent "were not among the rioters and killed over unknown reasons" such as "being shot from seven metres to the heart or to the temple from three metres away".
Zolnour insisted the security forces were too far away from the protesters to have done this.
"A high percentage were killed by bullets that are not used" in Iranian standard-issue weapons, he said.
Of the remainder, 16 percent died while attacking military bases and police stations, and 31 percent at public places such as shopping centres, banks and fuel stations.
Zolnour alleged that those behind the violence had aimed to use the unrest to "overthrow" the system.
SOURCE: Al Jazeera and news agencies