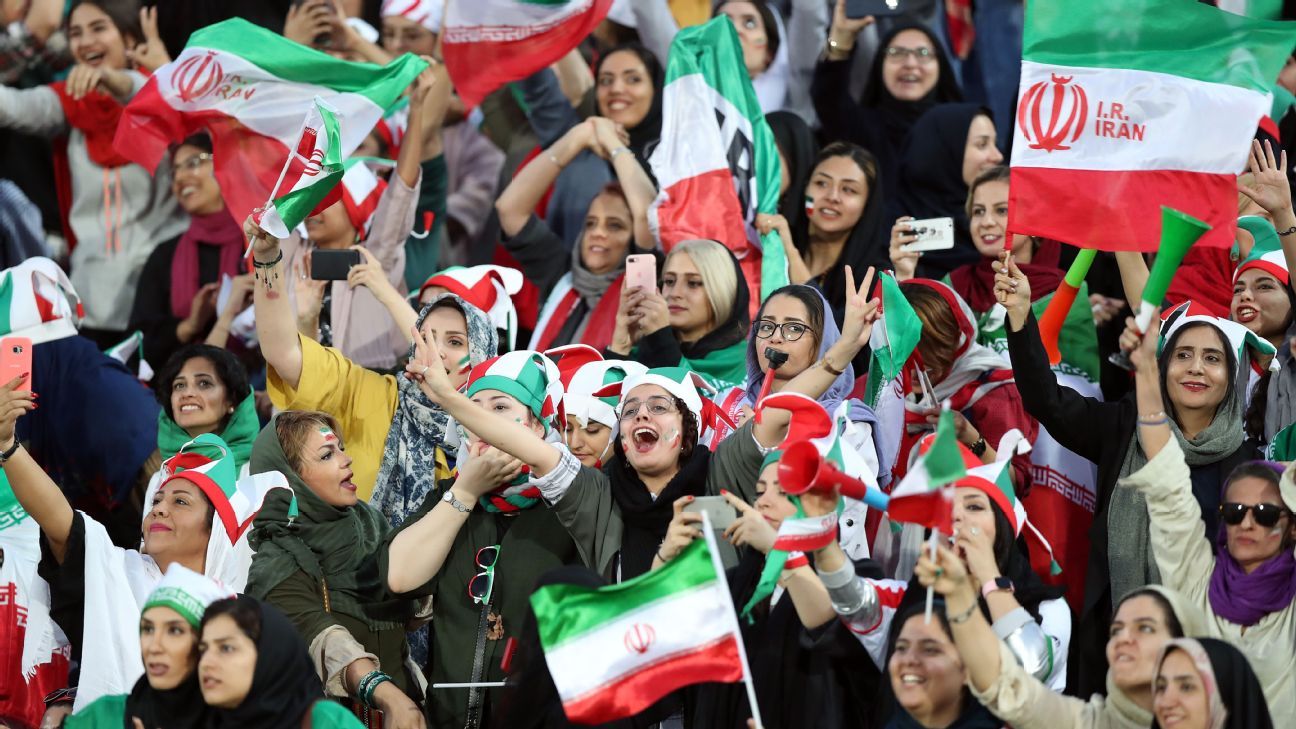 ESPN
Facebook
Twitter
Facebook Messenger
Pinterest
Email
print
Maryam Shojaei, who mounted a campaign -- first anonymously and later publicly -- that led to Iran allowing women to attend men's soccer matches, is being honored with the Stuart Scott ENSPIRE Award, ESPN announced Tuesday.
The award is part of the Sports Humanitarian Awards, which typically are handed out during the week of the ESPYS. This year, the awards will be given out on various ESPN programs.
Women had been banned from watching men's games since shortly after the 1979 Islamic revolution, with only a few exceptions made for small groups on rare occasions. Shojaei, whose brother Masoud Shojaei is the captain of the men's national team, initially criticized the ban on social media anonymously. She then started a five-year battle to allow women to see matches live in her country.
Shojaei attended the FIFA Women's World Cup in Canada in 2015, displaying a banner but keeping her identity hidden. By 2018, she had helped create the #NoBan4Women petition, and she went to the 2019 FIFA Women's World Cup in Russia, where her banners were confiscated but she revealed her identity.
She kept pushing FIFA to uphold its policies against gender discrimination, and eventually the soccer governing body sent a delegation to Iran, which resulted in women being allowed to attend men's international matches.
In October 2019, women were allowed to watch the Iranian men's national team beat Cambodia 14-0 in Tehran in a World Cup qualifier. The initial lot of 3,500 tickets for women sold out almost immediately, and an additional 1,100 were released -- about 5% of the total tickets in the stadium.
FIFA president Gianni Infantino has urged Iranian authorities to open up stadiums to women for domestic league games, not just World Cup qualifiers.
"This is a very positive step forward, and one which FIFA, and especially Iranian girls and women, have been eagerly waiting for," FIFA said in a statement in October 2019. "The passion, joy and enthusiasm they showed today was remarkable to see and encourages us even more to continue the path we have started. History teaches us that progress comes in stages and this is just the beginning of a journey.
"Consequently, FIFA now looks more than ever towards a future when ALL girls and women wishing to attend football matches in Iran will be free to do so, and in a safe environment.
"There can be no stopping or turning back now."
The ESPYS will be televised on ESPN on June 21 at 9 p.m. ET. The Stuart Scott ENSPIRE Award is sponsored by Bristol-Myers Squibb.
---Maryam Shojaei, who blazed trail for women to watch men's soccer, is honored with Stuart Scott ENSPIRE Award ---
...