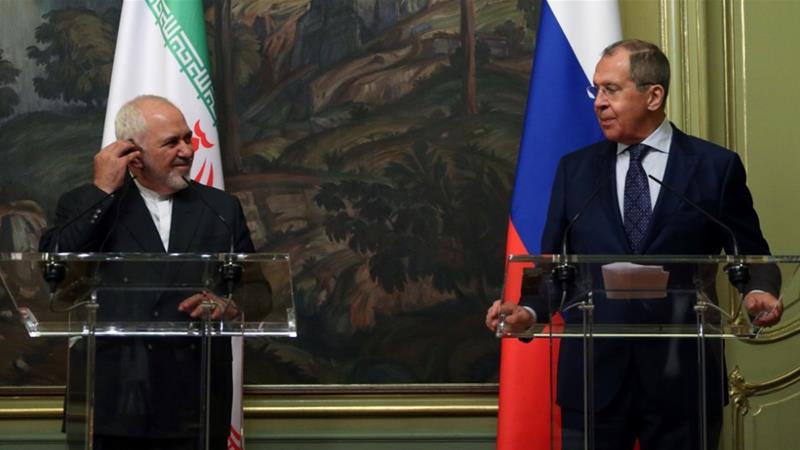 Lavrov says, after meeting Zarif, Russia will do 'everything' to preserve nuclear deal between Iran and world powers.
Zarif described developments around the Iranian nuclear deal as 'very dangerous' [Russian foreign ministry handout/AFP]

* * * Russia has promised to stand by its ally, Iran, amid tensions over Tehran's nuclear programme as Foreign Minister Sergey Lavrov met his Iranian counterpart Javad Zarif in Moscow.
Lavrov said on Tuesday Russia would do "everything" to preserve a 2015 nuclear deal between Iran and world powers that started to unravel two years ago when the US renounced it and reimposed sanctions on Tehran.
"We will be doing everything so that no one can destroy these agreements," Lavrov told reporters after face-to-face talks with Zarif. "Washington has no right to punish Iran."
He said Russia would firmly oppose any "attempts to use this situation in order to manipulate the (United Nations) Security Council and to promote an anti-Iranian agenda".
On his part, Zarif described developments around the Iranian nuclear deal - formally known as the Joint Comprehensive Plan of Action - as "very dangerous".
Abandoned commitments
Iran committed under the deal to curb its nuclear activities in exchange for sanctions relief and other benefits.
But the Islamic Republic has slowly abandoned its commitments after US President Donald Trump's decision to withdraw from the deal.
Iran's stockpile of enriched uranium is currently almost eight times the limit fixed in the accord, according to an assessment by the UN's nuclear watchdog, the International Atomic Energy Agency (IAEA).
However, the level of enrichment is still far below what would be needed for a nuclear weapon.
On Monday, the IAEA called on Iran to allow prompt access to two sites where past nuclear activity may have occurred.
SOURCE: News agencies