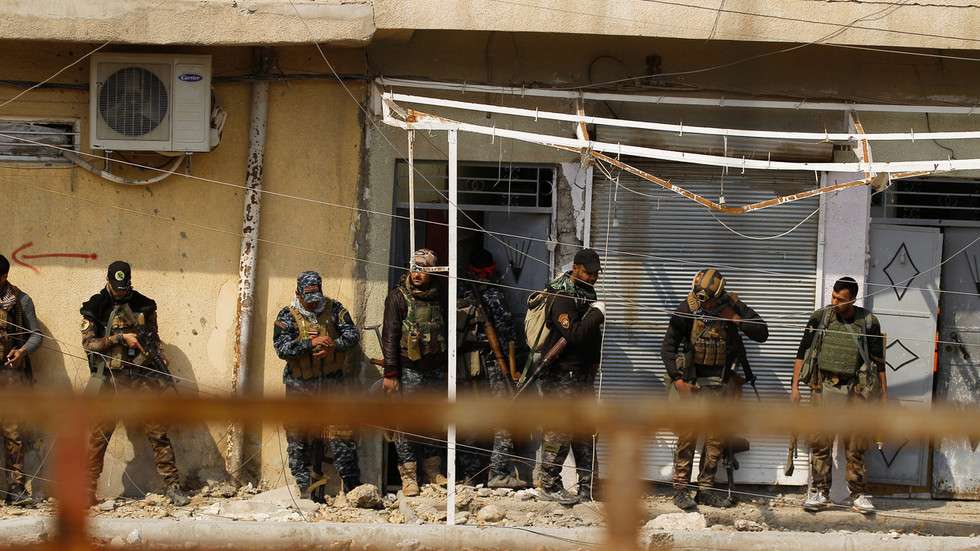 Iraqi security forces have raided the headquarters of Kataib Hezbollah, capturing several leaders of the militia at the heart of US-Iranian conflict early this year. The US coalition rushed to distance itself from the operation.
Special forces from the Counter Terrorism Service carried out the raid in the early hours of Friday local time, at a base south of Baghdad, reportedly arresting nearly two dozen militiamen and several commanders.
Their fate remains unclear, however, as government officials insist they are in the custody of security services, while paramilitary sources claim all those detained have since been handed over to the Popular Mobilization Forces (PMF).
Adding more confusion, an Iraqi official initially told Reuters that at least three of the group's detained commanders – including one Iranian national – had been transferred over to the US military. However, a spokesman for the US-led coalition in Iraq later denied this report – as well as any American involvement in the controversial operation.
According to @AP 13 members of the group have been arrested. Kadhimi has been under pressure to reign in Iranian proxies who have continued to attack US targets. It’s inconceivable that he would have launched tonight’s operation without the firm backing of the US.
— Ranj Alaaldin (@RanjAlaaldin) June 25, 2020
The raid appears to have been ordered by Iraqi Prime Minister Mustafa Al-Kadhimi, who took office last month over the vocal objections of Kataib Hezbollah and other PMF militias.
Kataib Hezbollah has been at the center of tensions between Washington and Tehran over the ongoing US presence in Iraq. The US has accused the Shia militia of repeated rocket attacks against bases housing US personnel, going so far as to bomb Kataib positions on multiple occasions in reprisal.
One such attack, in December 2019, prompted the militants to besiege the US Embassy in Baghdad. In response, US President Donald Trump ordered a drone strike against the PMF leadership on January 2 – killing Qassem Soleimani, the commander of the elite Quds Force of Iran’s Islamic Revolutionary Guard Corps (IRGC), in the process.
Iran responded by launching missiles against several US bases in Iraq, inflicting massive material damage but not killing any US or Iraqi troops. It later emerged that Washington and Baghdad received a warning ahead of the attacks.
Since then, US-Iranian tensions have simmered, but never escalated to the point of open warfare. Friday’s raid could ratchet them up again, however.