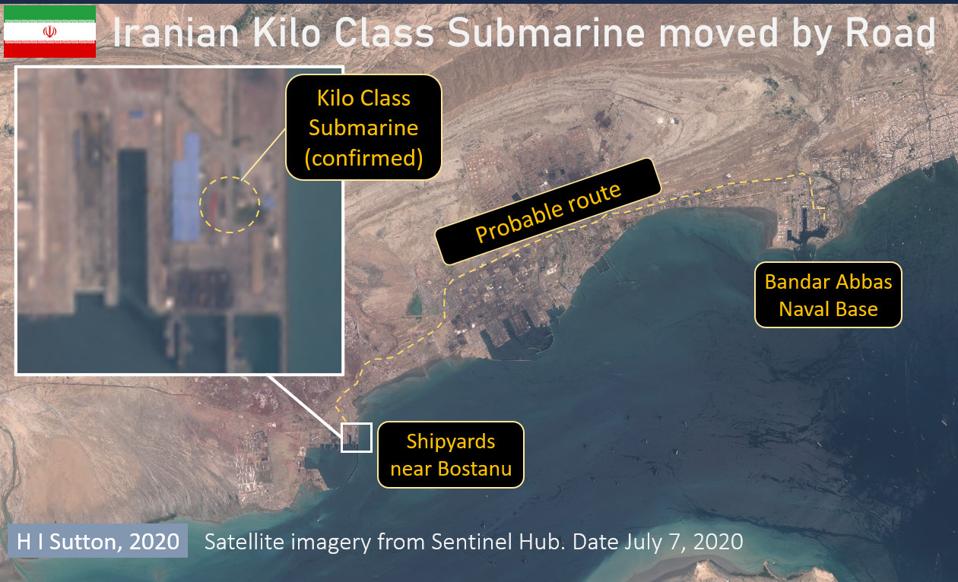 H I SuttonContributor
Aerospace & Defense
I cover the changing world of underwater warfare.
Iran’s three Kilo Class submarines are the most potent warships in their navy. A video has surfaced on social media showing one of them being transported by road. With the serviceability of the fleet in question, it may be revealing. The move does not appear to be routine. The implication is that at least one of the boats is not currently seaworthy.
The footage shows the Project 877 Kilo Class submarine on a special low-loader. Although the video is undated, it appears current. It has been picked up by Iranian-language media outlets such as the Jamejam Daily, after it was posted on social media. The description being passed around says that it is on its way to (or in) Bandar Abbas, the main naval base in Iran. This is the base for the Iranian Navy’s three Kilos, plus most major warships and midget submarines.
Iran received the submarines from Russia in the early 1990s. They are currently the largest and most potent submarines in the Persian Gulf, provided no U.S. Navy or Royal Navy boats are there. These diesel-electric boats are capable, but increasingly dated. They can carry heavyweight torpedoes and likely have a modest anti-submarine capability.
They have been overhauled and maintained locally. And they may have received some capability enhancements over the years. Iran has had difficulty maintaining some original features however, such as the anechoic coating. These are rubber tiles which reduce the noise signature, an important factor in submarine stealth. The submarine in the video appears to be missing some of these tiles, which normally cover the outside of the boat.
While moving a submarine by road isn’t unique, it is unusual. It is more often seen when boats are moved inshore to become museum ships, or during construction. The Kilo Class is 230 feet long, 32 feet wide and have a displacement (in water) of around 3,000 tons. So they are not easy to move by road. It strongly suggests that the boat is not capable of being moved on the water, whether under its own power or being towed. Even for routine maintenance they are normally moved on the water. Iran has a dry dock in Bandar Abbas where the Kilo Class submarines are routinely overhauled.
The starting point for the journey is believed to be a shipyard near Bostanu. Defense analyst Joseph Dempsey of the International Institute for Strategic Studies (IISS) has used satellite imagery to identify a Kilo Class submarine there from February-March this year. It is likely that boat.
The Kilo class submarine at Bostanu appears to have been pictured in an Iranian government press release from May 29, although no further details were given.
The shipyard is about 15 miles west along the coast from Bandar Abbas and is connected by good roads. Work on submarines and other warships has taken place there. And it is near where Iran’s target barge designed to look like a U.S. Navy aircraft carrier was built.
The story behind this move hasn't yet come out. And maybe it won't. But defense analysts will be watching closely to try to figure out what it tells us about Iranian Navy readiness.
H I Sutton
Using OSINT (Open Source Intelligence) to get to the stories first. Author of several books on Submarines, Special Forces and Narco subs. I mostly write about submarines and the world's more secretive navies.
---Iran’s three Kilo Class submarines are the most potent warships in their Navy. Today a video has emerged on social media showing one of them being transported by road, which is unusual. What can it tell us about the Iranian Navy's readiness? ---
...

english.farsnews.com 29/04/2015 Military
TEHRAN (FNA)- An informed source in Iran confirmed earlier reports that the Iranian Navy has seized a US ship in the Persian Gulf, adding that the shi...View Details»