Epic Fail: US economy has worst-ever quarter with 32.9% dive in Q2 GDP 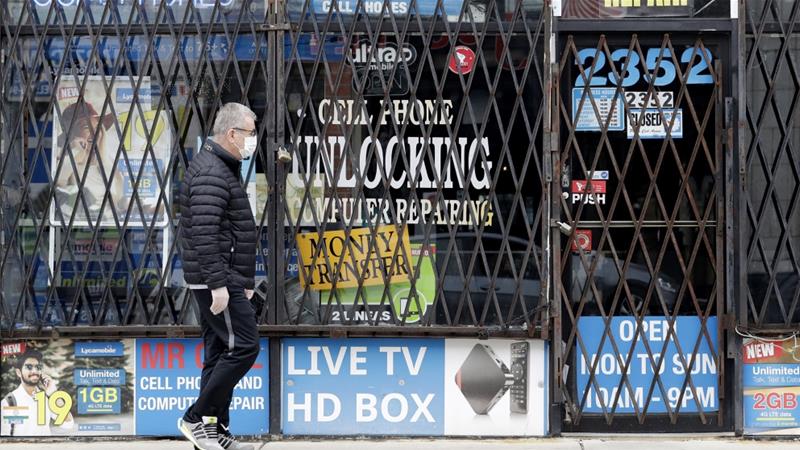 Annualised quarterly plunge was driven by coronavirus lockdowns that ground US economic activity to a halt.
We knew the United States economy fell off a cliff in the second quarter. On Thursday, we learned just how steep that dive was.
The US economy plunged a staggering 32.9 percent from April through June on an annualised basis, the Bureau of Economic Analysis reported - by far the worst contraction on record.
In the first quarter of this year, when the US officially entered recession in February, the economy shrank 5 percent from the same period a year ago.
Before coronavirus lockdowns swept the nation in March, the worst reading on US gross domestic product (GDP) - which measures the value of all the goods and services produced in the economy - was recorded in 1950, when the US economy shrank 10 percent in the first quarter.
A sharp contraction in consumer spending was the main driver pushing the economy into its second-quarter chasm. Before the pandemic, consumer spending drove two-thirds of US economic activity.
A plunge in exports, inventories, business and residential investment, as well as state and local government spending, also contributed to the historic weakness.
Though the GDP number came in at the higher end of economists' estimates, it was widely expected to shatter previous records.
Economic activity in the US and around the world ground to a halt in March as measures designed to contain the spread of COVID-19 halted trade, forced businesses to shutter and consumers to shelter in place.
As tens of millions of Americans lost their jobs, the Federal Reserve stepped up with trillions of dollars worth of support to keep credit flowing to businesses and households, while Congress splashed out some $3 trillion in virus relief aid spending.
Though the economy started to crawl out of its pandemic hole with the easing of lockdown restrictions in May and June, a surge of infections in some US states has led officials to pause and in some cases, reverse those rollbacks.
There was more evidence on Thursday that the labour market recovery is stalling as the outlook grows more uncertain.
Some 1.434 million Americans filed for state unemployment benefits in the week ending July 25, the Bureau of Labor Statistics reported, marking the second consecutive rise in weekly jobless claims since the labour market bottomed out in March.
Roughly 30 million Americans are collecting unemployment benefits from state and federal programmes - but their income is set to tumble dramatically. The $600 federal weekly top-up to state benefits that was included the round of virus relief Congress passed in March effectively ended last week.
And Republicans and Democrats in Congress cannot agree yet on the way forward.
Democrats would like to see the $600 top-up extended through to January of next year. Republicans want to see it slashed to $200 a week through September and then have states bring the combined state and federal payment to 70 percent of prior wages with the top-up capped at $500 a week.
Federal Reserve Chairman Jerome Powell noted during a press conference on Wednesday that the rise in joblessness has been "especially severe for lower-wage workers, for women, and for African Americans and Hispanics".
The Fed chair also said that data is showing that on balance, the pace of the recovery appears to be slowing and that whatever path the economy takes will depend "to a very high extent on the course of the virus".
SOURCE: Al Jazeera News