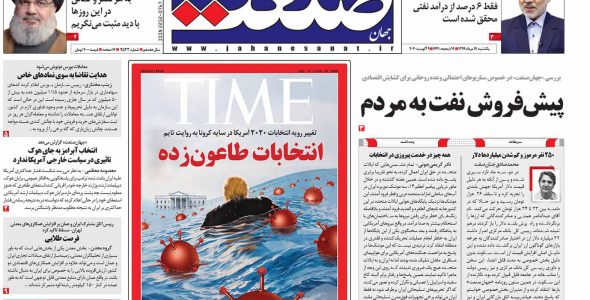 
Jahane Sanat began publishing in 2004 and was mainly focused on business news
‘The administration resorted to secrecy for political and security reasons’
TEHRAN, Iran: Iran shut down a newspaper on Monday after it published remarks by an expert who said the official figures on coronavirus cases and deaths in the country account for only 5 percent of the real toll.
Mohammad Reza Sadi, the editor-in-chief of Jahane Sanat, told the official IRNA news agency that authorities closed his newspaper, which began publishing in 2004 and was mainly focused on business news.
On Sunday, the daily quoted Mohammad Reza Mahboobfar, an epidemiologist the paper said had worked on the government’s anti-coronavirus campaign, as saying the true number of cases and deaths in Iran could be 20 times the number reported by the Health Ministry.
He also said the virus was detected in Iran a month earlier than Feb. 19, when authorities announced the first confirmed case. He said they held up the announcement until after the commemorations of the anniversary of the 1979 Islamic Revolution and parliamentary elections earlier that month.
“The administration resorted to secrecy for political and security reasons,” he said, and only provided “engineered statistics” to the public.
He also criticized testing efforts and warned of a renewed outbreak next month as universities hold entrance exams and people mark major Shiite holidays.
Iran’s Health Ministry has reported a total of nearly 330,000 cases and 18,616 deaths, including 189 fatalities in the last 24 hours.
Authorities in Iran have come under heavy criticism since the start of the pandemic because of their reluctance to impose the kind of sweeping restrictions seen elsewhere in the region. Iran is home to the deadliest outbreak in the Middle East.