During the last few months, crypto proponents have focused their attention on Iran. The Iranian President Hassan Rouhani initiated a new mining strategy last May, and the government-licensed 14 bitcoin mining farms in July. According to the Chinese mining operation Lubian, it claims to operate one of these regulated bitcoin mining farms in the oil-rich nation.
The Cambridge Bitcoin Electricity Consumption Index or “Bitcoin Mining Map” attempts to visualize the geographic distribution of global Bitcoin hashrate. Iran is the sixth most powerful country in terms of global hashrate.
Of course, China consumes a vast amount of the global hashrate and Chinese miners also have a strong relationship with the oil-rich nation of Iran. Back in April 2019, news.Bitcoin.com reported on Chinese miners migrating to Iran for cheaper electricity rates. At that time, it was difficult for the bitcoin miner, Liu Feng, to get his ASIC mining rigs into the country. However, when miners got into Iran, they had access to extremely affordable electric prices ($0.006 per kilowatt-hour).
However, the Iranian government caught wind of these unlicensed operations when certain subsidized organizations like mosques were caught mining bitcoin with near-free electricity.
The government then mandated licensure for mining farms and the electric rate was upped to fluctuating export prices depending on the season. More recently, President Hassan Rouhani initiated a bitcoin mining strategy and the government is focused on bolstering the industry.
The Chinese mining operation Lubian.com recently told the financial columnist Vincent He that the company operates one of the largest regulated farms in Iran.
Lubian’s cofounder Liu Ping detailed that it has a partnership with a power facility in Iran and the investors are both Iranian and Chinese. Power companies in Iran are now allowed to house bitcoin mining operations. Unlike the Chinese miner Liu Feng who had an awful time dealing with customs getting ASIC mining rigs across the border, Liu Ping said his firm has no problems with clearance.
“We have our own customs clearance channels as we have the experience of establishing the logistics company,” Liu Ping stated. “And we have good local resources in Iran, and we have maintained good relations with the Ministry of energy, the Ministry of foreign affairs, and even the army in Iran,” the miner added.
Lubian is a relatively new mining operation and more recently it was the sixth most powerful mining operation in terms of hashrate. Today, Lubian has around 3% of the global hashrate or around 3.86 exahash per second (EH/s).
This puts the firm in the eleventh position among a number of mining pools and giant operations like Poolin, F2pool, and Antpool. Liu Ping said that the Iranian farm is housed in containers within the power plant’s property lines.
The Chinese miner also said the operation pays the power company in shares of bitcoin (BTC), as well as traditional means of payment.
“Compared with traditional industries, crypto mining is a profitable business,” Liu Ping concluded. “Apart from the mining pool business, at present, there is no other crypto financial service business conducted by Lubain.com. At present, their purpose is only mining and accumulating Bitcoin.”
At the time of publication, the BTC hashrate has been high at around 135 EH/s and there are 18 mining operations mining the BTC chain.

China says U.S. has no right to extend arms embargo on Iran ... 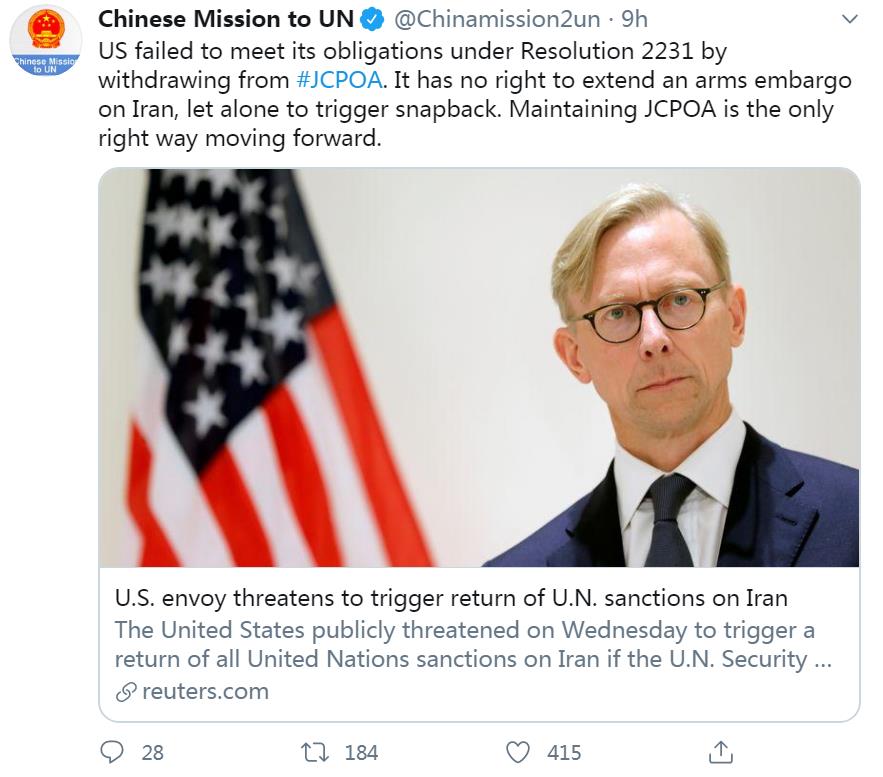 news.cgtn.com 16/05/2020 Politics
The Chinese Mission to the United Nations said on Thursday that Washington has no right to extend a UN arms embargo on Tehran after the United States ...View Details»