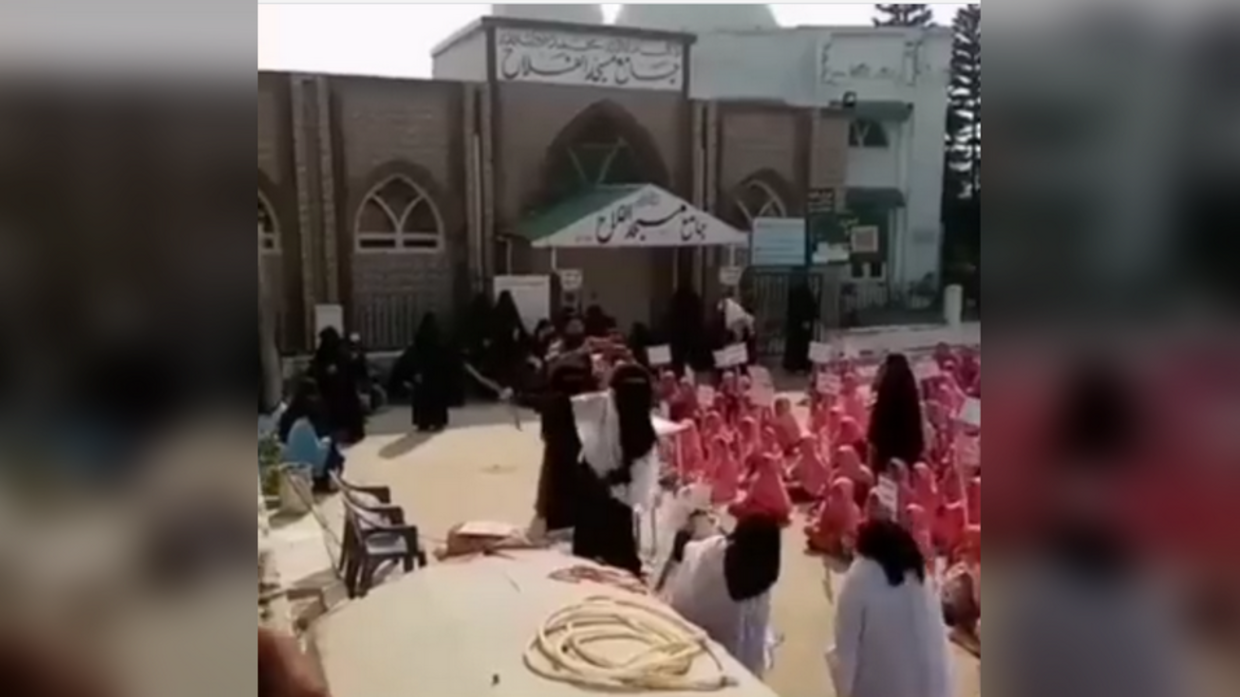 A girls’ religious school in Islamabad staged a mock beheading in front of its young students as a cleric preached that Muslims would exact vengeance on France – and on the West in general – for “insulting” Prophet Mohammed.
A woman in full face veil uses a scimitar to behead an effigy in front of hundreds of assembled students, many holding signs sporting protest slogans, in video posted to the official Facebook account of Jamia Syeda Hafsa, a Pakistani girls’ seminary, last week.
Religious school in Pakistan is teaching children how to behead people who insult Prophet Muhammad. They threaten #France and antagonize cartoonists. pic.twitter.com/BA1tjNvzkB
— Ex-Muslims of North America (@ExmuslimsOrg) November 1, 2020
https://t.co/BA1tjNvzkB
The disturbing scene and excerpts of a fiery sermon that accompanied it have since been picked up by Muslim-skeptical English language outlets, at least one of which claimed the effigy is of French President Emmanuel Macron, though there is no evidence in the video that this is the case. Macron has come under fire from Muslims around the world for his government’s recent efforts to crack down on Islamic extremism following the beheading of history teacher Samuel Paty last month by a Chechen Muslim immigrant.
Video of the beheading is set to a song that lyrically vows to “grind into dust” those who draw the Prophet Mohammed and declares beheading to be the only fitting punishment for insulting him. The grisly pageant was accompanied by a sermon in which the female cleric vowed vengeance on the enemies of Islam, especially France.
“So far only one of your brethren has gone to hell,” the cleric declared, adding that “we will never stop until we exact vengeance for your insult” – presumably the obscene cartoon drawing of the Prophet that Paty reportedly showed his class as part of a lesson on free speech.
“You started this, but we will finish it,” she continued, asking if it was “possible” for France to “insult our prophet and retain the glory of Paris.”
Nor did she spare France’s allies, vowing a larger revenge in what seemed to be retaliation for the ongoing ‘war on terror’ that has left Syria, Iraq, Libya, and Afghanistan in ruins. “Along with France, all enemies of Muslims will need to understand the flames you spread to us in the East will now reach you in the West,” the cleric said.
“If you let us be in peace you’ll be able to live in peace. Your peace is tied to ours,” she proclaimed.
While the effigy beheaded in Islamabad may not have been Macron, the French president has been enthusiastically “mutilated” in effigy elsewhere. A massive protest outside the French embassy in Dhaka included an effigy-burning, and a small group of Muslims burned photographs of the leader outside the French embassy in Moscow on Friday.
Macron’s crackdown on radical Islam has polarized Muslims and non-Muslims alike, with some feeling it’s too little, too late and others seeing it as an-all-out war on Muslims. The president acknowledged that caricatures of Mohammed like the one published by satirical outlet Charlie Hebdo in 2015 might be “shocking” but has vowed to protect freedom of speech in France – at least when it comes to displaying politically incorrect cartoons.
Despite its inflammatory content, the video apparently did not violate Facebook’s policy on inciting violence, even though it included a direct call for Muslims to “spill their blood” defending the honor of the Prophet.
--- ---...