Indigenous say ‘no thanks, no giving’ 400 years after Mayflower

‘National Day of Mourning’ for Native peoples in Plymouth comes as the United States begins to deal with its colonial legacy.
By
Creede Newton
26 Nov 2020
As the United States prepares to celebrate Thanksgiving on Thursday, the community where it first took place continues to grapple with the legacy of the arrival of the Mayflower, the ship that 400 years ago transported the English Pilgrims who celebrated the apocryphal first feast with members of the Wampanoag tribe.
But the modern telling of the US holiday is largely unverified and ignores a longer, bloodier history of conflict and colonisation, according to Native American organisers in Plymouth, Massachusetts, where Pilgrims first settled for a short time in 1620.
The United American Indians of New England (UAINE) has organised a “National Day of Mourning” on the fourth Thursday of November since 1970 to bring attention to the history of the Wampanoag – and Indigenous people across the US – who faced war, disease and ethnic cleansing with the arrival of European colonists.
“We Native people have no reason to celebrate the arrival of the Pilgrims. We want to educate people so that they understand the stories we all learned in school about the first Thanksgiving are nothing but lies”, Kisha James, who is Aquinnah Wampanoag and Lakota and an organiser with UAINE, said in a statement emailed to Al Jazeera.
The Wampanoag helped the Pilgrims survive after their 1620 arrival in North America. While often depicted as offering the newcomers goodwill, the tribe had been decimated in the preceding years by disease, likely introduced by European settlers in 1616, and also faced rival tribes. The striking of an agreement with Europeans was likely strategic: the Wampanoag needed an ally.
The treaty lasted around 50 years, before descendants of the Wampanoag leader Massasoit and colonists fought one of the bloodiest wars of the colonial period, amid increased tensions over colonist expansion into Indigenous lands and raids by local tribes.
Continued presence
The war ended with a crushing defeat and high death toll for the Wampanoag, who then largely disappeared from historical record after survivors were sold into slavery or indentured servitude.
But they remained and persisted, Herring Pond Wampanoag Tribe Chairwoman Melissa (Harding) Ferretti told Al Jazeera, in spite of “colonial and state policies intended to justify theft of our lands and to make us ‘disappear’”. 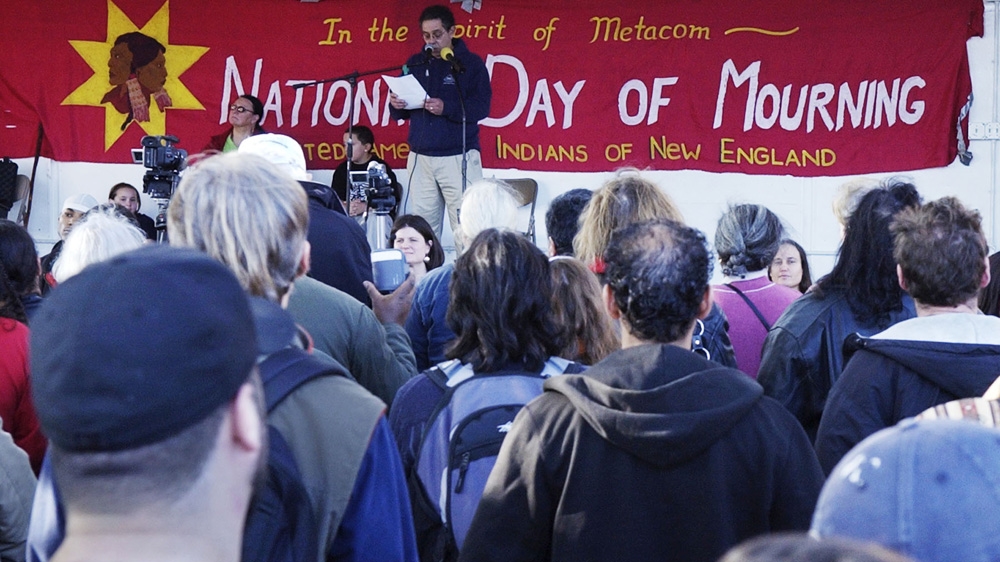 * * * That history “is what we think of right now, during Native American Heritage Month and during a holiday which has not acknowledged the complex truths of US history or New England’s history”, she continued.
There are three primary tribes left in the Wampanoag Nation: Mashpee, Aquinnah, and Manomet or Herring Pond, with several other groups in the process of reforming.
The Wampanoag have worked to fortify their language through educational initiatives and spread awareness of their culture among the 4,000-5,000 tribal members who live in present-day New England.
“As chairwoman of the Herring Pond Wampanoag Tribe, one of my main concerns is preserving tribal knowledge of our history and the experiences of our ancestors, which include their struggles to protect our homeland and to sustain the livelihood of our tribal community over the past 400 years,” Ferretti said.
Indigenous perspective
Plymouth 400, a local non-profit that prepared to commemorate the 400th anniversary of the Mayflower’s arrival for over a decade, has worked to incorporate that history.
It has “always been important to Plymouth 400 to not only tell the story of the Pilgrims, but also about the people that were impacted by this arrival of the Mayflower”, Brian Logan, communications director of the organisation, told Al Jazeera in an interview.
Plymouth 400 had originally planned a year-long series of events and commemorations to accompany its mission of scholarship, which was set to kick off last March. Most of these events were cancelled due to the coronavirus pandemic. 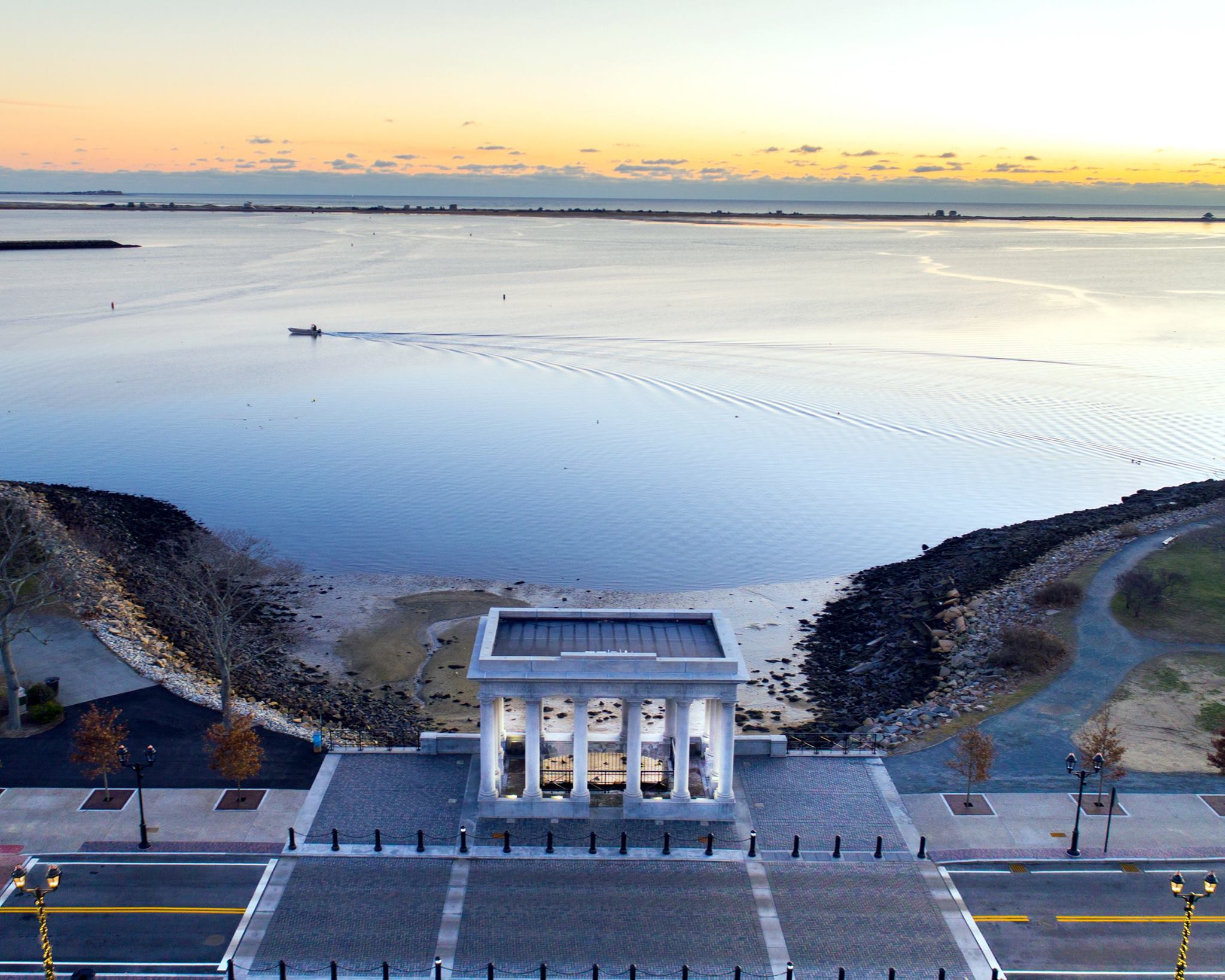 Plymouth Rock, on Plymouth Harbor in Massachusetts, is commemorated as the spot where the Mayflower landed in 1620 [Courtesy of Plymouth 400]

* * * But the organisation moved much of its work online, including exhibits detailing the history of the English and Indigenous people, beginning in 1616 with the disease that impacted the Wampanoag.
“It’s impossible to tell the story of the arrival of the Mayflower and the starting of Plymouth Colony without the perspective of those Indigenous people who were here, as the ship arrived,” Logan said.
Plymouth 400 launched its final exhibit this week, entitled the National Day of Mourning, in part to highlight perspectives of Indigenous peoples, Logan said.
Such perspectives received national attention during the Black Lives Matter protests earlier this year, as demonstrators toppled statues of historical figures who wronged Native Americans.
An increased awareness of this history is important to UAINE. But present-day struggles, including border issues, threats to tribal sovereignty and COVID-19, which is three and a half times more likely to infect Indigenous people, will also feature prominently in the solemn commemoration.
“Four hundred years after the arrival of the Mayflower, Indigenous people are still denied the respect and lands that are theirs by right,” James said. “Change is long past due … Today, we and many Indigenous people around the country say, ‘No thanks, no giving.’”
Source : Al Jazeera
--- ---
...

msn.com 28/11/2014 Culture
By Zach Goldhammer Within the turkey lies the tangled history of the world. OK, not quite. But not far off, either. ‘Turkey’ the bird is native to No...View Details»