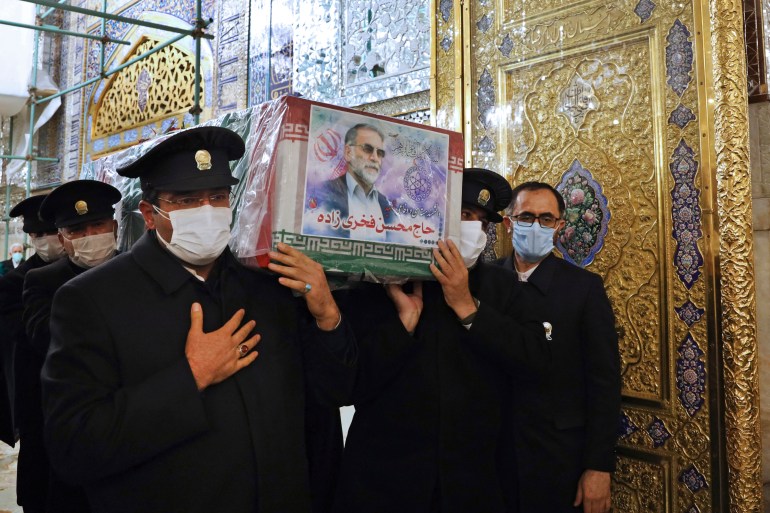 The weapon used in the assassination was placed on a pick-up truck and operated remotely via a video camera, official says.
The killing of Iran’s top nuclear scientist last month was carried out remotely with artificial intelligence and a machinegun equipped with a “satellite-controlled smart system”, a senior commander has said.
Iran has blamed Israel for the assassination of Mohsen Fakhrizadeh, who was seen by Western intelligence services as the mastermind of a covert Iranian programme to develop nuclear weapons capability. Tehran has long denied any such ambition.
“No terrorists were present on the ground … Martyr Fakhrizadeh was driving when a weapon using an advanced camera zoomed in on him,” Tasnim, a semiofficial news agency, quoted Ali Fadavi, deputy commander of Iran’s Islamic Revolutionary Guard Corps (IRGC), as saying at a ceremony on Sunday.
“The machinegun was placed on a pick-up truck and was controlled by a satellite.”
Israel has neither confirmed nor denied any involvement in the killing, and one of its officials suggested the Tasnim report on the method used was a face-saving move by Iran.
In the past, however, Israel has acknowledged pursuing clandestine intelligence-gathering operations against the nuclear programme of its archenemy Iran.
The Islamic Republic has given contradictory details of Fakhrizadeh’s death in a daytime November 27 ambush on his car on a highway near Tehran.
Speaking from Tehran, Al Jazeera’s Dorsa Jabbari said: “The sequence of events reported by commander Fadavi paints a picture that there were no actual physical people that carried out any component of this attack.”
“The details that we are hearing is that there was a gunfight and then a large explosion, all of which were carried out by remote control,” said Jabbari.
Analysts have said Fakhrizadeh’s killing exposed security gaps suggesting the Islamic Republic was vulnerable to further attacks.
“Some 13 shots were fired at martyr Fakhrizadeh with a machinegun controlled by satellite … During the operation, artificial intelligence and face recognition were used,” Fadavi said. “His wife, sitting 25 centimetres [10 inches] away from him in the same car, was not injured.”
Security gaps
Fadavi spoke after Iranian authorities said they had found “clues about the assassins”, though they have yet to announce any arrests. Shortly after Fakhrizadeh was killed witnesses told state television a truck exploded before a group of gunmen opened fire on his car.
Last week Ali Shamkhani, secretary of the Supreme National Security Council of Iran, said the killing was carried out with “electronic devices” with no people on the ground.
Yoav Galant, an Israeli security cabinet minister, said he was “not aware” of whether the remote-operated targeting technologies described in the Iranian accounts existed.
“What I see is a great deal of embarrassment on the Iranian side,” Galant, a former naval commando and deputy chief of Israel’s military, told Army Radio. “It would appear that those who were responsible for his [Fakhrizadeh’s] security are now coming up with reasons for not having fulfilled that mission.”
Fakhrizadeh, identified by Israel as a prime player in what it says is a continuing Iranian quest for a nuclear weapon, was the fifth Iranian nuclear scientist killed in targeted attacks since 2010 inside Iran, and the second slaying of a high-ranking Iranian official in 2020.
The commander of the IRGC’s elite Quds Force, Qassem Soleimani, was killed in an American drone strike in Baghdad in January. Tehran retaliated by firing missiles at the US military targets in Iraq.
--- ---
...