The Ancient Method That Keeps Afghanistan’s Grapes Fresh All Winter 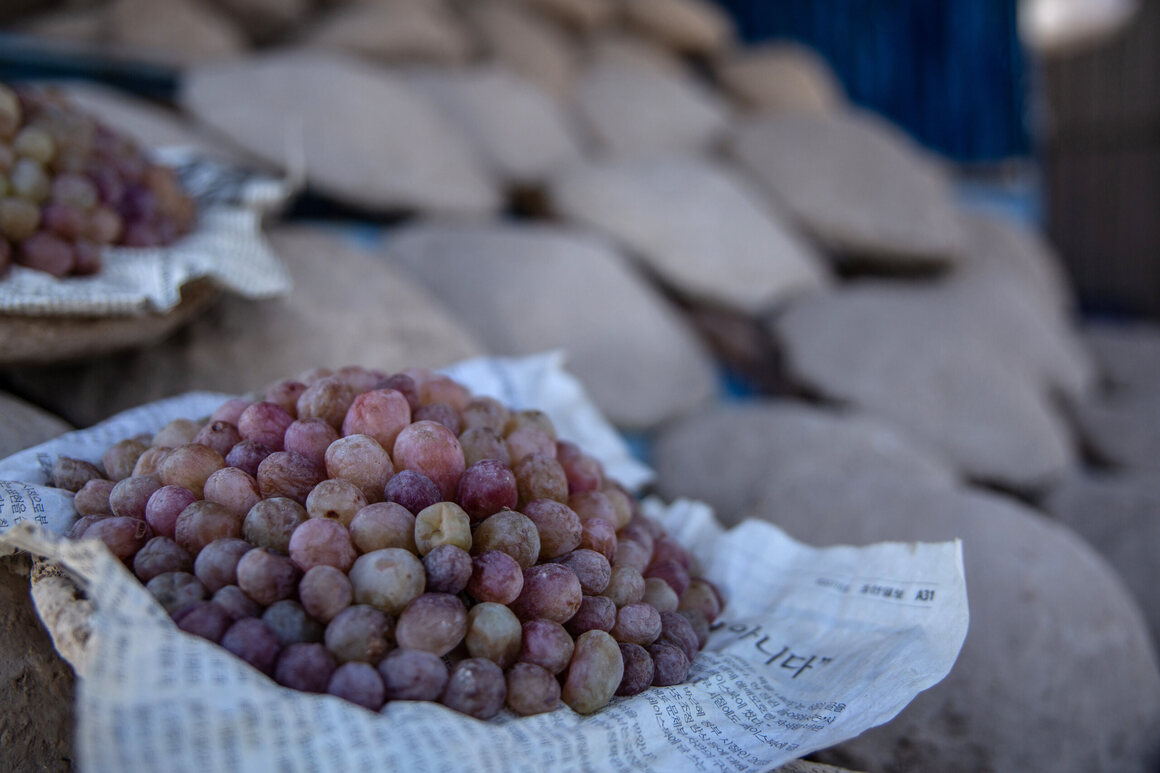 Kangina is simple but effective.
by Stefanie Glinski March 25, 2021
Sabsina, 11, holds a bowl of grapes that were placed inside months earlier. All photos by Stefanie Glinski for Gastro Obscura
Ziaulhaq Ahmadi sits on the floor of his small, one-story house, a brown, mud-walled compound at the end of a dusty alley in Aqa Saray. Surrounded by vineyards, fruit trees, and snow-capped mountains, the village is a half hour’s drive north of Kabul, Afghanistan’s capital. With great gentleness, he taps on what looks like a sealed mud bowl until it cracks open.
Ahmadi, 45, reveals a handful of grapes from inside the mud container. They have been there, he explains, since harvest time, nearly five months ago, and kept for Nowruz, the Persian New Year, which is celebrated on the spring equinox. After all these months, his grapes still look perfect, and are perfectly fresh.
A proud smile forms on his wrinkled face. “We use an ancient preservation technique,” he says. 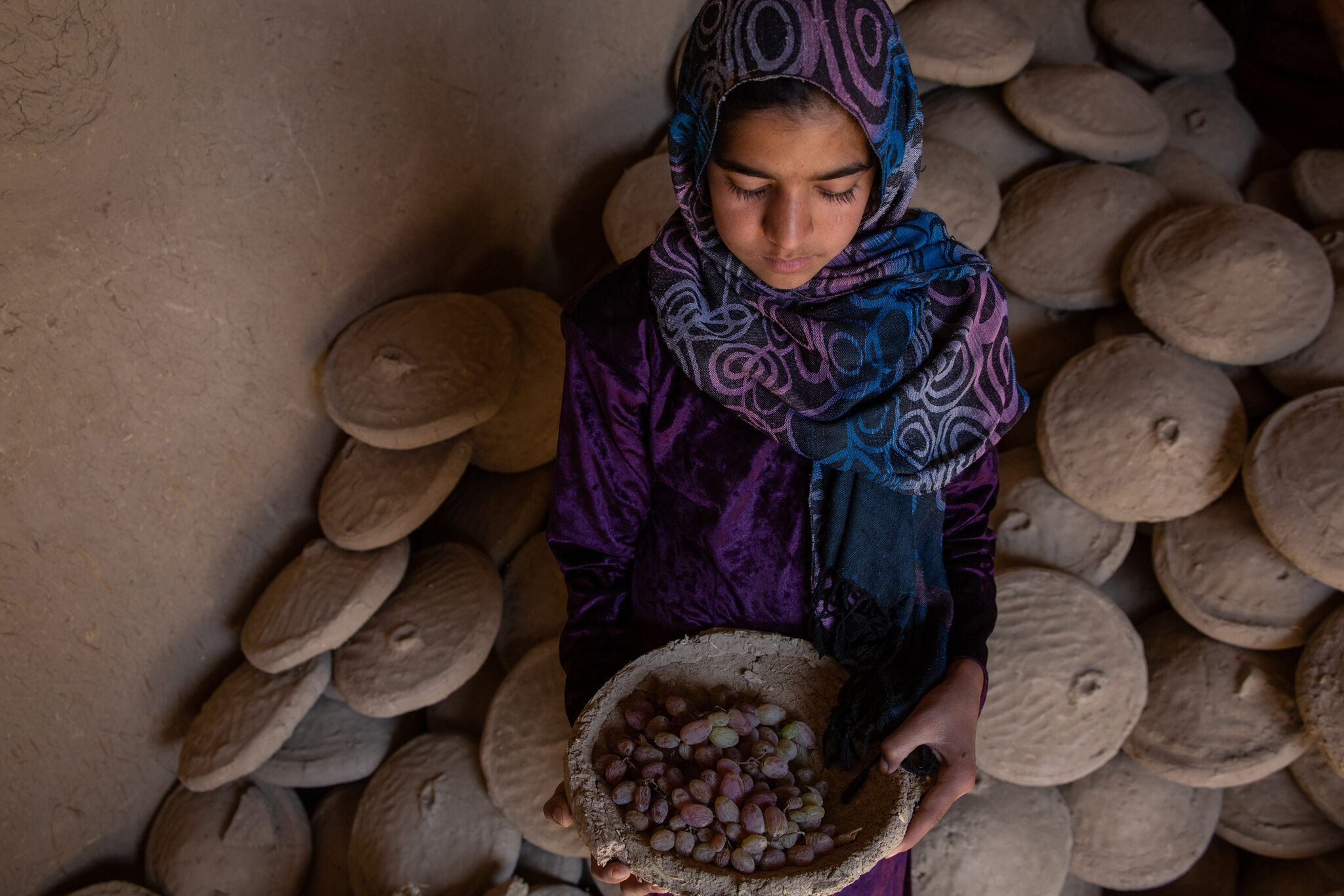 The grapes are stored for up to six months, kept fresh in airtight mud-straw containers.

* * * Afghans developed this method of food preservation, which uses mud-straw containers and is known as kangina, centuries ago in Afghanistan’s rural north. Thanks to the technique, people in remote communities who can’t afford imported produce are able to enjoy fresh fruit in winter months. But even in villages like Ahmadi’s, near the capital, the tradition is kept alive for good reason. “Have you ever seen another method that can keep grapes fresh for nearly half a year?” Ahmadi asks with a laugh.
Despite the practice’s generation-to-generation longevity, it has barely been documented or studied, explains Murtaza Azizi, Acting Director for Tourism at the Ministry of Culture and Information. But the clay-rich mud, whose seal keeps out air and moisture like a Tupperware or ziplock bag, protects the fruit from the winter cold, and works best for certain types of grapes.
“Usually, farmers who use kangina as storage choose the Taifi grape, which has thicker skin and is harvested at the end of the season,” explains Rajendra Aryal, the UN’s Food and Agriculture Organization’s Country Representative. 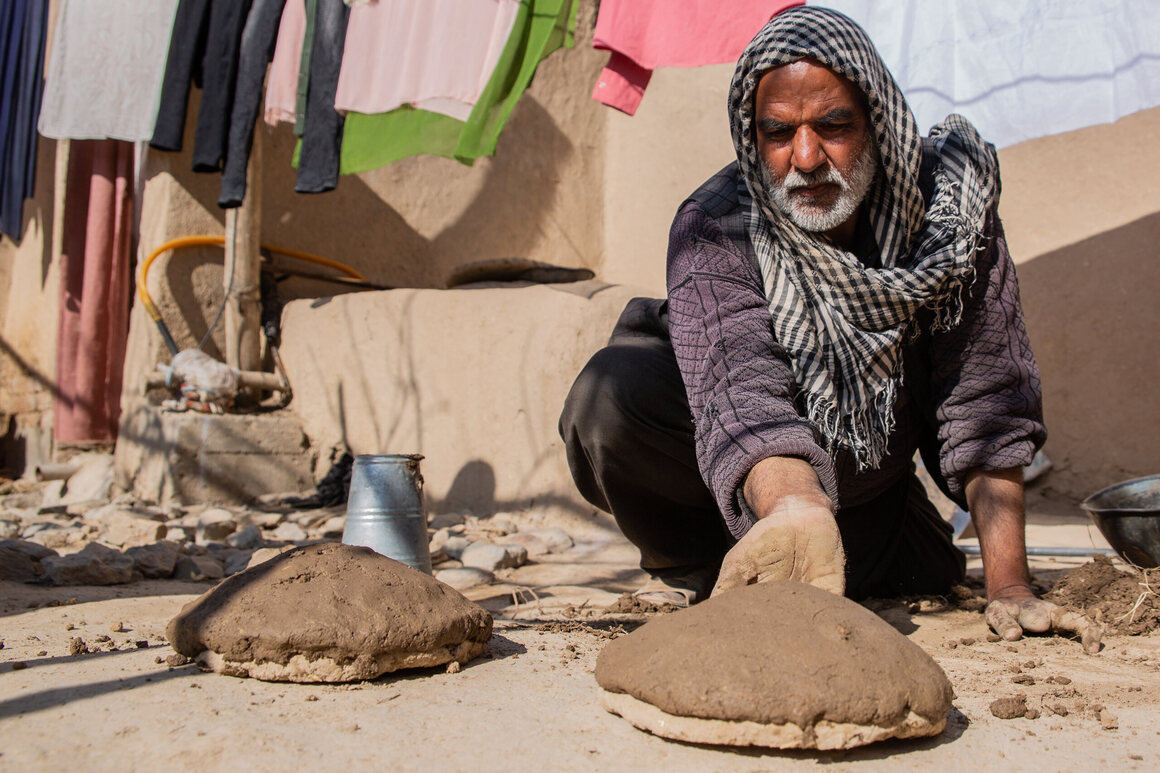 * * * “My father taught me how to preserve fruit when I was a teenager,” Ahmadi explains as he places the grapes back into the mud bowl, “and I passed it on to my own children.” He usually spends his days in his little roadside shop, selling grapes to passengers driving by.
With its fertile soil and dry-warm climate high up in the Hindu Kush mountains, Afghanistan is rich in fruit variety. At least 1.5 million tons are produced each year, according to the Ministry of Agriculture, Irrigation, and Livestock, but just one third of it is exported, and fresh fruit is served alongside most meals.
The South produces the majority of the country’s pomegranates and melons, while Ahmadi’s village in Central Afghanistan is home to apple and cherry trees, apricots, and vineyards. The area is especially famous for its grapes. 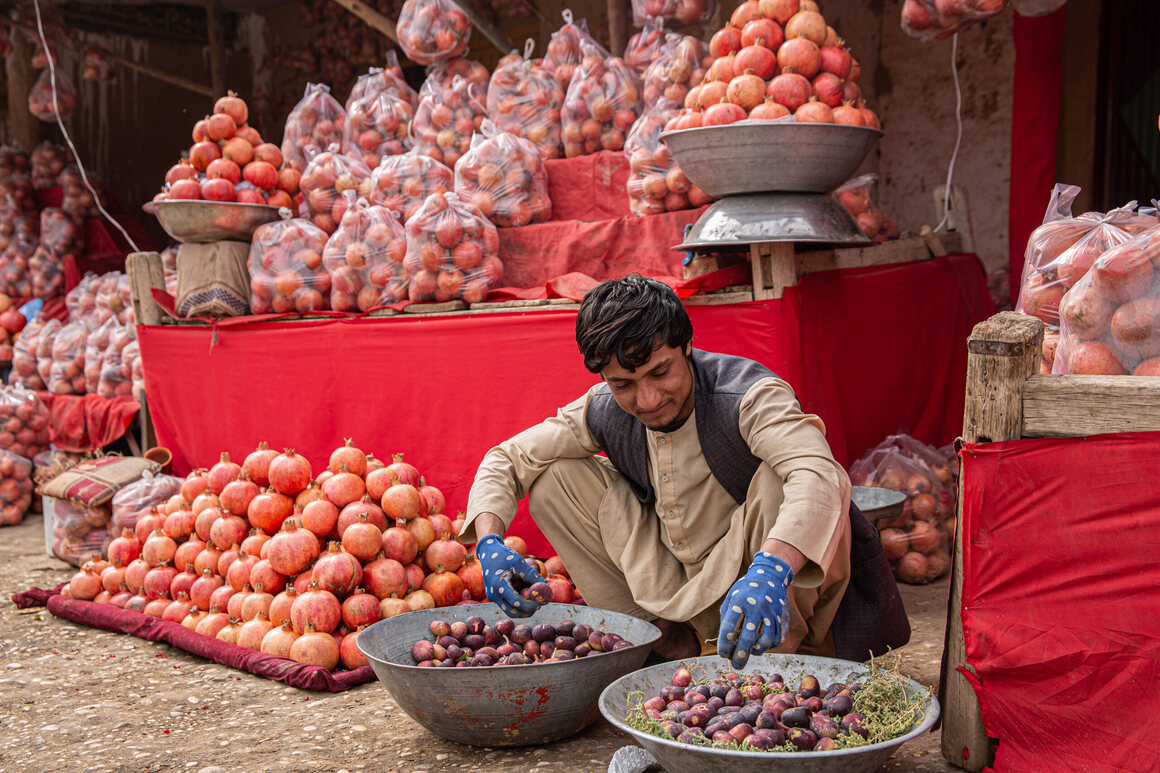 * * * Each season, when the lush fields turn red and yellow, Ahmadi buys 1,000 kilograms of grapes. About half of them he sells fresh; the other half he preserves using kangina and resells for a profit months later. “We use mud from the village, mix it with straw and water, and then form the bowls,” explains Ahmadi’s daughter Sabsina, 11, who, during the harvest, helps her father after school.
After laying the bowls in the sun for about five hours, they place the grapes in the dry bowls, which they seal with more mud and store in a dry, cool corner over the winter. Most families in the village do the same, in a process that takes up to 20 days. Grapes that aren’t preserved are either eaten or dried and made into raisins.
The seasonal scene can be bucolic, and Ahmadi has childhood memories of his father returning from the vineyards with fresh grapes. But it takes place amidst the country’s succession of wars and conflicts, which have made family life difficult. 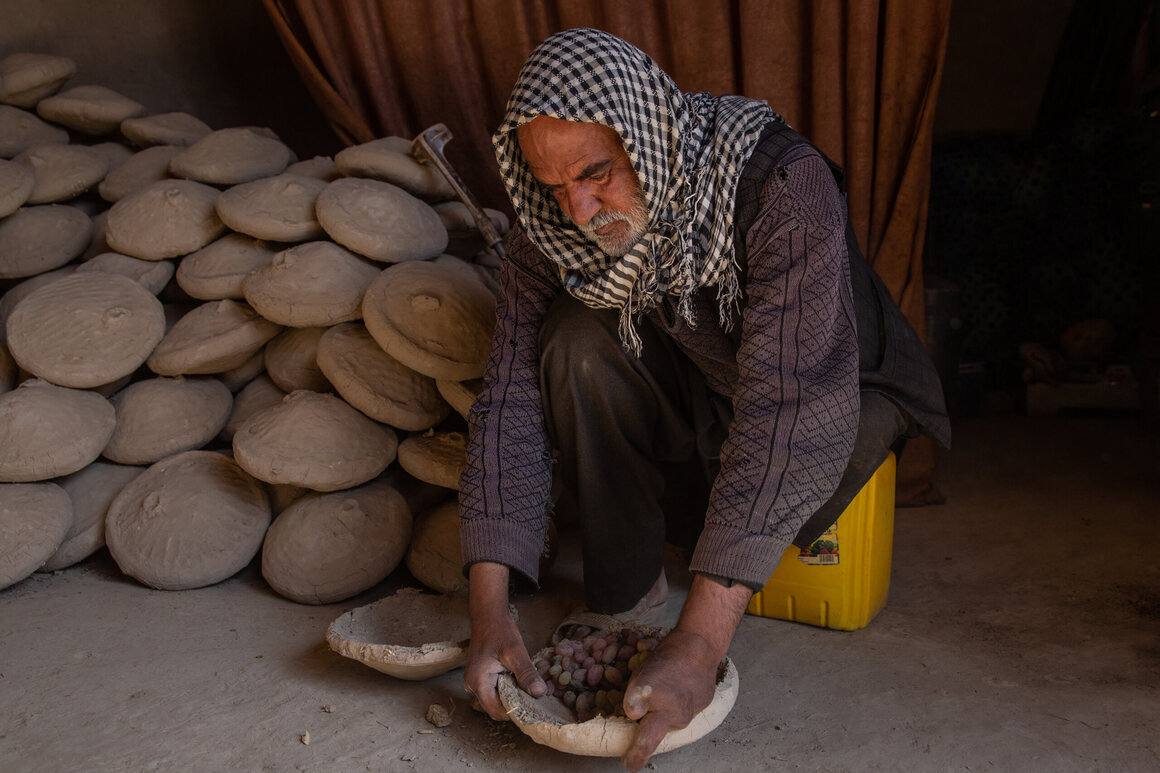 Ahmadi gently taps the mud bowls to crack them open.

* * * During Afghanistan’s civil war in the 1990s, Ahmadi stepped on a roadside mine while traveling to the eastern Nangarhar Province. It blew off his left leg and severely injured his arms and hands. He only received a prosthetic leg two years ago, at which point he had gotten so used to his old crutches that he rejected using the artificial limb.
“That’s why my whole family helps with the harvest and the grapes,” says Ahmadi. While his family doesn’t own any vineyards, his wife and older children help nearby farmers pick grapes, which Ahmadi purchases at a discounted rate.
“The most difficult time was during the Taliban. Our village became the frontline and we had to flee,” Ahmadi says. In Pakistan, he sold bananas and worked as a brick laborer. “When we returned, our houses were burned down, as were the vineyards. The entire village had to start from scratch.” The family settled back in Afghanistan after the American-led invasion in 2001, but the war never stopped, and the family fears that they could face more violence. 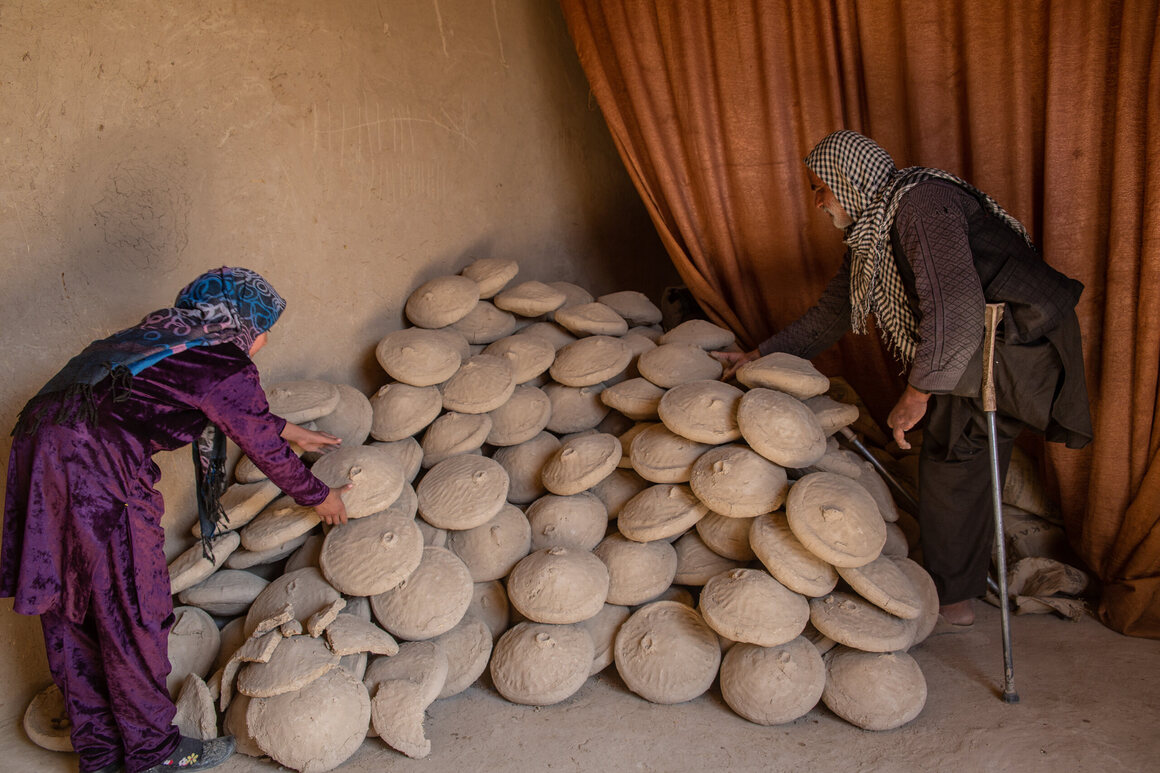 Sabsina shows where the family stores the kangina: in a dry, cold space, away from direct sunlight.

* * * Still, Ahmadi expects his children will one day take over his kangina business, and the Nowruz celebration this year is special: According to the Solar Hijri calendar used in the country, Afghanistan is ringing in a new century, the year 1400.
Nowruz is usually a large family gathering where food and gifts are exchanged. It is also celebrated by heading into the mountains for picnics, reading poetry, and eating Haft Mewa, a compote made from seven types of dried fruits, including grapes.
“This year’s celebration will be special,” Ahmadi says. “We’ll only see a new century once in our lifetime.”
I ask if he has any wishes for the new year. “A plentiful harvest,” he answers. “And peace for our country.” 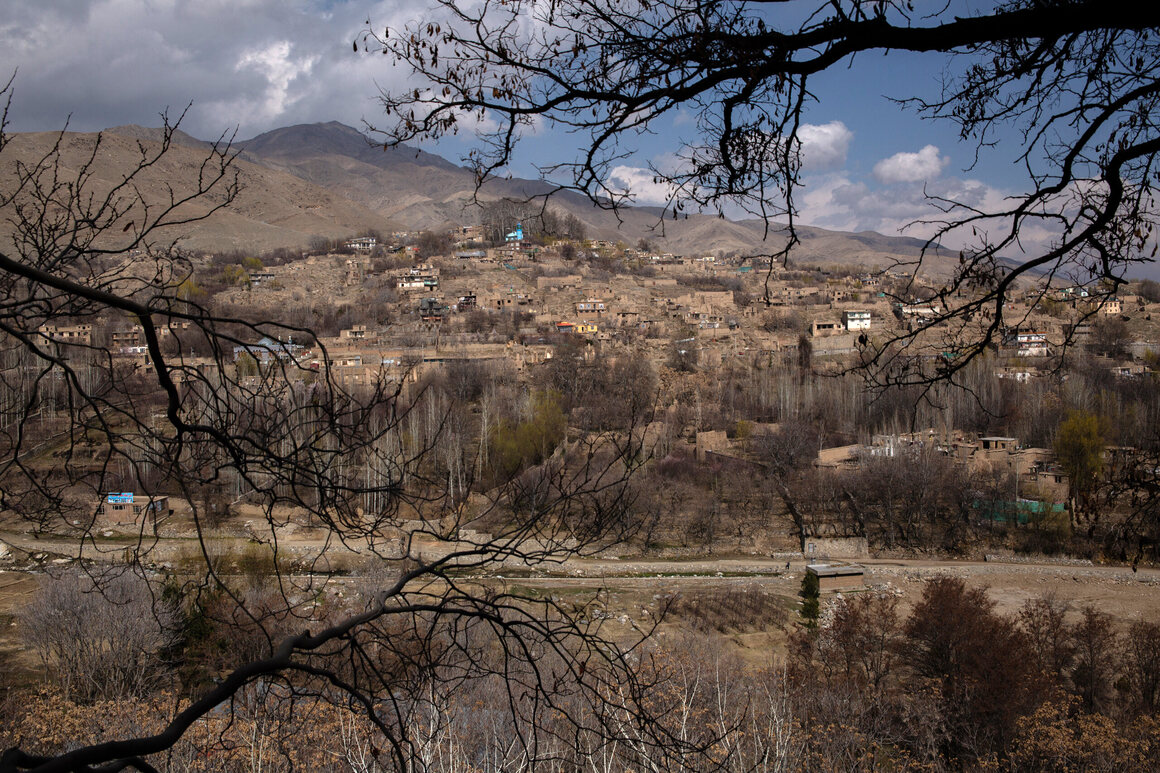 The town of Istalif is part of the Shomali Plain where Ahmadi and his family live.

* * * Gastro Obscura covers the world’s most wondrous food and drink.
Sign up for our email, delivered twice a week.

Supplier to U.S. Forces in Afghanistan Shipped Through Iran - WSJ.com...

online.wsj.com 25/09/2013 News
By JAY SOLOMON and NATHAN HODGE The company that holds the multibillion-dollar Pentagon contract to supply U.S. forces in Afghanistan...View Details» 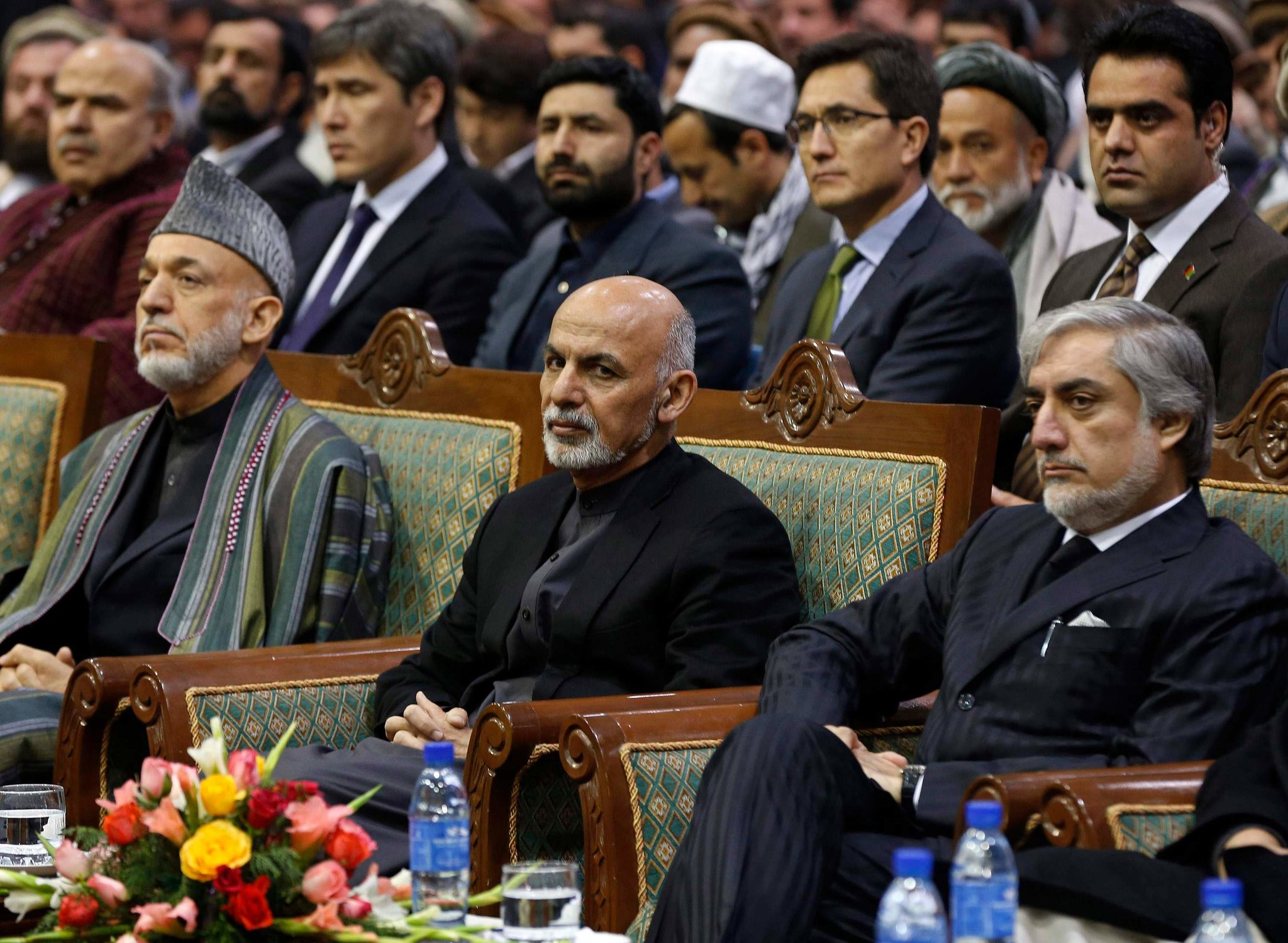 nytimes.com 14/03/2015 Military
By MATTHEW ROSENBERGMARCH 14, 2015 WASHINGTON — In the spring of 2010, Afghan officials struck a deal to free an Afghan diplomat held hostage by Al Qa...View Details»

lawfareblog.com 01/09/2014 Politics
By Sumitha Narayanan Kutty Sunday, August 31, 2014 at 10:00 AM Editor’s Note: The United States plans to draw down its military forces in Afghanistan ...View Details»