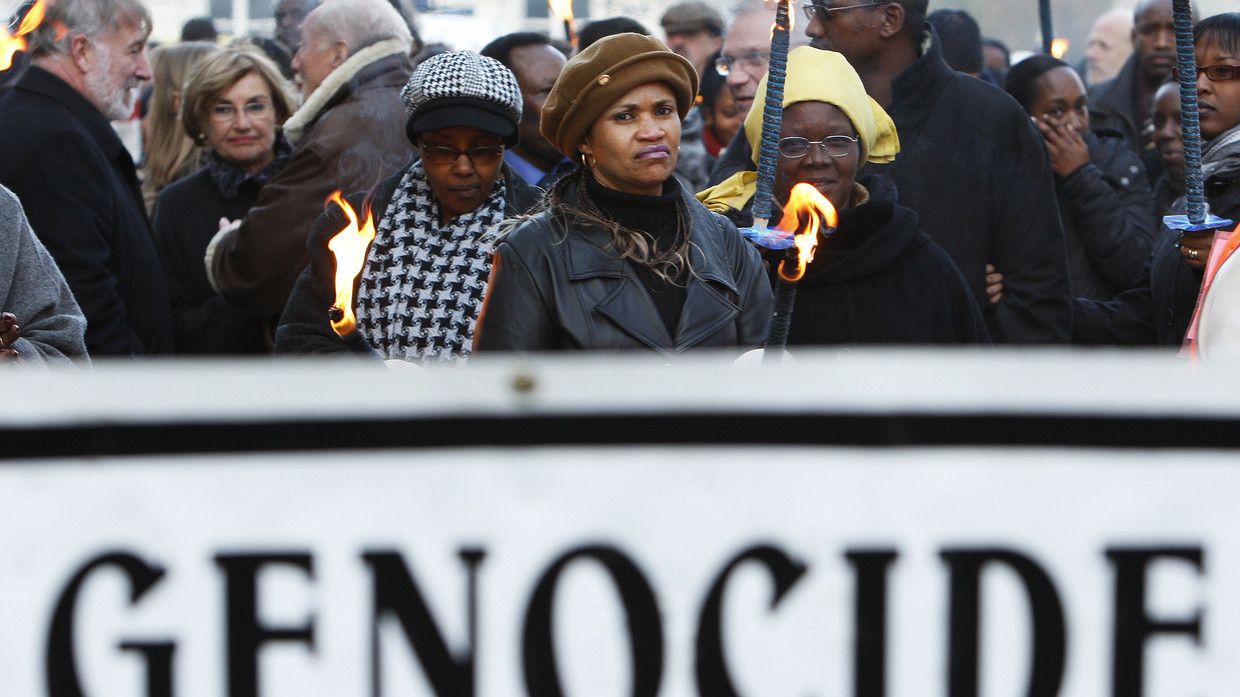 A Rwandan government-commissioned report on the 1994 genocide has accused France of “enabling” the slaughter, going further than a recent French report that held the country responsible but stopped short of judging it complicit.
France holds “significant” responsibility for “enabling a foreseeable genocide,” states the 600-page Rwandan report, which was published on Monday. It documents the role of French authorities prior to, during, and after the massacre, which saw an estimated 800,000 people killed between April and July 1994.
It contends that France “did nothing to stop” the killings, mainly of the ethnic Tutsi minority, and, in the years since, has attempted to distort truths and cover up its role, and even extended protection to perpetrators, drawn from extremists in the majority Hutu population.
It also accuses former French president François Mitterrand and his administration of supporting, funding, and training the government of then-Rwandan President Juvénal Habyarimana, despite “warning signs,” and being aware of the preparations being made for the slaughter.
“The French government was neither blind nor unconscious about the foreseeable genocide,” opines the new report, which comes less than a month after a French report concluded that France had “heavy and overwhelming responsibilities” but cleared it of complicity in the killings.
“Is France an accomplice to the genocide of the Tutsi? If by this we mean a willingness to join a genocidal operation, nothing in the archives that was examined demonstrates this,” it stated.
Commissioned in 2017, the French report accused the authorities of pursuing their “own interests, in particular, the reinforcement and expansion of France’s power and influence in Africa.” Even at the height of the killings, they “did nothing to stop” the massacres, it said.
However, the authors found “no evidence that French officials or personnel participated directly in the killing of Tutsi during that period.” Nonetheless, they strongly criticized the French government for not having declassified documents about the genocide. The Rwandan government had submitted three documentation requests between 2019 and 2021 that were “ignored”, according to the report.
“Maybe the most important thing in this process is that those two commissions have analyzed the historical facts, have analyzed the archives which were made available to them, and have come to a common understanding of that past,” Rwanda’s Foreign Affairs Minister Vincent Biruta told the Associated Press news agency. “From there, we can build this strong relationship,” he added.
The Rwandan Genocide, also sometimes known as the genocide against the Tutsi, occurred between 7 April and 15 July 1994 during the Rwandan Civil War. During this period of around 100 days, members of the Tutsi minority ethnic group, as well as some moderate Hutu, were slaughtered by armed militias. The most widely accepted scholarly estimates are around 500,000 to 600,000 Tutsi deaths.
In 1990, the Rwandan Patriotic Front (RPF), a rebel group composed of Tutsi refugees, invaded northern Rwanda from their base in Uganda, initiating the Rwandan Civil War. Neither side was able to gain a decisive advantage in the war, and the Rwandan government led by President Juvénal Habyarimana signed the Arusha Accords with the RPF or Rwanda Patriotic Front on 4 August 1993. Many historians argue that a genocide against the Tutsi had been planned for at least a year. However, Habyarimana's assassination on April 6, 1994 created a power vacuum and ended peace accords. Genocidal killings began the following day when soldiers, police, and militia executed key Tutsi and moderate Hutu military and political leaders.
The scale and brutality of the massacre caused shock worldwide, but no country intervened to forcefully stop the killings. Most of the victims were killed in their own villages or towns, many by their neighbors and fellow villagers. Hutu gangs searched out victims hiding in churches and school buildings. The militia murdered victims with machetes and rifles. Sexual violence was rife, with an estimated 250,000 to 500,000 women raped during the genocide. The RPF quickly resumed the civil war once the genocide started and captured all government territory, ending the genocide and forcing the government and genocidaires into Zaire.
The genocide had lasting and profound effects on Rwanda and neighbouring countries. In 1996, the RPF-led Rwandan government launched an offensive into Zaire (now the Democratic Republic of the Congo), home to exiled leaders of the former Rwandan government and many Hutu refugees, starting the First Congo War and killing an estimated 200,000 people. Today, Rwanda has two public holidays to mourn the genocide, and "genocide ideology" and "divisionism" are criminal offences. Although the Constitution of Rwanda claims that more than 1 million people perished in the genocide, researchers state that this number is scientifically impossible and exaggerated for political reasons.
--- ---
... plus.google.com 15/10/2014 Health
The Ebola virus first appeared during two 1976 outbreaks in Africa. It gets its name from the Ebola River in Democratic Republic of Congo. Ebola is a ...View Details»