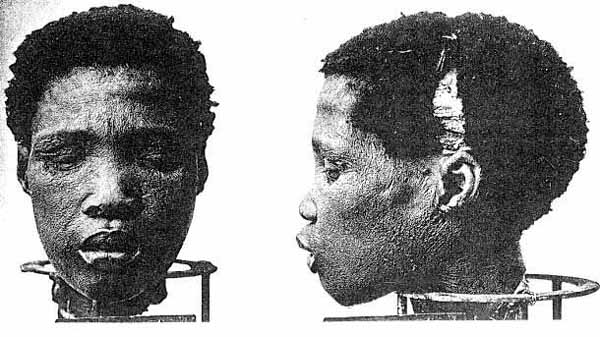 By Elliot Hannon
More than a century after carrying out a mass killing in what is now Namibia, Germany announced Friday that it now officially recognizes the massacre in its former African colony as a genocide. The German acknowledgment took six years of negotiation between the two countries’ governments over how to classify the German Empire’s atrocities in the early 20th century that included the killing of tens of thousands of Herero and Nama people, a toll that some historians estimate amounted to more than 75 percent of the groups’ populations at the time. In addition to the formal acknowledgment, the German government said it’s creating a billion-dollar fund to support the affected communities.
“We will now officially refer to these events as what they are from today’s perspective: genocide,” Germany’s foreign minister, Heiko Maas, said in a statement. “As a gesture of recognition of the immeasurable suffering inflicted on the victims, we want to support Namibia and the victims’ descendants with a substantial program of 1.1 billion euros for reconstruction and development.”
The admission by the German government comes amid growing calls for former colonial powers to more forcefully—and accurately—account for decades of murderous, extractive colonial relationships across the continent whose impact lingers to this day. The move toward greater accountability has been slow and far from universal, however, as other countries, like the U.K., have seen a resurgence of colonial nostalgia with Prime Minister Boris Johnson often minimizing the harm done by the British Empire. Nostalgia, or more precisely historical amnesia, has also been a powerful political force in the U.S. in grappling with its history, a conversation that has been thrust more directly into the mainstream of the American political discourse in response to Donald Trump’s unabashed racial politics.
On a trip to Rwanda, a former French colony, this week, French President Emmanuel Macron admitted that France bore some responsibility for the country descending into genocide in 1994, which killed 800,000. Germany went one step further in recognizing its violent role in the country it occupied from 1884 to 1915, killing tens of thousands of Herero and Nama people who were trying to protect their land being stolen. The head of the German military administration in the area at the time called for the extermination of both groups, while those who survived the onslaught were pushed into concentration camps in the desert.
The response to the announcement in the Namibian capital of Windhoek was measured. A government spokesman said “the acceptance on the part of Germany that a genocide was committed is the first step in the right direction.” The other step that descendants of the victims have demanded is reparations, noting the difference in tone the German state has struck in its apologies and financial commitments to victims of the Holocaust. Germany has insisted throughout its negotiations that declaring its actions a genocide does not open it up legally to reparation demands. “We’re talking about an event that happened 100 years ago,” the German special envoy for the genocide talks with the Namibian government said on the German public broadcaster Deutschlandfunk in 2018. “And for this reason we can’t consider personal reparations and we see the question over which we’re negotiating as a political and moral, not a legal one.”
A development fund roughly the equivalent of $1.35 billion to be paid out over 30 years is not considered sufficient for the communities affected who have tried, so far unsuccessfully, to make their case through the American federal court system. “The so-called ‘compensation’ to finance ‘social projects’ is nothing but a coverup for continued German funding of Namibian Government projects,” the statement from the Ovaherero Traditional Authority and the Nama Traditional Leaders Association read. “Germany must pay reparations for the genocide.”
---The Namibian government said it was “the first step in the right direction.” ---...