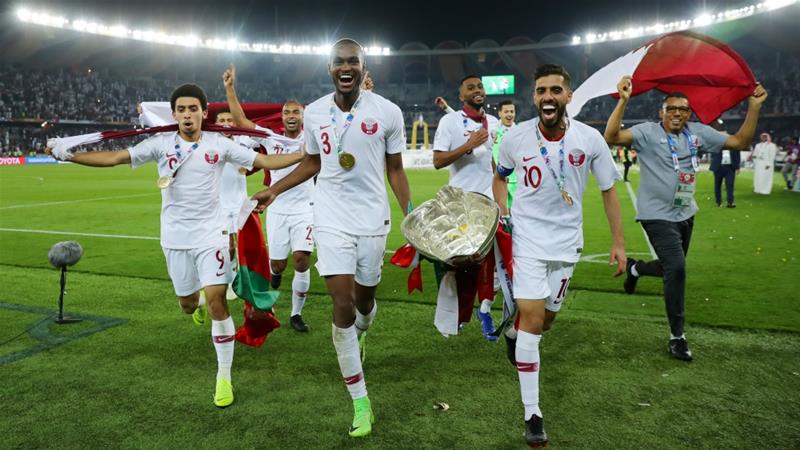 The Maroons beat four-time champions Japan 3-1 to clinch their first Asian Cup football tournament.
Qatar scored 19 goals in the tournament and beat teams ranked well above them [Francois Nel/Getty Images]
Qatar have stunned four-time champions Japan 3-1 in the final of the AFC Asian Cup held in the United Arab Emirates (UAE) to lift their maiden title at the continental tournament.
Striker Almoez Ali opened the scoring for the Maroons on Friday in the Emirati capital, Abu Dhabi, with a spectacular overhead kick - his record ninth goal of the tournament.
Ali's 12th-minute strike took him past Ali Daei's 1996 tally, and combined with a 27th-minute strike from Abdulaziz Hatem and a late Akram Afif penalty, helped the Qataris make an emphatic statement ahead of their hosting of the 2022 World Cup.
The Sudan-born 22-year-old Ali's record goal came after a complaint by the host UAE Football Association about his eligibility to represent Qatar was dismissed by the Asian Football Confederation (AFC) only a few hours before kickoff.
ألف مبروك لمنتخبنا ولقطر وشعبها هذا الفوز التاريخي بكأس آسيا ٢٠١٩ .. ألف تحية لأبطالنا وللجهازين الفني والإداري الذين جعلوا هذه البطولة إنجازا عربيا وقدموا ملحمة كروية مثيرة وحققوا أحلام الملايين من مشجعي الكرة القطرية عبر الوطن العربي الكبير..
— تميم بن حمد (@TamimBinHamad) February 1, 2019
Japan finally found a way through a Qatar defence that had not conceded in six previous matches when Takumi Minamino scored in the 69th minute but the penalty condemned the Samurai Blue to their first defeat in an Asian Cup final.
'Historic victory'
"Congratulations to all the people in Qatar for their support for all of us and the players for the seven games they had," Qatar's coach Felix Sanchez said after the match. "This result in a game like this is a huge, huge result for us."
"Today we made history, history for our country so we need to be very proud of our achievement," the Spaniard added.
Qatar's Emir Sheikh Tamim bin Hamad Al Thani congratulated the national football team for an "historic victory".
"A tribute to our heroes who made this tournament an Arab achievement and... realised the dreams of millions of Qatari football fans across the great Arab world," Sheikh Tamim wrote on his personal Twitter account.
And the #AsianCup2019 celebrations are only just starting in Qatar. It’s going to be a long, noisy evening!! ⁦@AJEnglish⁩ pic.twitter.com/Fa7hLD6wA5
— Faras Ghani (@farasG) February 1, 2019
Qatar's road to the final had not been without controversy.
Hosts UAE, along with Saudi Arabia, Bahrain and Egypt severed all diplomatic and economic ties with Doha, imposing a land, sea and air blockade on the Gulf nation in June 2017.
The Maroons had to take a circuitous route via Kuwait to get to the tournament, an air journey that took more than five hours when a direct flight would take under an hour.
Playing against the backdrop of that regional political dispute and without any fans in the stands, Qatar beat Saudi Arabia 2-0 in a group match and then thrashed UAE 4-0 in a semi-final that saw shoes and bottles hurled at Qatari players.
Al Jazeera's Andy Richardson, reporting from Aspire Park in Qatar's capital, Doha, said: "Coming into this tournament they were ranked outside of the top 10 in Asia, down at 93 in the world rankings - not much expected of them. But if you looked a little bit deeper there were signs this was a team on the rise."
Qatar will host the FIFA World Cup in 2022, becoming the first Arab country to do so.

Kingdom of Slaves in the Persian Gulf | The Nation...