Hundreds of teachers and students stage protests across the country against Monday’s military take over of civilian government.
People across Myanmar, including teachers and students, have staged protests as shows of anger gathers pace against the military coup and the subsequent detention of senior democratic leaders, including de facto leader Aung San Suu Kyi.
Earlier on Friday, Win Htein, considered a right-hand man of the overthrown leader, was arrested and at least 30 other people detained in the second city of Mandalay over pot-banging protests on Thursday.
Wearing red ribbons and holding up protest signs, hundreds of teachers and students gathered in front of campus buildings at the Yangon University of Education on Friday.
“We don’t want this military coup which unlawfully seized power from our elected government,” said lecturer Nwe Thazin Hlaing.
“We are no longer going to work with them. We want the military coup to fail,” she added, surrounded by other staff members who held up three-finger salutes, now used by many protesters in Myanmar. 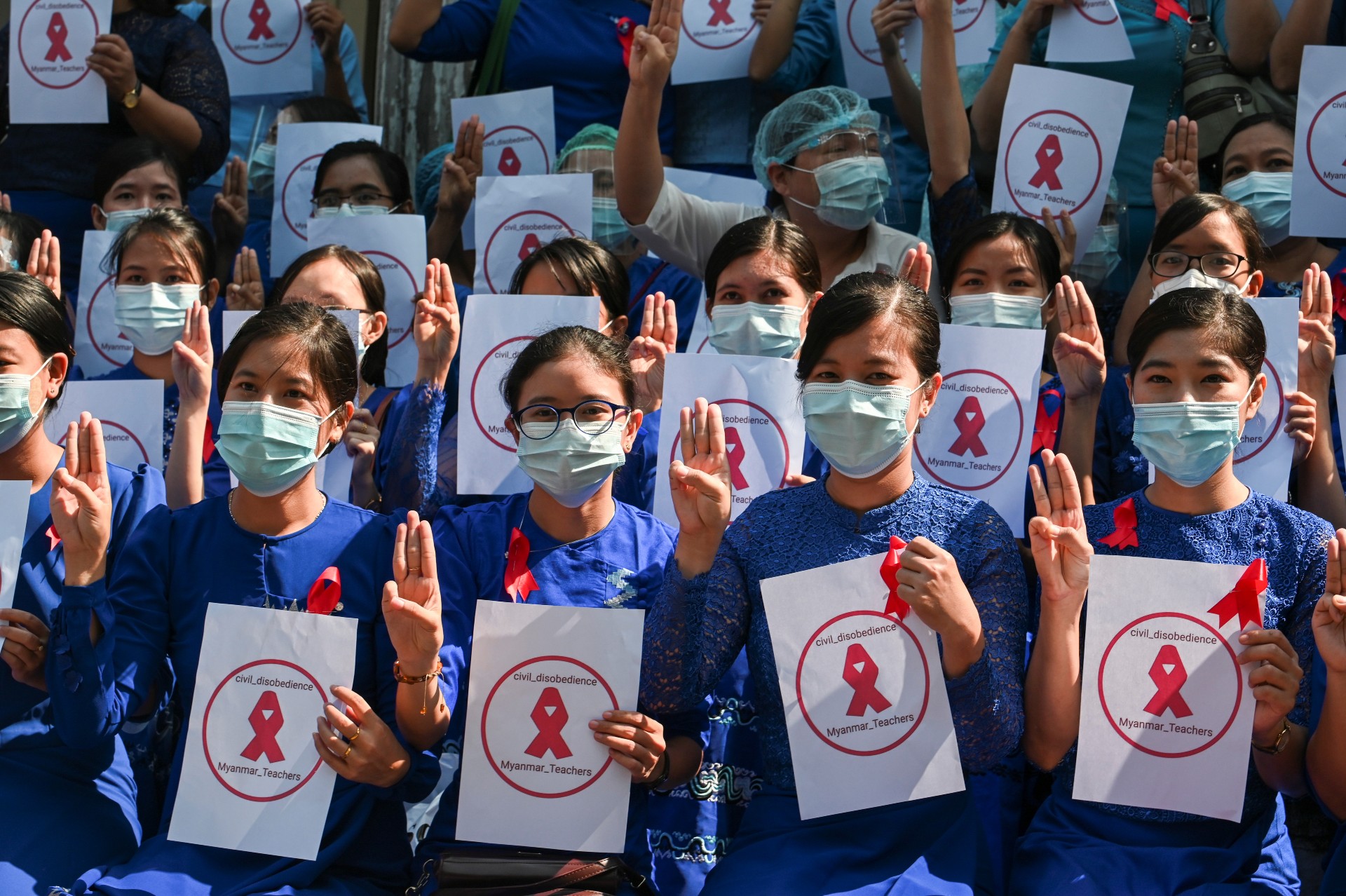 The salute – three fingers pointing up with palm away from the body – stems from the Hunger Games movies, but in recent years, it has been adopted by protesters against authoritarian rule in Asia.
One member of staff estimated 200 of the 246 staff at the university joined the protest.
“We aim to halt the administration system. We are now holding a peaceful strike,” said another lecturer, Honey Lwin.
There were also reports of a similar protest at Dagon University in Yangon.
Doctors and teachers
The opposition among professional groups like doctors and teachers comes as there have been other, less formal protests including by people banging cans and saucepans and honking car horns to signal their opposition to the coup.
There has been no outpouring of people onto the streets in a country with a bloody history of crackdowns on protests, but there were signs of coup opponents growing bolder – with dozens of youths parading in the southeastern city of Dawei on Friday.
“We declare that we start our fight for democracy today in Dawei. We urge the people to join and stand with us,” said one protester.
Myanmar diaspora groups have organised protest in neighbouring Thailand and India as well as Indonesia and South Korea.
About 70 members of Parliament of Suu Kyi’s National League for Democracy (NLD) also defied the military on Thursday, as they convened a symbolic Parliament at their compound in the capital, Naypyidaw, signing a pledge they would serve the people.
The military seized power on Monday, detaining Suu Kyi and President Win Myint and bringing to an abrupt halt an uneasy dalliance with democracy that had followed decades of oppressive military rule.
Suu Kyi, 75, has not been seen since her arrest on Monday. Police have filed charges against her for illegally importing and using six walkie-talkie radios found at her home.
The military has alleged the November parliamentary elections, which the NLD won in a landslide, was rigged. They have not provided any evidence to back their claims. The electoral body has also rejected military claims.
‘Refrain for violence’
International pressure on the military government was also growing with the UN Security Council calling for the release of Suu Kyi and other leaders and US President Joe Biden considering sanctions on the ruling generals.
“The Burmese military should relinquish power they have seized, release the advocates and activists and officials they have detained, lift the restrictions in telecommunications, and refrain from violence,” Biden said.
On Friday, the leaders of Malaysia and Indonesia asked the foreign ministers of Southeast Asia countries to hold a special meeting to discuss Myanmar’s coup to maintain political stability in the region.
“Indonesia and Malaysia take the political situation in Myanmar seriously,” Malaysian Prime Minister Muhyiddin Yassin said after meeting with Indonesian President Joko Widodo in Jakarta. “This is a step backwards in Myanmar’s democratic transition. We fear the political unrest in Myanmar could disturb the security and stability in this region.”
Muhyiddin said he and Widodo have asked their foreign ministers to talk to the chair of the Association of Southeast Asia Nations to set up a special meeting of foreign ministers to address Myanmar’s political turmoil.
ASEAN’s members are Brunei, Cambodia, Indonesia, Laos, Malaysia, Myanmar, the Philippines, Singapore, Thailand and Vietnam. Brunei is chair of the bloc this year.